Fan vs Athlete: The Lessons of Patrick Roy and Jason Spezza 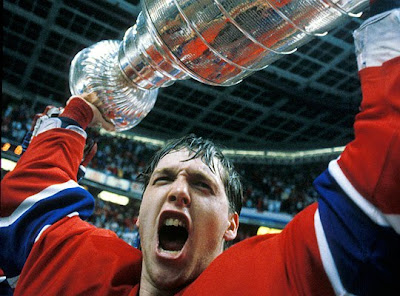 I don't necessarily want to revisit the worn topic of Senators fans booing Jason Spezza, which boiled over to the point where a mutually agreed trade out of town became a very real possibility this past summer.

But there's more to this story than the local skirmish it caused. Something that goes to the heart of all spectator sports and the increasingly strained relationship between fans who feel entitled to express themselves freely (believing that money has bought them that imaginary right), and the athletes who feel entitled to work in an environment that's free from constant hostility (believing they've worked all their lives for that right as well).

It's extremely rare to hear an athlete admit that the reaction of the crowd has gotten to them. Modern athletes almost unanimously claim that booing fans don't bother them, that their inherent professionalism acts as a wall against any negativity thrown their way by the beer soaked inhabitants of the upper stands.

They almost always trot out the tired line that "fans pay good money so they have the right to do what they want".

But anyone with an ounce of logic can see the defense mechanism a mile away. Athletes are just as sensitive as the rest of us. Don't buy the line for a minute.

So do fans really have the right to say anything they want? How far does that extend?

The first relevant quote here is from Ken Dryden's famous book The Game:


I am a professional, paid to do my job no matter the circumstances. ... I do only what I can. And by buying a ticket, does a fan acquire a right that a fan in the street has not? Opportunity, yes; access, yes; but any greater right? Does he acquire license to abuse me any way he likes, to say what he won't say to anyone else, anywhere else? Is that what I'm paid for, like a lightning rod, to stand in the place of everyman and attract and purge the resentments from his life? Am I supposed to take it and feel nothing? Is that all part of the game?

Maybe, the author quoted below, Michel Roy, father of Hall of Famer Patrick Roy, puts it more plainly, but no less importantly:


There's a difference between criticizing an athlete's poor quality of play and vilifying the athlete. Some spectators, for whom hockey is a release, fail to make that distinction. They take revenge on a third party for frustrations they are suffering at the hands of a boss, a spouse, a teacher, a colleague, a friend.

The context of Roy's quote (taken from his excellent book, Winning: Nothing Else)  is from the 1995 trade of his son Patrick, from the Montreal Canadiens to the Colorado Avalanche. During that season, inexperienced coach Mario Tremblay seemingly had it out for Patrick from the beginning, which culminated in Tremblay embarrassing the goalie by not pulling him during a 9-1 drubbing at the hands of the powerhouse Scotty Bowman-led Red Wings (Tremblay also had a near hysterical hatred of Bowman from when he toiled under the legendary coach as a player for the Canadiens in the 70's). When Tremblay finally pulled Roy (and after the goalie had stood up to the jeers of the hostile fans by raising his arms after a routine save), all hell broke loose on the bench as the goalie marched up to Team President Ronald Corey and said he had just played his last game for Montreal.

The Montreal fans and the rookie GM Rejean Houle were all too happy to comply with Roy's impulsive wishes and the club even hired a public relations firm to skew the media message, making Roy out to be the bad guy, similar to what Peter Pocklington tried to accomplish with the Wayne Gretzky trade less than ten years earlier.

The fans, despite having watched Roy deliver two near-miracle Stanley Cups in ten seasons that were totally dominated by either the Oilers or the Penguins, had a love/hate relationship with the goaltender and opinion at the time was largely supportive of the trade, logic and loyalty be damned.

Of course, we all know how that turned out for the Habs and their fans (many of whom would be loathe to admit supporting the trade in a revisionist history lesson, much like Senators fans won't admit to wanting Daniel Alfredsson out of town during a slump early in the 2006-2007 season).

Roy went on to win a Stanley Cup that very season in Denver and added one more for good measure in 2001. The Habs meanwhile, never really recovered from the disastrous trade and the even more disastrous hirings of Houle and Tremblay (neither of whom had any experience in their jobs prior) to run the franchise. They are only now getting back their respect around the league after a Cinderella-like playoff run thanks to another red hot goalie, Jaroslav Halak, who they then turned around and traded to the Blues this summer. Oops.

The Montreal fans seemed to have learned their lesson and likely know what got away from them this time.

Perhaps down in Ottawa, the fans have pulled themselves back from the brink of running their best offensive player out of town, and maybe saving themselves ten years of grief looking for another one to replace him.
Posted by Jeremy Milks at 9:10 PM 8 comments: 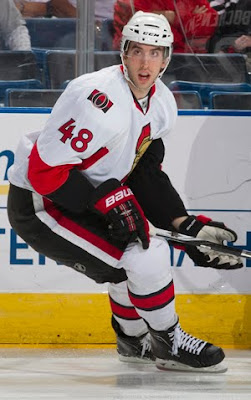 With the loss of defensemen Anton Volchenkov and Andy Sutton, many Senators fans may be looking to a big body like Jared Cowen to possibly make the roster to make that back-end look more imposing.

I'm not discounting the kid - he may very well surprise and beat Chris Campoli for a spot. But Cowen's salary is going to work against him.

If Cowen makes the team and hits all his performance bonuses, the Senators would be on the hook for all of his 1.295 cap hit. Even if he doesn't hit his bonuses, he'll be a cap hit of just over 900 grand. That's a lot of dough when you consider the Sens (according to Cap Geek) are less than a million under the cap as of right now.

If you look at the money side of it, newly signed David Hale might make more sense for the Senators this season. Hale is cheaper (675 grand) and is a fairly robust physical player himself. Even Brian Lee (the horror), currently on a one-way deal, is a potentially cheaper option, making under 900 grand for the year.

If you look at the forwards, the Senators signed the much sought after Bobby Butler out of the college circuit and it looked like he would follow in the footsteps of Jesse Winchester in being eased into the lineup almost right away. But Butler will make 900 grand in the NHL if he makes the team, considerably more than the aforementioned Winchester, Ryan Shannon and Zack Smith, the players he will be competing against for a roster spot.

If the payroll remains status quo, I don't like the chances of seeing either Jared Cowen or Bobby Butler on the opening night roster unless their play in training camp so impresses Bryan Murray that he is forced to move some salary out to accommodate them.

Hopefully for their sake, they make Murray's choice tough.
Posted by Jeremy Milks at 10:13 PM 4 comments: