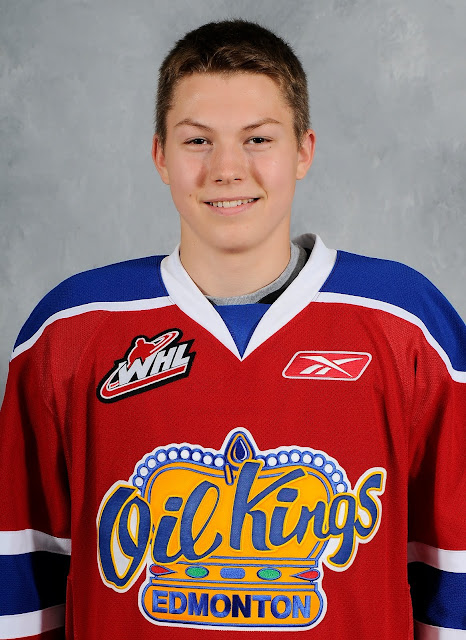 The rumoured deal to move up in the draft didn't work out for the Senators so GM Bryan Murray decided to play it safe and pick Curtis Lazar from the Edmonton Oil Kings, a guy who physically looks like a mix between Chris Neil and Zack Smith but has a set of hands that might allow him to score a few more goals at the NHL level.

You could have been fooled into thinking he was raised in Carleton Place or Arnprior (just look at the guy, eh?) when he sat down with TSN's James Duthie for the traditional post-pick interview, but the genial, aw shucks kid was born far from the Ottawa Valley in Vernon, B.C. There's that temptation when you look at him and hear him talk to envision a Zack Smith-type leading the charge on the third line in about 3 or 4 years, but Smith never scored 38 goals in junior like Lazar did last year.

Lazar has average size at 5'11 and 195 pounds but all scouting reports I've read so far say he's not afraid to drop the gloves or be involved physically. Obviously a 38 goal season in the WHL doesn't necessarily translate into the NHL but the potential for offense and physicality in one package is undoubtedly what made Bryan Murray opt for Lazar over someone like Anthony Mantha, a 50-goal scorer in the QMJHL, who was still available. Murray also passed over Kerby Rychel from Windsor, a guy with better stats and better size than Lazar.

Clearly there was something about Lazar's character that they valued over the obvious advantages of Rychel's stats. Some people groan and moan about hockey's obsession with "character" over numbers but the ISS had Lazar ranked 12th, well above Rychel and Mantha, and the Hockey News had him ranked 9th. For the Ottawa Senators to get him at 17th appears to be a minor steal at this point but here's where we trot out the old cliche about not knowing who wins and loses the draft until 4 or 5 years. You know the drill.

The Senators already have a lot of high-end skill on the right side of 30 in Mika Zibanejad, Jakob Silfverberg, Kyle Turris, Erik Karlsson, Matt Puempel and Jean-Gabriel Pageau among others. Sure, they need scoring NOW but you won't address that in the draft for the following season. The Senators made what everybody who watches junior hockey seems to agree is a "safe pick", and Bryan Murray made a point to call Lazar "dependable" in the initial Duthie interview and I'm sure we'll hear a lot more of those phrases in the media in the next few days.

Lazar has been compared favourably to Ryan O'Reilly and Dave Bolland and famously fought the bigger Darnell Nurse in the Junior Prospect Game. If the hockey gods were trying to make Lazar appeal to someone like myself, that's not a bad start.

At first glance, it doesn't seem like the most glamorous pick but it rarely is at 17th anyways. It's hard to find anybody with something bad to say about Lazar and these are the kinds of guys coaches love - responsible but with potential to score goals.

That seems to sum up Lazar right now and I'd be shocked to find anybody overly disappointed in the pick.
Posted by Jeremy Milks at 6:00 PM 2 comments: 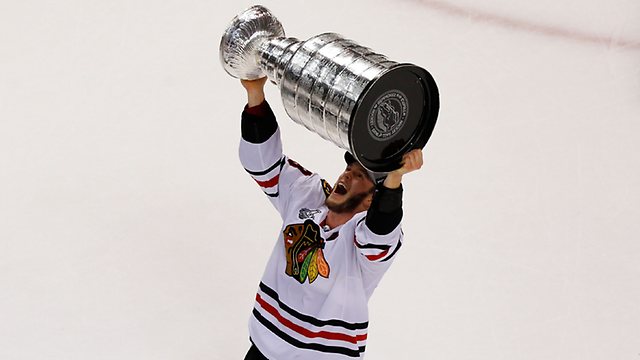 In case you crashed out and missed the final Hockey Night In Canada closing montage of the playoffs, here it is and it's worth catching up on. It must have cost a ridiculous amount of money to license one of the greatest songs of all-time from The Rolling Stones, and it would have been a hard sell to CBC execs considering it was aired in the early hours when only the drunken maniacs and die-hards are still awake to soak up every last visual of the season.

But HNIC does everything with class and that's how they rolled out of another great season on the air. You could put this song to a video of Jacques Martin eating Muslix and you'd still be moved.

There's a few great Senators moments in here, including Chris Neil screaming "Let's see how tough you are in Ottawa!" and, of course, the monstrous demolition of Lars Eller by Eric Gryba in the first round.

Congratulations to the Chicago Blackhawks, and to an old fave of mine, Ray Emery, for winning the only trophy that matters.

Black Aces will be around offering a take on any major Senators draft news or signings in the next few weeks.
Posted by Jeremy Milks at 3:05 PM 1 comment: