Dorion’s Revenge And Other Notes On Inebriation 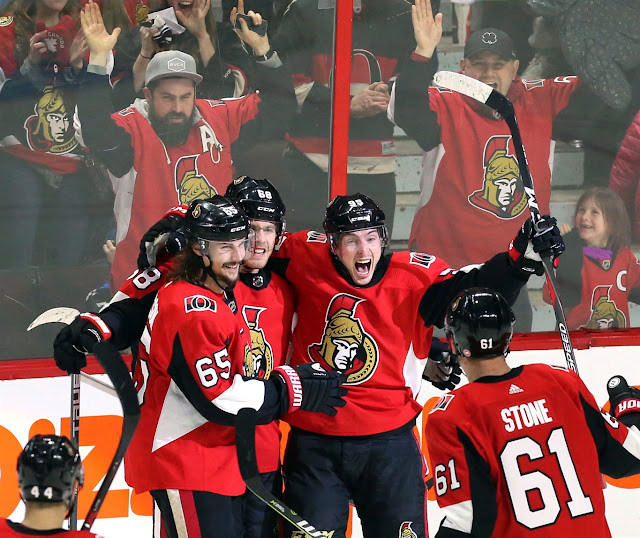 “Looks like I picked the wrong week to quit amphetamines”.

Lloyd Bridges says this matter-of-factly in the movie Airplane, as the surreal events spiral so out of control that the only logical recourse is to turn to heavy narcotics. Or lament their absence.

Now I’m not saying Ottawa Senators fans are living through their own version of Airplane, because at least that movie had laughs, but many fans have already turned to a variety of pharmaceuticals to make sense of the surreal situation they find their infamous team in. You can see it as they fidget in their seats at the CTC, staring blankly at the shiny lights and nervously adjusting their ratty toques. You can see it in the machine-gun style tweets lacking syntax or coherence, or even a GIF attachment.

Already traumatized by a summer where the most popular and best-looking player in team history was traded for reasons that are still not ultimately clear, Sens fans now face a second death march into oblivion as the remaining fan favourites are set to be moved by the trade deadline.

Mark Stone, Matt Duchene and Ryan Dzingel, all unrestricted free agents come July, are certainly headed out the door by February 25. Why such a dire prognostication? And from this very writer who makes it a point to be blissfully optimistic at almost every opportunity, even annoyingly so?

The reason lies in the inescapable fact that if any of those guys were going to sign with Ottawa, it would have happened by now. With the team dying for a good news story, with season-ticket sales reeling from a toxic fan atmosphere and the sudden decrease in the handsomeness ratio, GM Pierre Dorion has no reason to keep fans in cinematic suspense. Chances are Dorion has already presented his best offer to both Duchene and Stone and both offers have been rejected by their cigar smoking agents.

It’s the old Occam’s Razor theory: the most obvious answer is most likely to be correct. You can theorize as to why Mark Stone didn’t sign a long-term contract this past summer, or January 1st when the next opportunity arose. You can make arguments that it’s difficult to negotiate signing bonuses with a lockout on the horizon and even more difficult for Stone to accept the team captaincy, endless money, the key to the city, free Golden Palace eggrolls and complete and total adulation from men and women alike. Tough sell for a 26 year old.

More likely it’s that Stone has decided to move on. And so has Duchene. Dzingel is just waiting in the background, the third wheel this domestic drama. Dorion may not even have the time to trade him.

Ahhh… this is getting too gloomy. “It ain’t over till it’s over”. Picture a faded poster on a wood-panel wall in a basement that shows a cat hanging off a tree branch that says “Hang in There”. It’s super cute.

Picture Pierre Dorion calling a press-conference and on either side of him is Stone and Duchene (with the C and A on their respective jerseys). The two players are smiling, rich beyond their wildest dreams, but Dorion is smiling deviously, staring down the local press sitting in chairs before him, the naysayers who predicted this press conference would never happen. Even worse, in the back rows sit the dreaded Digital Influencers, the twitter and podcast nerds who have never even known the acrid, decaying smell of hockey skates stink-baked into a fine bouquet. Everyone is wrong and Pierre finally gets the chance to tell them, in both English and French.

Even Dzingel, sitting at the end of the table and cut out of most press pictures, has a new multi-year contract (but they forgot to give him a hat and a glass of water).

This could all happen still.

Thousands of Sens fans could finally kick their opiod and alcohol habits and renew relationships with their spouses after a year and a half of dark civility. The Sens may have to call in the police to squelch the riot of ticket buyers trying to pry open the doors at the CTC at 6 in the morning when it’s -32 with the wind chill.

Eugene Melnyk, John Ruddy and Jim Watson each do a staged shot of Wild Turkey and slap each other on the back before locking arms and doing a traditional Russian dance with lots of choreographed kicks and shouts. The press are so taken with this display that Don Brennan even joins in the line dance and everybody has a good-natured laugh at just how fun this day has turned out to be.

Erik Karlsson refuses to sign in San Jose because he believes Dorion and Melnyk will take him back this summer to join a team that is being labelled by outside pundits as the “Harlem Globetrotters of the NHL”. When Karlsson’s agent calls Dorion on July 1st, he has to leave a message and gets cut off before he can finish leaving his number. EK has to sign with Tampa, who have imploded internally because they lost in the first round. They don’t even have a press conference to announce it, let alone any Russian dancing.

The wait we are experiencing for the announcement of the signings is simply bureaucratic. They want to make sure they have the freshest Alaskan Crab for the press conference and Paul Anka is not available to fly in until next week.

You’re an impatient, ungrateful lot aren’t you? Just look at you, scratching your necks feverishly, waiting for you next fix, unable to concentrate without refreshing Twitter every few seconds.

You must think I’m an idiot. Well, guess what?