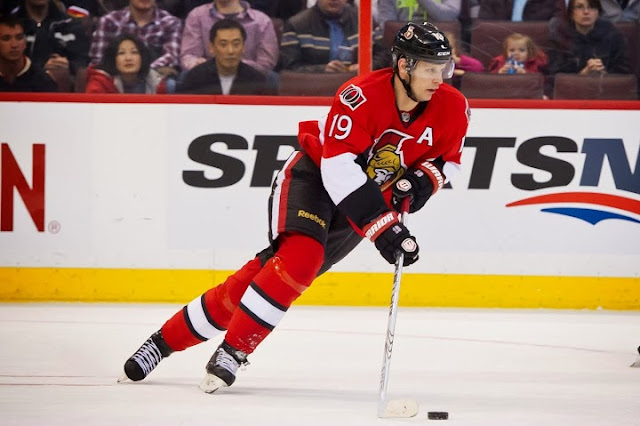 They’ve barely wiped the blood off the floor from the Daniel Alfredsson bar brawl that occurred this summer, but hangover or not, the Senators have a lot to get done over the next year or two contract-wise to keep this team moving forward. Here’s where they can start:

1(a) Jason Spezza and 1(b) Bobby Ryan – Lumping these two together makes sense because if one goes, it may just spur the other to leave as well. They both have 2 years left on their deals before a chance to test the market. Putting the “C” on Spezza won’t automatically ensure his loyalty to the organization or convince him to take less than market value. He’ll want big money and likely want a scoring winger by his side for the duration of his next deal as well. Right now that’s Bobby Ryan and the Senators find themselves in a similar situation to Ryan’s old team, the Anaheim Ducks, who were faced with losing both Ryan Getzlaf and Corey Perry before signing both to huge deals. They made some much needed room by dealing Bobby Ryan this summer and Ottawa may have to wave goodbye to pending UFA Milan Michalek after this season to fit in extensions to Spezza and Ryan, although Michalek’s bad knees may have sealed his fate anyways. If the Senators can’t convince Ryan that Ottawa is the place to play, Spezza may follow Alfredsson right out the door thinking that this team can’t compete for a Stanley Cup. These two deals could be Bryan Murray’s last major mark on the franchise, for good or bad.

2. Jared Cowen – This is a little too obvious because he’s unsigned going into training camp, but his importance beyond this season can’t be overstated. He’ll never surpass Erik Karlsson as the franchise defenseman but he’s going to be the rock back there for many years much like Dougie Hamilton in Boston. It’s not surprising to hear the Senators allegedly offered him an 8-year, $28 million deal. With the cap going nowhere but up and teams falling all over themselves for big, mobile defensemen like Cowen, it would be a good investment for Ottawa to lock him down. But I’m sure Cowen might envision a future where he’s earning around $4-5m a season if his development pans out. He may not be jumping at the chance to lock himself in at $3.5 for close to a decade.

3. Marc Methot – The surprise of last season still has two years left on his deal but the Ottawa native fits in so well with this franchise that it seems a foregone conclusion they’ll want to sign him long-term. In a way, he’s the next Chris Phillips (more on him later). Personality-wise and hockey-wise, Methot and Phillips seem very similar, although Methot is the better player right now. There does seem to be an invisible cap on defensive defensemen so it will be interesting to see how much higher than $3m the Senators would be willing to go, but there’s no doubt he’ll ask for a raise.

4. Colin Greening – Now it gets harder. The former college kid Greening is a UFA after this season and it’s still unclear whether he’s going to be a power-forward on the top two lines or a fourth-liner who plays smaller than his size. He’s already 27 and sometimes needs a kick in the arse from coach Paul MacLean to get out of sporadic funks. He now has both Bobby Ryan and Clarke MacArthur ahead of him on the LW depth chart and Michalek plays the left side as well depending who else plays with Spezza. Unfortunately for Greening, he seems locked into the bottom two lines unless something changes. Yet guys with his size and skill are valuable and there’s no question about his character. He could end up being the replacement for Michalek in a year or even right away, depending on the state of Milan’s knees. But what do you pay him?

5. Chris Phillips – There’s still some good hockey left in the 35 year old veteran and his leadership is obvious to everyone who even casually follows the Senators. It’s hard to envision a guy who could easily be the next captain leaving this summer as a UFA. The Senators blew it badly with Alfredsson, so it would be nice to see Phillips finish his career in Ottawa, even if he eventually winds up as a sixth defenseman by the end of it. Yet there doesn’t seem to be any signs of a big drop-off in play right now. He had a strong season last year, and with the losses of Alfredsson and Sergei Gonchar, he’s one of the last true veteran voices left. On top of that he’s durable, has a knack for scoring big goals and is widely respected. A two or three year deal seems reasonable at this point and I’d be surprised if Phillips was looking to move elsewhere.

Other than the players mentioned here, the Senators are in pretty good shape. Kyle Turris, Chris Neil and Zack Smith are all locked up for 3 years or more. Karlsson’s deal doesn’t run out until 2019 and even though Craig Anderson’s is up in 2015, they have his heir apparent in Robin Lehner ready to go. Not to mention Swedish goalie prospect Marcus Hogberg who seems to have appeared out of nowhere causing a few hardcore prospect nerds to wet their pants in excitement.

Of course, the trail forward can bend a little if the Senators remain committed to being in the bottom third of league spenders. It was that philosophy which led to the messy departure of Alfredsson and could force out other fan favourites in the future.

Going the cheap route tends to put a stink on a franchise that’s hard to shake off, and players like to believe in the myth that their owner can add salary to get them over playoff hump. When that doesn’t happen, it can wear on veteran players and it clearly did on Alfredsson, who also had to deal with playing well below market value for years. Spezza hasn’t had to do that so far, but he’ll be less willing to sacrifice after seeing what happened to #11. Some of the trust and goodwill has been lost along the way.

Bryan Murray has some work to do to repair the damage and keep this team and its fans happy.
Posted by Jeremy Milks at 2:05 PM 3 comments: