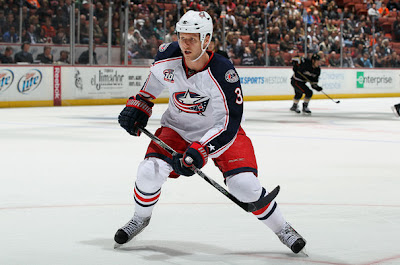 Coming back in much cheaper UFA deals were a couple of injury plagued, hard luck stories in winger Guillaume Latendresse and defenseman Mike Lundin.

The biggest deal of the day for the Senators was the trade of popular but inconsistent winger Nick Foligno for hard-hitting defensive defensman Marc Methot of the Columbus Blue Jackets.

All in all, it was a fairly cheap but exciting day at the shopping mall for Bryan Murray, but did the Ottawa Senators get any better?

No, they didn't. In fact, they got worse. Not terminably worse, but they lost a lot of character and toughness and only brought in one player - Methot - to balance out their losses in that area.

It's not all bad news, and depending on how you view the game, you may think the Senators vastly improved on July 1st just by subtraction alone.

Konopka didn't seem to hurt much because of the glut of young forward the Senators have. He was a rock in the playoffs with his faceoff ability and a willing fighter all season long, but he'll be more missed by reporters looking for a good quote and likely in the dressing room than he will be on the ice.

Filip Kuba was already a goner the second the Senators fell to the Rangers in the first round and the fact that he received 8 million over two years in Florida likely justifies the Senators moving on quickly. Kuba was never a fan favourite but he did have chemistry with Erik Karlsson and was a quiet contributor to the young Swede's Norris Trophy win in June.

Carkner leaving town hurt a little bit. The local boy who made good was strangely low-balled by the Senators with a one-year offer, basically pushing him into the marketplace where he got a surprising 3 yeard deal with the Islanders that had every one-note sarcastic blogger and tweeter in an uproar. I say good for Carkner. He deserves a break after fighting his whole professional career to make it to the big leagues. That deal sets his family up for a long time and gives him a place to play where he'll be properly appreciated.

Other than money, it's hard to think of what turned the Senators off of the popular defenseman. Maybe it was his knee - you'd have to think it was - because it's hard to believe the Murray's would turn their back on a player who they not only raised from the ashes of the AHL but who seemed to be a pivotal personality on the team. It's not a stretch to belive that Carkner would have singned a two-year deal for a paltry 1-1.5 million before he hit the open market. Instead the Islanders, who always have to overpay for free-agents to sign with their team, blew the market for Carkner wide open with a contract that Ottawa would never agree to.

I'm not saying Ottawa should have given Carkner 3 years at that price. But I'm saying Ottawa should have at least offered a reasonable 2 year deal for a defenseman that has always provided value well above his pedigree. Chances are the hometown boy would have jumped at a two-year deal and never looked back. Coulda, shoulda, woulda... it's history now. Losing Carkner won't derail the Senators rebuild. But it doesn't feel right all the same.

But let's look at the good news here, because Bryan Murray just didn't doze through the first day of free-agency.

The Good: Trading Foligno to Columbus for Marc Methot.

Doing a little research on the 27 year old defenseman, most people seem to agree Methot was an underrated player on a very bad team. He doesn't score goals or play the power-play like the departed Kuba, but he's dependable, large at 6'3" 227 pounds, and is known for a few devastating hip-checks he delivered to guys like Patrick Kane and Kris Versteeg. He's a better skater than Carkner, plus he's a local kid which brings a certain kind of marketing appeal for the suits at the Kanata rink.

Methot will likely be the 4th or 5th defenseman, either playing with Karlsson or on the last defensive pair with someone like Mark Borowiecki or the newly acquired Lundin. The fact that Methot is signed for three more seasons is a nice bonus as well, considering that Foligno needed a new deal.

Having to trade Foligno was a shock to some but if you'd been watching, you could have seen something like this coming a mile away. Foligno never truly found a role on the Senators and despite having good stats this past season, he was still shuffled around from line to line, often ending up on the fourth unit and being a spare part. It just never happened for Foligno and it wasn't surprising to see him part of a package to strengthen their weakened back end. There are just too many forward prospects in the organization and not enough defenseman. Someone had to be dealt and why not a player who clearly needs a fresh start? Foligno fit the bill perfectly and now Latendresse, Mark Stone, Mika Zibanejad or Jakob Silfverberg will get their chance to be a top-six winger.

The So-So: Signing Mike Lundin. He's cheap at 1 year. He's got some size and skating ability, but there doesn't seem to be any pizzaz there either on the ice or off. Team 1200 personality Shawn Simpson described Lundin in a nasty little tweet: "Lundin can give quality minutes. Smart D zone coverage. Ok size. No offense. Works hard, not hard. Zero personality." Whatever. Lundin doesn't need to be a clown juggling bowling pins for him to be an assett to this team. He just needs to be healthy and consistent, something he hasn't really been able to do in his NHL career so far.

Okay, I don't really mean Ugly, but it fit with the theme, you know? Latendresse was called out by the Wild for being lazy and showing up to camp out of shape. He has some major injury issues, including a recent concussion. Right away the caution flags go up. But Murray didn't give away the farm for the troubled winger. The Wild chose not to give Latendresse a qualifying offer and Murray scooped him up for a one year, 1.2 million deal that's a big drop from his salary as a member of the Wild.

It's a risk that could pay off if Latendresse can recapture that magic he had as a rookie with the Habs and during his first spate of games in Minnesota where he was rifling pucks into the net every other night. He also needs to show up at camp like a brick shithouse to quiet any doubts about his fitness level. I'm guessing he does that seeing that this could be his last chance before finding himself a journeyman.

It was a long day for the Senators but not necessarily a great one. I really like the Methot deal and will watch like the rest of you how Latendresse and Lundin turn out.

One thing for sure is that Ottawa may be a little less fun to watch in the meantime. Guys like Carkner and Konopka provided a certain kind of entertainment and personality that made last year's team so likeable, even to outsiders. When Carkner pummelled Brian Boyle of the Rangers in retaliation for Karlsson getting his head caved in, the entire Senators team seemed to come together and would have won that series had it not been for a few unlucky bounces in Game 7.

Life goes on and that's the business of hockey. But those kinds of players give the fans and the team something that the stats could never really explain. The so called "intangibles" that moneyball stat-nerds can't seem to comprehend for the life of them.
Posted by Jeremy Milks at 10:51 AM 10 comments: