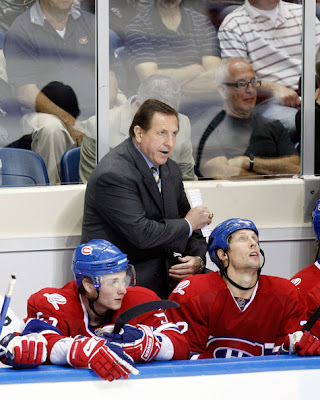 First off, I think Montreal GM Pierre Gauthier would be plain crazy to pin any of the blame on Jacques Martin and his coaching staff for failing to get out of the first round of the playoffs against the superior Boston Bruins.

Despite being decimated by injuries, Martin had the Habs playing responsible, and almost (dare we say it) exciting hockey at times and were one goal away from being in the second round. And from there, who knows what could have happened.

But if you look at the Montreal situation from the Ottawa Senators point of view, wouldn't it be a great opportunity for the Senators if Martin somehow became available?

Sure, it's the longest of long shots, but could there be a more perfect coach for these Senators at this time in their development than the guy who made this organization respectable in the first place? Martin obviously has a lot of baggage with the Senators, but it's important to remember that he was removed as coach because he was no longer the right mentor to bring that particular group of players over the top. But the Senators are once again stocked with young talented kids just waiting for someone to come along and teach them the NHL game. That plays right into the strengths of a coach like Martin.

If not Martin, then the Senators need a bench boss with a similar pedigree. In short, they need an experienced coach, which in turn will bring the stability behind the bench this team so desperately needs.

In a way, the Senators need their own version of Craig Anderson behind the bench. Now I'm not comparing Cory Clouston to Brian Elliott, but look at what happened when a veteran goalie came in to town and simply provided stable, NHL calibre netminding. The entire team calmed down and started playing games to win instead of trying not to embarrass themselves. They grew confident knowing they were going to get the majority of saves and probably a few big ones at important times.

Look at the Tampa Bay Lightning and their acquisition of veteran Dwayne Roloson. Nobody would ever accuse Roloson of being elite, but he brings experience and that goes a long way.

The Senators don't need a coach with multiple Stanley Cup rings (though that would be nice). But they do need a "name" coach who has guided two or three teams and had some success with modern NHL players. They need someone who brings instant credibility, much like Craig Anderson brought to the crease.

I can throw out multiple names here but I would just be guessing. No one but Bryan Murray knows who is going to get hired eventually.

But if Martin somehow found himself on the sidelines this summer, Murray would be equally as crazy as Gauthier if he didn't hire him immediately.

Just saying.
Posted by Jeremy Milks at 8:40 AM

Hiring a proven loser with a history of NOT helping develop young talent. I can't imagine a much worse fit. Other then julien.

Is that you Brian?

BTW the tv deal is not a good one. And it's worth less per year than the new canadian deal will be.

6 teams pull in almost half the leagues revenue, and over half the TV revenue. 3 other Canadian markets are begging for a team. And yet, still 6 teams.

Yep, he's quite the commisioner all right. Long live buttman!

Really? Martin? Can't we come up with someone better? Maybe we can get lalime as a backup too. Then resign that dinosaur Murray. D'oh!

I don't think getting a name coach matters, personally. Just a good one who can help put a more entertaining team on the ice.

"In a way, the Senators need their own version of Craig Anderson behind the bench."

We need a guy that coached well for 15-20 games when there was no pressure and nothing on the line? What's Scott Gordon doing these days?

As for Martin, no thanks. We already have lifetime underachiever Murray with a lifetime contract, let's not go to the loser's well again with Martin.

Get someone without ties to the players or organization and with a winning pedigree and ability to coach kids. Preferably someone that has won a Cup, since that person will be able to handle the following situation:


BM, small flecks of drool on his chin: "Coach, the team isn't performing and I have to fire you."

Coach: "Hey Bryan, talk to the ring. Maybe if you gave me a centre that wasn't a temepermental man-child, some talented forwards and a defense that defended...the coaching would work out."

Murray: "I have 40 yearsh exshperience in the NHL. The media and soshial media love me."

Coach: "But what have you won?"

"We've fired our coach. I know he was the right guy at the time but he isn't the right guy at this moment for these players. My brother Terry is going to finish the year here. He's a good guy, he's a character guy. He's a guy that cares. He's a good, character guy. He has a lot of character. He has a lot of experience too. Oh, my daugthers are being given scouting and player development positions and Tim's son is being promoted to head of European Scouting."

Mmmmhmmm wake me when Murray has success or hires someone with a proven track record...

I understand your point but I don't think it would be wise from a marketing perspective. It would seem to be a real problem with those that see the world from a glass half-empty slant.