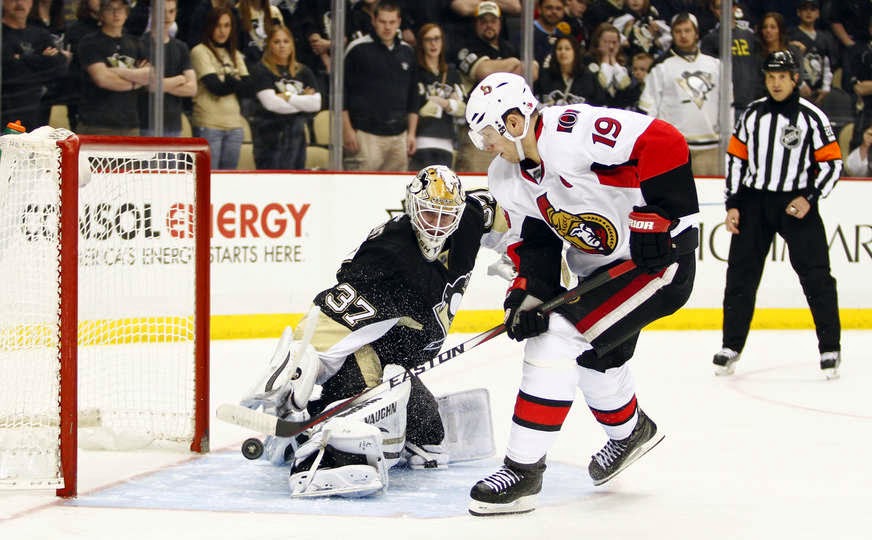 Winter has struck me one last cruel blow with a head cold that’s burrowed into every last crevice of my large skull, so while I’m at home catching reports on exit interviews by the Senators, I thought I’d try to offer at least a few coherent sentences.

I’ll be updating this post as the day goes on, heavy-head allowing...

Craig Anderson – So far, he’s sounded like the most disappointed Senator, although Jason Spezza was close. He mentioned that players were too often looking for others to step up and make a difference instead of doing it themselves. Sounds about right, especially when you look at how this team performed last year when Spezza, Karlsson and many others were out. Anderson also told reporters he “100%” wanted to stay in Ottawa and later on had lots of praise for rookie defenseman Cody Ceci.

In that same interview he also made a smart distinction between number of shots against compared to bonafide scoring chances against. With the rise in the mainstream of stats like Corsi and Fenwick as barometers of team play, Anderson made it clear that it’s not necessarily the amount that bothers him as a goalie... it’s the quality. Teams keep internal stats on “scoring chances” and that may be why they’ve been notoriously resistant to more general possession stats like Corsi. When it comes to these things, I’m not loyal to either side but I’m more apt to take a goalie’s word on it than anyone else’s.

Jason Spezza – Unsurprisingly, he sounded incredibly depressed about the situation, but he’s sounded like that for at least a few weeks. When teammates were spouting positives about the team coming together to finish strong, Spezza was saying stuff like “too little, too late”. Clearly, he’s taking his first season as captain hard... and he should. A lot of the organization’s hopes rest on his sometimes unstable back but he wasn’t able to deliver this team to the playoffs like his predecessor had for many seasons. Team’s have bad years, and I don’t think you can pin much of the blame on Spezza, but as captain he’s doing the right thing by being accountable, at least to the media. Yet when asked if he wanted to return, his tone of voice took on an even darker tone and he simply retorted “I do”. It was a short answer, and didn’t do much to convince me or anyone else that he’s a happy guy right now.

To me, trading Spezza won’t do this team much good in the short or the long term. Extracting that much skill out of your lineup is never a good thing. Even if they get a first-rounder back in the trade, that player won’t be on this team and contributing regularly for 3 or 4 years. They’re not going to get back a first-line centre either. Spezza is a 220 pound point-scoring machine who’s just 30 years old. The only reason you would part with a guy like that is if he wanted out himself. I’m not sure he’s at that point yet, but it could be close. Nobody gets treated worse by the fans than #19. Alfredsson went through some tough times here with the fans and perservered. I think Spezza can do the same but this is a delicate summer for both sides. Spezza may want some assurances that GM Bryan Murray is going to either re-sign Alex Hemsky or get someone similar to play with. If I had to put money on it, I think Spezza survives here and gets another contract.

Paul MacLean – When asked, both Kyle Turris and Erik Karlsson had lots of praise for the suddenly beleaguered head coach. As Ian Mendes tweeted out, Karlsson said “Guys have a lot of respect for him and we like him.” Turris maintained MacLean’s message is still getting through to the guys in the room and you can only think that a lot of the players said this to Murray in their exit meeting when asked.

When Barry Trotz was let go this morning by Nashville, it decreased the job security of at least 10 coaches around the league, including, arguably, Paul MacLean’s. The one thing everybody has been harping on has been this team’s lack of defensive prowess, which is what Trotz instilled annually in Nashville as coach. Even Jacques Martin was quoted in the Ottawa Citizen yesterday saying that he’s looking for a head coaching job.

But come on... MacLean can’t really be in trouble here can he? One tough season after signing a contract extension shouldn’t be enough to make this guy homeless. Saying that, some major adjustments need to be made by this coaching staff going into next September. It might mean Murray makes a change with the assistant staff and brings in a defensive specialist (like Pittsburgh did by bringing in Martin, a move that worked incredibly well with key defensemen missing there), or it could just be a different approach from the existing group. I’m not sure the defense roster is going to change that much, particularly in the top four, so any changes will have to be through coaching.

This is just speculation but I’m guessing Murray and Melnyk were a little unhappy that MacLean didn’t have more patience with the Bobby Ryan and Spezza pairing. They spent a lot of money and prospects to bring Ryan in to play with #19 but instead spent most of the season looking at a hole on Spezza’s right side that not only hindered the offensive potential of their number one-centre, but also the team. Eventually they had to go out and get Ales Hemsky and now they have two expensive right-wingers to re-sign, Hemsky this summer.

Sure, the Spezza/Ryan pairing didn’t seem to click in the early going but Spezza himself admitted he wasn’t fully himself in October after back-surgery. There’s always going to be that “what if” feeling around those two, especially if an unhappy Spezza wants out this summer. MacLean exhibited a bit of stubbornness this season, and that might have hurt the team. His unending patience with Jared Cowen is another example, but if you look at it closely, keeping Cowen in the lineup to try and play through his struggles is in the best interests of the team long-term. They committed to Cowen in his new contract and MacLean didn’t take him off the ice, even when he was clearly hurting their chances. That’s the dilemma for coaches of young teams. You have to balance winning at all costs with development. MacLean was caught in that trap with Cowen and a few other players.

I could be dead wrong but I think MacLean is safe for now. If the team falters next season in the same way, it could turn into the “night of long knives”.

Erik Karlsson – With a hoarse, exhausted voice, Karlsson beamed positivity throughout his media availability today. I don’t know what it is, but even in the midst of disaster, this guy just comes across as incredibly likeable and easy-going. He always has the hint of a smile on his face, even when he’s tearing into a ref (which he did a bit too much of this season). There’s no need to go into his play on the ice – he’s the franchise. But what fascinates me lately is his ways off the ice. He’s a magnetic personality and never seems to carry around the gloom on his shoulders like some can when things are going south. Sure, there was that self-imposed exile from the media earlier in the season which was bizarre, but his explanations for it were disarming. He’s noticeably honest, like a lot of Swedish hockey players (ie. “probably not”) but you always walk away thinking “things aren’t that bad” after hearing him talk. Makes you think he has the personality to be the next captain of this hockey team when Spezza moves on, even if it means this summer.

Now, it’s easy to be like that when you’re never taking the brunt of fan criticism like Spezza has over his career, and thus has no reason to be guarded. Yet I think Karlsson just has that innate personality to block those things out more than Spezza does. We’ve heard a lot about how Spezza is a keen student of the game and keeps up with what the media is saying about him. That’s got to do some serious mental damage over time, and undoubtedly it has. Spezza sounds utterly defeated at the end of most seasons but manages to get his spirits back up by September. Karlsson seems like the kind of guy who wouldn't pay much attention to what the media is saying. Maybe I’m wrong, but his personality is just too fast and loose to get caught up in that.

If he can get a full summer of training and heal that Achilles injury, it’s frightening to think what this guy can do next year. And if that captain’s “C” happens to become available, I don’t think he’d hesitate for a second accepting it.


More to come throughout the day.... Feel free to respond on Twitter.
Posted by Jeremy Milks at 12:27 PM

I'm wondering if Karlsson's divorce prevented him from getting the C this year.

Next media availability, Bryan Murray will tear off the mask and show us that he is really Mike Milbury.

"If I had to put money on it, I think Spezza survives here and gets another contract. "
Sadly, the Senators did not see it this way. Another core star player gone.

Any chance we can get some thoughts on this Jeremy?
Greg.