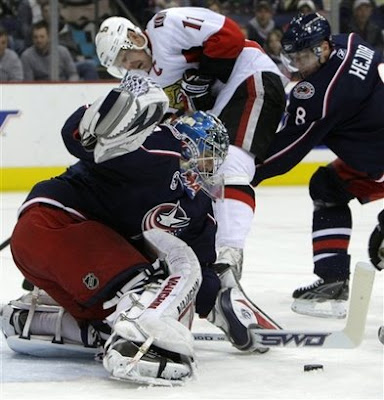 Last night's loss to the Blue Jackets was perhaps the most boring hockey game I've seen all year. Or possibly since the lockout.

It was one of those games that intermittently sours me on Craig Hartsburg. I've both liked and disliked him at various points this year but I'm starting to tilt one way over the other.

I'm not one of those guys who blames every loss on poor player effort. I believe that it's built into an NHL player's DNA to compete. That's what got them to the NHL in the first place.

But it's up to a coach to harness those players and build a system that will allow his team to succeed and I'm not convinced that Hartsburg's style is really bringing out the best in this group.
This team can't score, yet it was the second highest scoring team in the NHL last season. Losing Wade Redden and Andrej Meszaros probably has a lot to do with it but the Big 3 should still have more points than they do and that, to me, reflects more on coaching than it does on players "effort".

Something is not right here. Hartsburg is looking desperate and illogical by first scratching Jason Smith, one of the guys who plays the shutdown system the most effectively and then sitting Dean McAmmond last night in what can only be seen as a coach just trying to embarrass a veteran player.

The speedy McAmmond was taken out for Christoph Schubert of all people. It's a bush league move on the part of Hartsburg and I am starting to suspect that he will never win over this room.

That will come as a shock to a lot of fans who think the role of a coach should only be that of a perpetually angry punisher who's sole purpose is to question the manhood of all those rich and spoiled hockey players. Who cares if that style was last seen in the 1980's?

I don't feel that I've been overly critical of Hartsburg this year and I do think that this team needs a coach that makes players more "accountable". I'm all for that.

But what Hartsburg seems to be doing is forcing a defensive system that this team is not really built for. The best chance for the Senators to have success right now is to open up the offense and just pray that Brian Elliott and Alex Auld can hold the fort.

Instead we get another low scoring snoozefest and a coach who has hit rock bottom by trying to embarrass his veteran leadership group.

If this keeps up, Hartsburg will be gone and he'll have to take at least some of the blame even though the fans and the media will predictably make him out to be a martyr.

"Requiem for an old defenceman!"
You are in your 36th year, 16th as a pro. (used to be 6'3" now six one and a half. the posture 's gone.) It's not the milage, it's the playing minutes and the injuries (multiple). Reaction time, heck, balance becomes an issue. Speed forget it (slow to slower). Pass hah, (hands are gone!) don't overhandle the puck, just get rid of it quick! Pass off... The ring around...
Being on the ice for 10 of the last 12 "first goals" of the game for a 5-6 type defencemen is tough to do! Especially playing these kinds of minutes playing in these types of situations.
Having the "D" and "Head Coach" blame the other guy (my defence mate) time after time to shield me and my General Manager is gratifying but must be a bit trying after all these games. Thank goodness the old guys that count give aways don't include me in their statistics. It's called the "Vets Pass"! We're kind of lucky the writers don't have to watch the game anymore or record their own observations.
The better teams (pretty well everyone but us) are tough on 5-6 defence pairings, we end up playing big minutes verses very good offencive lines. OK! So stay close to the goalie (too close) forget the offence (the break out) just get rid of the puck, preferably to one of our own young defencemen so he can deal with "our" problems.
One last thing, laying prone, completely flat on the ice at your goaltenders feet, is not a great defencive play, it is the last desperate act of a totally beaten (over matched) defenceman. So let the kids play! Even showcase Schub on D (it might enhance his value) do something constructive for once.

Cakuctit, you're a complete moron.

Anonymous 12:41 PM No! Just sick of the bull shit. The incompetence.
The old boys club sticking together at the expence of some great young kid who cannot defend himself supported by a PR guy who will say anything to cloud the facts and perpetuate the myth.
I'm sick of a coquettish press who could not tell the "Truth" to power or the Ottawa fans (it's readers!)
Martin Gerber is the worst little goalie in the League and has been this way for two seasons.
Jason Smith is done.
This is not the right time for Brian Elliott to be with the Big Club (No gain here it will get worse for all involved).
We punish kids for becoming too valuable (as in Andrej Meszaros).
Antoine Vermette and Chris Kelly are getting "worse" even there penalty killing is deteriorating (not statistically but positionally, they are getting sloppy - lazy!).
PMD!! I blame the GM; the coaches; the scouts; the media; the fans and myself (and I was one of the early ones to chirp but too late). This was classic group think stupidity.
We are too slow and we bet on the wrong horses.
And you... you little anonymous nothing, are a dream merchant. Who doesn't know the difference between the hype and the truth.

It is time to accept that the season is over, and instead focus on 2 things;
1. Letting the players play. It is insane to ask Heatley, Spezza and Alfie to play like 3rd line defensive forwards. These are race horses being asked to plow the fields.
2. Develop our prospects. Don't ask Zubov to play on the 4th line, or Foligno/Winchester to be a second line scorer. Give each player a key list of demands, and then place them in situations that allow them to reach these goals. The era of "working your way up" is over. Rookies become top six forwards, and top 4 D over night. I do not believe either Hartsburg or Murray have accepted this reality of the salary cap era, or how else do you explain signing Smith to over 2m dollars?
I say loosen the reigns on the offense, as it's obvious trying to play 2-2-1 isn't working.
Zubov - Spezza - Alfie
Heatley - Vermette - Shannon
Foligno - Kelly - Fisher
Z. Smith - Regin - Winchester
This team is in need of RW's, so let's see what Fisher and Shannon can do playing that position in the NHL.
Donovan can back fill for injuries, he's not the future, so why behave like he is. Mac, Schubert, trade then now for picks or prospects.

Anon @ 2:20 - Zubov plays on the fourth line because he's a fourth line player. I can't for life of me understand where people get the idea that he is a skill player. He's an energy guy with limited offensive skill (much like most of this team). Milks I see where you're comming from when you criticize Hartsburg's system but let's not forget the the most basic reason this team doesnt score goals - its just plain bad.

It's invigorating just to think this way.
(A) After ten games, Regin gets Alf for ten games.
(B) Alex Auld gets all the games except the "Gimmies" Brian Elliott is treated like the No. 1 goalie that he is working into becoming.
(C) Play the wingers high on the point men and burn the bastards when they pinch.
(D) Every line plays "Fire Wagon Hockey" let us see what we got.
(E) Brian Murray should be made go and stand behind the bench. Hunt & Hartsburg to walk the plank.
(F) An old stat reconstituted and kept religiously, Forward Pass "completions" by each D-man and in each zone of the ice.
"To Andrew" Zubov is a highly skilled pure bred palimino type offencive player. For you not to be able to recognize that does not reflect on you kindly! You should be sent with the rest of the GTA Scouts for retesting in '09.