Senators Miss For First Time Since 96 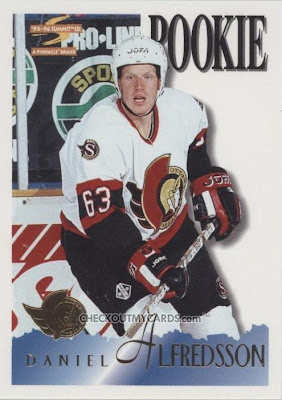 With the uninspired loss tonight against the playoff hungry Panthers, the Senators are now officially eliminated from the post-season for the first time since 1996.

Just to bring you back to that era:

Jean Chretien was the Prime Minister Of Canada.

Patrick Roy had just been traded to Colorado.

Steve Yzerman's leadership abilities were being called into question.

Tiger Woods was just about to turn professional.

Wayne Gretzky was a St.Louis Blue.

Daniel Alfredsson was a rookie.

Wade Redden had yet to play a game for Ottawa.

Nick Foligno was 8 years old when the Stanley Cup was won by the Colorado Avalanche. His dad, Mike, had only been retired for two years.

Here's a prediction: If Ottawa fans didn't like Andrej Meszaros, they aren't going to like Chris Campoli. Their games are pretty similar but Campoli doesn't have the physical element that Meszaros brought to the table. Good luck, Chris, but the Ottawa faithful are going to eat you alive a year or two from now.....

Shaun Van Allen is a man of few words, an interesting characteristic for a TV color man, which Vanner has been doing off and on for Sportsnet during the Senators games with Dean Brown. But in a way, it's kind of refreshing, even if it takes Brown off his guard occasionally. There was a moment before the opening faceoff when Brown cued up Vanner but the ex-Senator took about 5 seconds to sum up what he wanted to say and the dead air clearly caught Brown by surprise. Some guys would take that opportunity to go on and on about the useless "Keys Of The Game" but Vanner is more like Hemingway - direct and blunt......

I know that Chris Kelly has been wearing 22 for a long time now, but I can't help but think of Van Allen whenever I see that number on a Senators jersey. I'm getting old I guess....

For the record, in my previous post I mentioned that the emergence of Nick Foligno and Ryan Shannon might convince Bryan Murray that he should be spending whatever money he has on his blueline, and I mentioned Jay Bouwmeester as a possibility.

I actually don't think that's a likely scenario but it won't just be a money issue. If Bouwmeester wants to sign with Ottawa, Murray will have no second thoughts about moving money around to accomodate him.

Players like Bouwmeester are rare and Murray would probably have no trouble parting with any combination of Chris Campoli, Mike Comrie, Chris Kelly, Alex Picard, Alex Auld or Jason Smith to make room.

That being said, I don't see Ottawa having a better chance than anyone else of signing Jay other than Florida......

The last time Ottawa switched coaches in mid-season (with someone who wasn't the GM at the time) was during the 95-96 season when Jacques Martin took over for Dave Allison (who took over for Rick Bowness just a month or two earlier).

Just like Cory Clouston, Martin instituted a whole new system and the team began to turn things around. It didn't get them into the playoffs in 96 but they made it the next year. Is history about to repeat itself next season?.........If there's a broken stick during play, Jarkko Ruutu is the guy you want to have on the ice. During a 5 minute span late in the second period, Anton Volchenkov broke his stick and Ruutu didn't hesitate for a second in handing over his lumber (both are left-handed shots). Then a few plays later, Ruutu broke his own stick but dove headfirst into the slot to take away a great scoring chance from a Florida forward. It's been a disappointing year for a lot of Senators but I think Ruutu has been great all season long......

Chris Neil passed Alexei Yashin on the all-time Senators games played list with his 505th contest tonight........Dude, I paid $384 dollars to a dentist today, for what amounted to 45 minutes of plain old cleaning. Is it me, or is the dental industry completely out of control? Someday soon, dentists will start buying NHL teams (see how I linked a petty personal complaint to hockey to make it perfectly relevant on a hockey blog....).......$384 dollars? Total madness I tell you. But that's still not as crazy as the premier episode of the Osbournes Reloaded that I casually witnessed tonight. Ozzy is now the host of a variety show in front of a live studio audience. I will call it now - this will go down as the worst show in the history of broadcast television - next to the NHL Awards of course (see kids, I tie it all in....)

A big salute goes out to Brian Kilrea, whose coaching career came to a stunning end tonight when the Ottawa 67's lost to the Niagara Ice Dogs in overtime of Game 7.

If I was brave enough, I'd post an Anne Murray song for you.

Good post. I agree with you in that Campoli has a solid shot at being next year's whipping boy. I can see Kulka foaming at the mouth already.

I don't mean to throw him under the bus completely. I think that he can be an effective player, but he needs to be insulated properly. He cannot be expected to be more than he is. That might mean 14 minutes a night in a number 5 or 6 role.

Unfortunately, I think that if Murray is around, they will push him to play above his head in order to justify trading away the first round pick.

No parallels with 1996 until the GM gets canned. The 1996 turnaround included a new GM and coach.

I think that the air needs cleaning. That won't happen until you have a new voice and philosophy from the top. Murray needs to be held accountable for the team's failure. High standards start at the top and then trickle down.

My bet is that JBo ends up in Calgary, Edmonton or Vancouver. I read somewhere that he wants to be in Western Canada. I bet every other team will be used to bid up the price.

The Senators are not yet mathematically eliminated. They could still make the playoffs with a 6-0 finish if the Canadiens go 0-6, the Panthers 0-4-1 or worse, and the Sabres 2-3-2 to make a three-way tie at 88 points and 39 wins. (The Senators would have the best points percentage in games among the tied teams.)

This "faint hope clause" is likely to be used up on Thursday, when the Canadiens play the Islanders and the Sens play the Bruins.

Why do people think Murray is such a bad GM anyway?

The way I see it, Murray is like Obama and was handed a mess to clean up. He has done the best he could do with what he was givin. He signed everyone that needed to be signed, let go of a defenceman who was overpaid(with the old riegm) and is proving that in NY still today, brought in leadership and toughness in the offseason(both were lacking) and argubaly has drafted very well. All of this in less than 2 years! LESS THAN 2 YEARS! The only knock on him is the amount of coaches he has burned through in that time, but how many other teams have changed their coach in that span? Half of them almost!

How many years did we put up with Mucklers antics only because of his pedigree? He was the one that was handed a loaded gun and couldn't pull the trigger! And he left this team a step away from being in shambles. He picked the wrong defenceman(Redden), he drafted like crap(Lee...only because you need to see who was taken after him, Klepis, Kagi"writeoff", Ni"notsocool"in) he couldn't make a trade to save his life(Bondra, Arnason, De Vries, etc....exceptions in Heatley & Comrie), signed like crap(Gerber) and Murray gets the blame on it.

Everyone lays blame on this guy like he has been the GM for years and years. Wake up people!

(Sorry for spelling errors, i have been drinking a few)

Speaking of 1996, stayclassy.net did an interesting comparison between Tiger Woods and Daniel Alfredsson.

I'm sorry, Murray is no Obama. He is more like Bush. Living in the past and out of touch.

No, he/she is comparing the mess that was handed to Obama is like the same mess Murray was handed when he was hired as GM.
Wow! way to not pick that up.

Why do you think the Ilanders didn't want Campoli? He's not that good.

Hey Jeremy - why don't you try brushing your teeth periodically, you'd be surprised how quickly the dental bills come down... :-)

You really like Vanner on TV? He's getting better, but he doesn't come across well like Galley does. Perhaps in time. He's been doing a lot of OHL games on Sportsnet, too. He has good insight, but sometimes he comes off as creepy.

I actually like Campoli alot. For the record, I never had an issue with Meszaros, but will say he always had pretty solid D partners (Redden and Chara).

I agree with Foligno/Shannon. Shannon has to be a lock for a one-way deal next year. He makes Ottawa's secondary lines so much more dynamic. Good on the point for PP too. I'm a big Shannon fan.

I'm going to post links of your blog on mine! Nice Sens coverage.

"Killer" and I spent the afternoon at his bar on Rideau Street the day before he took the 67's job, he was all hockey all the time. Just a great guy to talk to match you story for story.

My sister was telling me the other day how eligible and handsome he was a young Detroit prospect!

Inheriting a mess? What mess? They were coming off an appearance in the Stanley Cup Finals and most hockey people had them pegged as contenders again.

Murray screwed it up.

How did Murray screw it up again? By signing all of the core guys that were left unsigned to him? By shipping McGrattan and his "problems" to phoniex or shipping Emery to Siberia?(both were left to him by Mucks) Letting Redden leave with his ridiculous contract?(left by Mucks) By moving up in the draft to take highly coveted Karlsson? By adding depth to the organization?(Shannon, Winchester...)

Serious though, the East is a poop shoot. Other than Jersey's dominace of the last 10 or so years, anybody in the east can get to the final. It's been that way forever. Who cares, the west is were it is at!

I think some of you are missing the big picture here. The team we had 4 months ago was not Murray's team, it was Muckler's team. Until Murray rebuilds/retools this team in a year or two it wont be his team. when that happens then we can talk about whether he deserves an extension.

Thats what my original comment is all about. Thats why I can't understand why people want Murrays head on a platter for ruining this team? So far he has done a great job, except for hiring a head coach(which does seem to be solved now).

Kilrea is a drunk