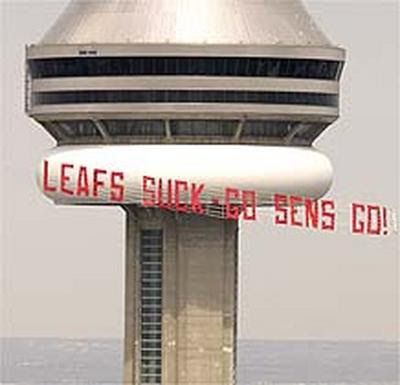 It wasn't a heated playoff game in April between the two provincial rivals - in fact you couldn't get more removed than a rookie game - but it must have been satisfying all the same for Senators fans to see their temporary squad roll over the outclassed Leafs 7-1 in Kitchener tonight.

And while many of the big names performed really well - goalie Robin Lehner being the best example - some other lesser known players finished off the tournament with an exclamation point.

As I noted after the first rookie game against Pittsburgh, Erik Condra really caught my eye, but tonight he grabbed everyone's attention with his inspired, gritty play and his "Gordie Howe Plus" hat-trick - 2 goals, 1 assist and a fight. It's hard to say if Condra will be able to put up a lot of points at the pro level but he will definitely be a leader and an agitator. Because of his age and enthusiasm, Condra should be a really good AHL player this season for Bingo, perhaps filling a role vacated by Zack Smith, should he make the big squad.

Another player who had a great game was camp try-out Brandon Svendsen, who last played for the Idaho Steelheads of the ECHL after finishing a four year run at Bowling Green University where he was an assistant captain. Svendsen (who was born in Minnesota, not Sweden) can really skate and drove to the net all night despite being one of the smaller players in camp. He may get some consideration for Bingo and comes with a reputation as a good penalty-killer from his time in college.

Mike Hoffman really impressed again and makes you wonder how he slipped to the Senators in the 5th round, especially after scoring 52 goals last year in the Quebec league. His determined drive to the net during a play in the 2nd period forced the Leafs to take a penalty and the Senators exploded for 5 goals soon after that. If Senators fans are still upset that Antoine Vermette was traded, don't worry. Hoffman will be his replacement in 2 or 3 years. If you really want to wish for the moon, Hoffman could even end up a player like Simon Gagne or Mike Cammalleri. That's pushing it, but it's not out of the question. He'd have to get a lot stronger but his skills and skating are not in question.

I didn't talk about Kyle Wharton after the Pittsburgh game, but that might be because he's hard to notice. And that's a good thing. He seems really solid in a Chris Phillips kind of way and he even got tossed when he delivered a crushing elbow to John Kurtz. On the play, Wharton had just gotten rid of the puck in his own zone when Kurtz came steamrolling in from the point long after the puck was gone - at least 2 steamboats. Wharton pushed back but his elbow caught Kurtz right on the button and the Leaf went down with his face hitting the ice flush and bouncing off in a sickening fashion. Kurtz skated off on his own but the cameras showed him trying to turn into the wrong room before a trainer pushed him in the right direction. He was in Disneyland for a while there.

Other Senators who had good games were Shea Guthrie (an Almonte, Ontario native and former Islander draft pick who is here on a try-out), Erik Karlsson (no surprise), Craig Schira and, of course, goalie Robin Lehner.

He was even better tonight against the Leafs than he was against the Penguins last Monday. In two games he's let in one goal and made excellent stops all the way. He is inevitably going to end up in the Soo in the OHL this year, and be a bright spot on a bad team. But he should be in the main training camp where he'll get a chance to turn some more heads.

With Jared Cowan, Lehner and Hoffman, the 2009 draft may go down in history as one of the Senators best. And that's not including 2nd round pick Jakob Silfverberg who is also highly touted but still in Europe.

On the Leafs side, you have to appreciate the game 7th overall pick Nazem Kadri played tonight. He seemed like the only Leaf who was embarrassed and started throwing his body around even though he's not known as a physical player. If anything, Kadri woke the Senators back up after a sluggish start to the 3rd period, but it's easy to see why the Senators coveted the London Knight at the draft - and why Brian Burke made sure to get him before Ottawa got the chance.
Posted by Jeremy Milks at 9:13 PM

KADRI will look like a bug on Cowen's visor when he starts playin' for real with the "Big" guys...we got the better man in that draft by a margin of two to one!

I think you are a closet "Burke" fan which is "OK" but he got blind sided by his own scouting staff on his first pick ever as the Leafs GM.

I agree with Canucnik, Cowen's gold. Everyone's excited about Karlsson, and I think he'll be an outstanding pro, but Cowen's the crown jewel of our prospects.

Frankly, and this will earn me some scorn, I liked Cowen better than either of the big swedes that went ahead of him, in large part because I saw him much more.

Kadri could turn out to be a game changer, but he could be a bust, too. I didn't see enough consistency in his junior game, though he obviously brings a high skill level. Cowen is simply "can't miss" IMO.

Hah, Kadri is going to own the senators for years to come. Cowan the better pick by 2-1? Yea right, thats why Murray wanted Kadri, not Cowan right?

Go get the pilons for our game of half of half court...that's if you can remember where you left them after the rookie game!

didn't see much of the game, but loved Zach Smith's skating & passing, as well as Lehner's play. This looks to be a good year for the draft, very promising.

Murray wanted Kadri because he already has Karlsson and Wiercioche in the system, but forward prospect depth is weak (I'm being generous).

Good news is, we'll get to see them go head-to-head for years to come...and I'm willing to bet Cowen turns out to be the better pro.

Hoffman slipped that far because this wasn't the first draft he was eligible for. Therefore, because he's older and has had more time to mature, he's seen as someone who is closer to their potential rather than someone still far away from it. Or so is my interpretation.

Regarding Hoffman, I've read that he was considered by some to have an 'attitude problem' and thus carried an extra risk of not developing into a professional player. Can't say I put much stock into that, Dany Heatley seems to have made it pretty far.