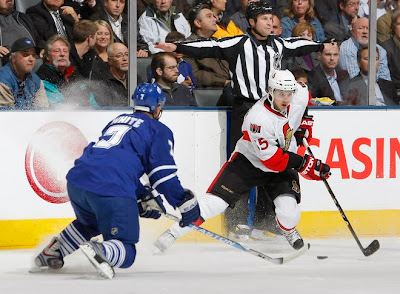 Ok. Back up with a temporary computer. Crisis averted.

Before the Tampa game, I just wanted to quickly address the latest scuttlebut going around concerning Erik Karlsson and (as some believe/wish) his suddenly eminent demotion to the AHL.

First off, Bryan Murray denied it and stood behind his rookie by saying that 10 games is not going to tell the story on Karlsson's year.

That's the right move as far as I'm concerned.

One, he's standing behind a player and defending him publicly, something that Murray rarely does (he's old school even though he was once considered too "new school" in the 80's).

Secondly, 5 games is not a fair slice to start dumping on the kid. He looks like a 19 year old rookie and is having some trouble getting used to the speed of the regular season, yes.

But you can tell that this guy is good enough to play in the NHL once he gets his head around it. After a couple of decent games, people are jumping on the Alex Picard bandwagon and clamouring for the call-up of Brian Lee.

Not going to happen (barring injuries, of course)

Murray has been around way too long to succumb to knee jerk reactions after only 5 games. When you believe in a player and decide to give him a chance, you give him a real good shot at it. If Karlsson is still struggling at 20 games, maybe then you have this discussion.

The upsides for Brian Lee and Alex Picard are not as big as Karlsson's right now, not even for this season.

Murray is not keeping Karlsson up just because he is his prized draft pick. He can see the obvious game breaking talent right there at the surface that is going to shine through once he gets more confident.

People didn't seem to be too worried about Karlsson when the Senators won 3 games in a row. Now, after losing one game to the Stanley Cup champions, they seem to want to make a change.

All players make mistakes, especially rookies. You have to live with a few even if the easiest thing to do would be to throw in the towel.

Karlsson will be better.

Bryan better sharpen up...Farolero of Ostrava (#17) is done, he is comin' back even lighter...Mr. Murray doesn't want to spend the money but he has to make a move.


We are so close I hope we don't blow it again by not giving enough attention to the DEFENCE.

Remember our Defence is incomplete...and Saint-Pascal knows it...if you lose him you are gone!

I don't think it's about dumping on Karlsson. I love everything about the guy. It was a good pick by Murray.

That said, I don't see the logic in burning a contract year. The Sens will not be contending this year, so they should take a long-term approach.

I would not want to see Karlsson sent to the AHL, but rather Sweden. The guy had confidence and swagger. The best thing for the guy is to put him in a situation where he won't lose that mental edge.

If we had our old defense of 2005-06 (Redden, Chara, Phillips, Volchenkov) then I'd say keep him. A strong defense would insulate him and he would flourish. That's why Mez looked so good back then.

But, now our defense has too many guys trying to prove they are NHL'ers. Campoli, Carkner, and Picard are working to establish themselves. Even Kuba is not a guy to learn from as he has only been to the playoffs twice even though he was drafted in 1995.

Karlsson's mental edge has to be protected. I say let him develop in Sweden. Rush him and we risk hurting his development. Sundin, Forsberg, Selanne all took two years or more before they came over. Even Alfie came over at 22.

And definitely do not sell it as a demotion. It is not a demotion. The fact that he's getting a taste at such a young age is an indication that he could be a stud and that he is important to the club. A move back to Sweden says that we value him enough to be patient with his development.

I think that we have realistic here. He's a 170lbs defenseman and the team is counting on him to have an impact this year. Add to that, he's 19 years old and getting acclimated to a smaller ice surface. Add to that, he's part of an inexperienced defense corps in hockey mad Canada, on a team that just missed the playoffs and is under pressure to make the playoffs this year.

He's been sold to the public as a saviour, I don't think that's fair to him. If we let him develop at his own pace, I'm sure he'll be terrific. I love players like him, I'll be his biggest fan.

Let's not screw him up.

I agree that Karlsson needs to be in Ottawa as much as possible this year, playing against NHL talent.

It is a faster game in the NHL and the only way to acclimatize to the speed is to experience it. He will not get this exposure to the pace of the game anywhere else.

Let Karlsson learn and get better. As long as he is getting minutes, it will help his development and the team.

Can't wait for him to go all Del Zotto on us!

If he does stay up, a steady diet of Works burgers may help the lad ...

I was honestly a little worried about Karlsson even though Ottawa won three straight; his positioning isn't where it needs to be for him to be an effective NHL defender. And as he himself admits, he's not used to playing a game this fast on a small surface. But I recognize that it's still probably best for him to learn on the job in Ottawa. With him in the A, and Kuba back, our defense is totally average, and we will struggle to get the puck out of our zone. Unless Brian Lee suddenly turns into Brian Leetch.

Its thrown outta poportion. Karlsson has a good situation in Ottawa. He lives with Alfredsson, not in a hotel. That means he is getting home cooked meals, not take-out(looking at you Carey Price),he comes and goes to the games with him. He can bounce ideas and questions of him at any time. Being in Sweden is not going to help him any.

Also, he is matched up wrong with Campoli. Once Kuba comes back, he should play with Karlsson. He will be a calming force that will slow the game down for Karlsson and thats when he will start flourish.

Also, one night during the WJC. I had a long conversation with Bob Murray(the GM of Anaheim) and his two head scouts. They were head over heels for Karlsson and were absolutley pissed that Ottawa was able to move up in the draft to take him. They were trying to do the same thing and loved Karlsson because of his smarts and that he oozed confidence. They predict him to be a better Kronwall.