Pens and Sens - The Breakdown... 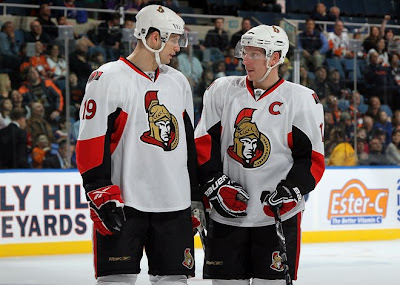 It’s a different atmosphere for Ottawa going into the 2010 playoffs, one of much lesser expectations than in the past decade – or the “glory years” if you’re brave or crazy enough to call them that.

You might argue that no one expected Ottawa to do well going into the recent 2008 post-season after suffering a near historic collapse one year removed from the Stanley Cup finals, but going into that ill-fated first round series against the much younger, less experienced Penguins, you still had the sense that Ottawa just might be able to lift their heads from the mud and at least survive a round or two just on instinct alone.

We all know that series ended in a humiliating sweep at the hands of the Sidney Crosby-led Pens, who went on to lose in the Cup final to Detroit before getting their revenge, and their championship, one season later.

Now Ottawa and Pittsburgh both go into another first round matchup with a lot of hard miles behind them and no guarantee of a return to championship form.

But I’m sticking to my original start-of-season prediction where I picked Pittsburgh to repeat as Stanley Cup champs, and unfortunately for Ottawa, who have shown incredible character through much of the season, I think their exasperating season of dynasty-hinting heights and horrifying lows ends here, same place it ended in 2008. But that doesn’t mean the season will be considered a colossal failure like it was back then. Far from it.

The Penguins, to me, look like a team who basically coasted through the season because they know you need all the blood you can save for the playoffs, and it’s not about how much you spill in December and January. They’ve been to the last two finals and know what kind of stamina and resolve it takes to endure. I’m not saying there was a conscious decision to hold back all year, but you most likely can’t help shrugging off a few games against inferior competition in what amounts to a necessary 82-game exercise in tedium and stat collecting.

They played well enough to get home ice advantage and that’s all they really need to get started.
Yet, they probably didn’t want to face the Ottawa Senators in the first round, and they would have good reason not to.

Bryan Murray has put together an ill-humoured, nasty group of grinders while still retaining more top end skill than most teams in the East. It’s a potent combination and the kind of team that can go on a surprise run.

While no one except Washington and maybe San Jose or Detroit can match the skill of Crosby and Evgeni Malkin, Ottawa at least enters the orbit with Daniel Alfredsson and Jason Spezza. It’s unfortunate that Alex Kovalev got hurt as he would have been another formidable weapon that would have given the Pens defense some worries.

Let’s call Jordan Staal and Mike Fisher a saw-off in terms of effectiveness. Their games are a little different but they both play similar roles.

Overall, I’d even say that Ottawa has better forward depth than the Pens, with the underrated Matt Cullen, the bash brothers in Chris Neil and Jarkko Ruutu and well kept secrets in Peter Regin and Nick Foligno. Throw in Milan Michalek and the steady Chris Kelly, and you have as solid a group of skaters as any.

The Pens defense can score more goals and still play solid defense, but the Senators boast 3 of the best shutdown or physical D-men in the game in Anton Volchenkov, Chris Phillips and Andy Sutton. The young Swede Erik Karlsson doesn’t even know what nervousness feels like, so I expect him to be quite good in a playoff atmosphere, possibly better than he plays in the regular season. He has a lot of Alfie in his character and that will give Ottawa at least one bonafide weapon on the back end.

Both teams defense play vastly different styles, but I’d say that Ottawa might actually have the advantage here, at least through defenseman 1-4. Sergei Gonchar is still great but Kris Letang and Alex Goligoski can be infuriatingly inconsistent at times.

So then you break it down to the goalie position. This one is no contest. Marc Andre Fleury is the proven guy and Brian Elliott is the greenhorn. I find goaltending one of the hardest positions to predict, probably because they’re all nuts in the first place. Just because Elliott is green doesn’t mean he can’t stand on his head. Every goalie has to start somewhere and this is Elliott’s first real chance to show what he’s made of. But until then, Fleury gets my respect in this battle.

When you look at it, these two teams are more even than you think. Just writing this piece may have convinced me that the Senators have a better chance than I originally thought.

Yet even if the playoffs only last one round for Senators fans, they should be proud that their team fought their way back there after a tumultuous couple of seasons which had a lot of pundits questioning their heart, their dressing room, their fans, and even their location for an arena (again and again!)

As the cliché goes, “anything can happen in the playoffs”. You just never know when it’s going to be your year.

I’ve rounded up my old pal at Blood Red Army to partake in the annual first round predictions, and here they are for you to pick apart.

Let us know where we did right, and where we swerved off the road…

Paragraph by paragraph, it's tough to argue with you. You've got some good points. I think that the series is definitely within the Sens' grasp.

I think it'll be tough for them to win if Elliott is average. He has to be great.

Our D is big and tough, but they do not generate much offence, aside from Karlsson. That worries me. If we fall behind due to some soft goals, it'll be tough to come back.

Will the season be considered a failure if we lose? No, because expectations were not high to begin with. That's the real story.

The fact that expectations have fallen, over the last few years, in this hockey mad market is amazing. Especially, when you consider the fact that we have a solid core of talent to build around (Alfie, Spezza, Fisher, Phillips, Volch, Kelly, Neil).

After reading this, I am now excited for the playoffs thinking that the Sens will at least be competitive.

I'm glad you changed the banner. Alfie scoring, is sure to generate better vibes, than Neil spitting.

Yo Milks!
It's Chuck from PA U.S.A. from the old "Outlaw Blues" days. Just stumbled across your blog while reading the Pensblog and thought I'd say hello...

Glad to see that my Pens are back in the playoffs but I'm not as confident as you are that they can flip the switch during the playoffs and make another run.

Too much inconsistancy and big question marks about MAF and the power play.

I hope they were just coastng through the regular season waiting for the tounament but I have my doubts.

I'll be reading your comments over the next week along with my usual Pens sites. Good luck to your boys-I think we have a series on our hands.