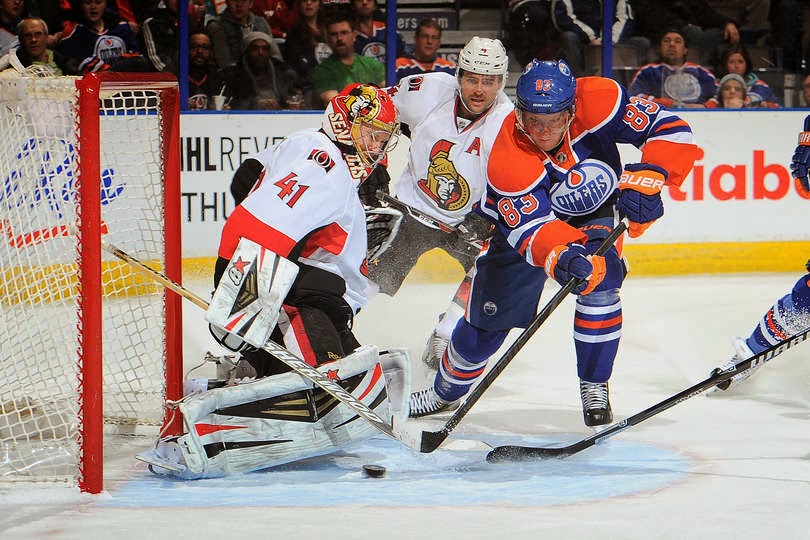 A busy day for the Senators that started wobbly with Cory Conacher getting picked up on waivers by the Buffalo Sabres, but things brightened up (for some) with the announcement of a new Chris Phillips contract and a trade for Alex Hemsky from the Oilers. It’s been a busy day for me as well, so let’s get right into it, move by move.

There were a lot of upset people on Twitter yesterday with news of Conacher being on waivers, and even more anger when he was picked up by former Sens assistant-GM Tim Murray in Buffalo today at noon. The screaming is understandable from a lot of angles, especially in light of Ben Bishop dominating in Tampa Bay, but I think it’s all a little overblown.

First, does the thought of Conacher in a Sabres uniform really put a scare into Sens fans? I don’t think so. I like Conacher’s feistiness in front of the net and his courage on the ice, but the Senators aren’t losing a key player here.

If it wasn’t for the fact he was moved for Bishop, Conacher would have been out of the lineup or waived a lot faster than he was. It just didn’t work out for him here. At least GM Bryan Murray has essentially admitted his mistake and isn’t going to force the organization to pay over and over again by forcing a player who doesn’t fit on the team just because the GM’s pride is on the line. Murray blew that trade and he knows it. Now it’s time to move on. As some pointed out on Twitter today, Murray robbed Phoenix out of Kyle Turris – you win some, you lose some. The point is not to let the ones you lose distract you from going forward.

Second, there seems to be a recurring complaint that the Senators could have gotten at least a late draft pick for Conacher instead of losing him for nothing. I’d share that complaint if it was realistic. If somebody was willing to part with a pick, Murray would have gotten it. To think that Murray didn’t try to move Conacher before waiving him is nonsensical. Of course he did. Waivers are always a last-resort. The trouble is, teams like their draft picks and they also like free players. A lot of guys make it to waivers because nobody wants to part with an asset for them.

But if they’re free? Sure, a lot of teams will take a chance on a free player. That’s what Tim Murray did on Conacher and wasn’t about to part with a pick in a rebuilding situation. If Conacher was as valuable as a lot of Sens fans think he was, Murray would have had no trouble moving him.

Third, Conacher is a pending RFA next season. With his game being so up and down, mostly down, how do you determine what kind of contract he gets? His short career has been so uneven that it makes for a headache just trying to figure it out. That’s one less contract negotiation for Murray and opens the door further to players like Mark Stone, Mike Hoffman, Shane Prince, Matt Puempel and Jean-Gabriel Pageau among others. All of the above are better prospects, in my mind at least, than Cory Conacher is.

Fans feel like all young players are precious cargo and flinch when one is cast off, especially in the manner that Conacher was. Truth is, a lot of them just don’t work out. When you have so many in the system, as Ottawa does, you have to make judgements quicker in order not to stall the progress of others. When one doesn’t work out, you part ways and give their spot to the next guy. That’s what Ottawa did here with Conacher and I think it was the right move, despite how bad it looks with Bishop.

Great move when you consider how little Bryan Murray had to give up to get the slick winger from the Oilers. A 5th round pick in this year’s (weak) draft and a 3rd rounder in 2015, while the Oilers also pick up half of what Hemsky is owed for the remainder of this season.

For that modest sum, the Senators get a highly-skilled winger to play with Jason Spezza for at least the stretch-run as they desperately try to get back into the playoffs. Even if things don’t work out in that regard, they get a good look at what Hemsky can do, see if there’s chemistry with #19 and have first crack at contract negotiations with him before Hemsky becomes an unrestricted free agent in July.

If Ottawa likes Hemsky and can get him signed (and they’ll have the cap room and possibly the budget to do it), that allows them to avoid the summer UFA season looking to fix the same old vacancy next to Spezza. The Senators have had rental players before, but Hemsky is a little different due to his age (30) and game-breaking talent. This isn’t Matt Cullen, Mike Comrie or Peter Bondra. They can now work him with Spezza for 20 games and I’m betting Hemsky will grow to like that very quickly.

You can also think of a possible Hemsky deal as a hedge against Bobby Ryan or Clarke MacArthur possibly leaving as UFA’s in 2015. With deals for Spezza, Ryan, MacArthur, Craig Anderson and Marc Methot expiring in the summer of ‘15, there’s going to be change on the way no matter how optimistic you are. Signing Hemsky might mitigate some of that upheaval. He would also be an instant replacement for fellow Czech Milan Michalek who is expected to leave this summer as a free agent. Of course, Hemsky might have his mind set on picking a sunny locale after living through winters similar to what Norwegians call “the long dark tunnel”. Would you blame him?

On the negative side, if it doesn’t work out and they can’t get Hemsky to sign, they’ve given up very little and might be able to recoup those draft picks in other deals. Bottom line is they grabbed a top-6 forward looking for a fresh start and didn’t give up a single prospect in their system. They even got a discounted salary. Eugene Melnyk will be happy with that, as Hemsky not only gives this team a much better chance to realize some playoff revenues this season, but he’s dirt cheap during his audition.

Hemsky has been locked away in the basement of Edmonton for so long that Ottawa will seem like a new lease on life for him. That could go a long way to making him want to stay and Murray would look pretty good getting Hemsky’s signature on a contract. 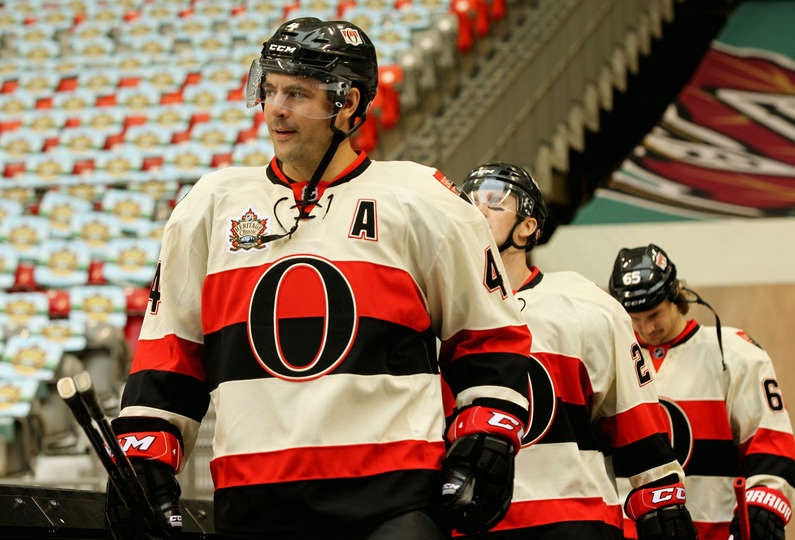 This was a deal that just had to get done for a number of reasons. Phillips took a little less money overall to get that 2nd year on the deal ($2.5 million per, down from his current $3m salary) but the compromise from both sides of the table will help this team in the short and long-term.

Phillips is, along with Methot, this team’s most dependable defensive D-man and is usually paired with young defensemen new to the league, whether it’s Jared Cowen, Eric Gryba or, currently, Cody Ceci. The Senators have to love what they’re seeing from Ceci so far this season, like his courage to make plays far up the ice which we saw on one of his goals in Vancouver last weekend. A lot of that confidence comes from playing with a steady figure like Phillips.

The struggles of Cowen and Patrick Wiercioch probably forced Murray’s hand with Phillips, but there’s also something telling me that Murray wanted no part of losing another community icon like “Big Rig” after what happened with Daniel Alfredsson this past summer. You can tell how popular and beloved Phillips is in that dressing room as well. Trading a guy like that would have been tough for everybody. In the end, the Senators get Phillips for a bargain compared to what he would have gotten as a free agent.

And when Phillips surpasses Alfredsson for the all-time games played as a Senator next season, the organization will have a feel-good story that will go a long way in erasing some past mistakes that may or may not have anything to do with old #11.

In a minor move, Joe Corvo, who cleared waivers today, was loaned to the Chicago Wolves of the AHL for the remainder of the season. That clears a bit of a jam on defense and now the Senators have just 7 defenseman on the roster which is a bit more comfortable for everyone. It’s tough to see two scratches every night on D, and Corvo has been the forgotten man back there. I thought Corvo was fine in his sporadic starts and could have played more, but coach Paul MacLean didn’t trust him and that’s good explanation enough for me. Corvo might have deserved a better fate, as did Conacher, but whoever said the NHL was fair?
Posted by Jeremy Milks at 3:13 PM

I love this article. Best one I have read from you yet :-)

I guess I just don't understand why Conacher was put on waivers. I agree we won't terribly miss him but if we are willing to have him walk, why not wait till end of season? Is it a money thing?