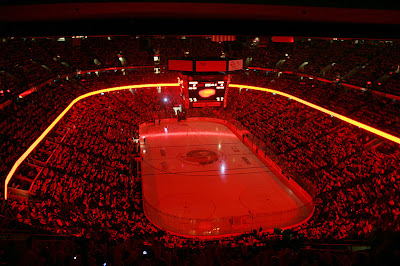 With news that a guy fell out of the 300 section down into the 200's last night at Scotiabank Place, it brought me back 3 years to a story I actually had to cover for the Ottawa Xpress about a guy who took a flying hot dog in the eye from the "Master Blaster" of Spartacat.

Thankfully he ended up being okay but it might have been the funniest story I ever had to do. He was genuinely upset about the whole thing (and rightfully so) but I could barely keep a straight face during the interview. It was just so ridiculous.

"I took a hot dog bazooka right in the eye. It was wrapped in tin foil and a cup, I think, I don't know. I didn't even get the hot dog in the end. It landed in the aisle and someone must have grabbed it. The people sitting next to me were like 'Holy cow, are you all right?' because the impact was pretty loud. "

The thing that breaks me up to this day is that he was so bummed that he didn't get to eat the hot-dog. He also resembled a certain singer of the band Journey. A real good guy with a really funny story.

It looks like the war is over. The Senators theme song is a goner and the ad-hoc campaign to keep it playing during the game openings is dying a slow death to the much flashier and hipper Rev Theory.

But for those who remember, and who want to relive the good ol' days, here's the MP3 of what is now just a dusty old relic.

It was corny, but it was ours.

That was beautiful. I can't stop crying. Bring the anthem back, Eugene!

Seriously, can we get a petition going?

i saw they guy get hit.... it was tragic

Efforts must be re-doubled. We cannot allow The Theme to die like this. Contracts need to be taken out on people. Property damaged. Pets stolen. This is an outrage. The revolution starts now. Are you listening Geno?

I'm all for the petition, or any other action. If anybody in Sens Nation has any productive ideas on how to resurrect the Theme, let's hear them.

That's the first time that I've heard Melnyk referred to as Geno. I like it. Can we anoit Geno as his new nickname? Kind of like Spezz, Heater, Alfie, Fish, and now Geno.

Sending e-mails to this guy cant hurt. Glen Gower is the director of gameday entertainment for the Senators. His e-mail is gowerg@ottawasenators.com and his phone number is 613-599-0256. He responded to my last e-mail so at least he's hearing what we have to say.