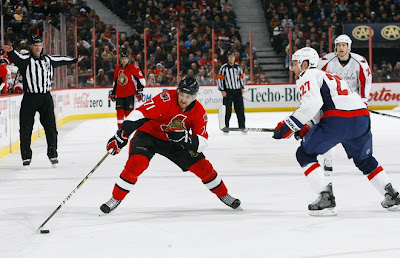 There are a lot of things going wrong for the Senators this season and blame can be placed in any number of areas, from a badly managed power-play, to the ultra-soft defense, to Pascal Leclaire's health to Alex Kovalev and Sergei Gonchar's inconsistent play. Take your pick.

Yet when you get right down to it, the struggles of Peter Regin and Nick Foligno have cost this team more than any of those other obvious problems and here's why.

Like most teams, the Senators have a group of known commodities whose point production have either remained steady or regressed slightly. Guys like Jason Spezza, Daniel Alfredsson and Mike Fisher. Core guys who are going to perform most of the time. But what really puts teams into a good position is when two or three young guys have career years and evolve into a consistent scoring threat, usually playing against other teams weaker defensive players or just in the shadow of stars on their own team. Every team needs at least one or two of these guys or they're dead in the water.

Unfortunately for Ottawa, the players expected to have career years - Regin and Foligno - have struggled and there's no one there to fill the gap as far as goal-scoring is concerned. Regin has fallen to the fourth line in recent weeks and has a single goal to call his own all season, and no points in December.

Going into this season, the Senators were expecting both Regin and Foligno to score somewhere between 15 and 20 goals apiece, and with the addition of Gonchar to the defense core, scoring was going to be a strength of this team, as opposed to last season where Fisher led the team with a measly 25 goals.

Nearing the half-way point of the season, it's clear that both Regin and Foligno have failed to exceed expectations and that's why this team is more than likely to be on the outside looking in come playoff time in April.

Foligno has improved lately and is finally showing some scoring punch, with 5 points in 10 games but he still only has 3 goals on the season after struggling last year with just 9 goals. This was supposed to be his comeback season but in the early going, he got away from his strengths, which were driving to the net and playing physical along the boards. It looks like playing regularly with Fisher and Alfredsson has rejuvenated his game but is it too little too late?

Regin and Foligno make significantly less money than a lot of other players on this team who are struggling but that doesn't let them off the hook. Matt Cullen was let go and Bryan Murray chose to boost his defense in unrestricted free agency rather than bring in another big name forward. That's because Regin and Foligno were expected to take the next step in their careers.

Their utter failure to even provide modest scoring totals has set this organization back a full year and put more pressure on older veterans like Alfredsson, Spezza and Kovalev to produce every night even though they always face the other teams best defensive players. It also doesn't help that Milan Michalek has struggled after coming off a major knee operation. That leaves Alfredsson as the lone winger on this team who is providing offense, and he's coming off one of the longest slumps of his career!

And people are shocked this team isn't going to make the playoffs?

There's room for Regin and Foligno to grow and be an important part of this team going forward, but this is already looking like a lost season for the pair.

Looks like Mike Brodeur was wearing the Garth Snow inspired upper body armour and shoulder pads on the bench tonight against Washington. His shoulders were as high as his ears and he would also have trouble walking through a doorway with those things on. Those can't be legal..... Will Erik Karlsson be an All-Star as soon as next season when the game will be held in Ottawa? I'd put some money on it. In my mind, he's already this teams best player outside of Alfie...... Ever wonder what coach Cory Clouston would look like with a beard? Wait no longer.....

Most unintentionally hilarious moment of the night: Late in the first, Brian Elliott made a desperate, exciting save off of Mike Knuble in front of the net, which had Sportsnet colour commentator Denis Potvin enthusing "if you're a fan of the Senators, you have to be excited with the way they're playing hockey right now". Immediately the cameras went to the fans near the glass and it looked like they were watching the English Patient, all of them seated, unsmiling, with one old man sort of clapping half-heartedly with a sneer on his face.......Had to laugh at the Thrashers publicity campaign, where they had their mascot "Thrash" arrested on camera after he led police on an O.J. style car chase and "held in prison" until Atlanta fans snapped up 5000 tickets to upcoming games. Not bad, but it will never match National Lampoon's magazine cover in 1973 shown below when it comes to public extortion. 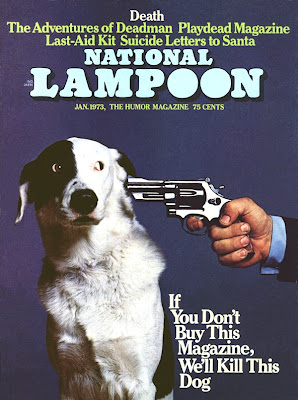 And finally, in case you missed it, Dale Weise hand an eventful first NHL game with the Rangers, having a fight and a goal he kicked in called back after video review. But the moment we'll all remember was this:

LOL - that video is awesome... thanks for the laugh, Milks. I really needed it after that shit-show tonight!

"and it looked like they were watching the English Patient, all of them seated, unsmiling, with one old man sort of clapping half-heartedly with a sneer on his face"

I laughed heartily at this, because that's me and my friends so many times...just sitting there looking effin miserable and cynical and expecting to be spoon-fed results.

That said, you made an excellent point about the foot soldiers not carrying the day. It really isn't unreasonable to expect Regin to produce 10-15 goals, about 15-20 assists and same from Foligno. Why hasn't it happened? Who knows...but it's not helping.

Just heard Steve Lloyd say the Murrays are likely here next year! Yikes! Don't expect me to shell out any money if that's the plan!
Change is needed at the top, a new direction, new ideas...unconstrained by past ties or city ties.