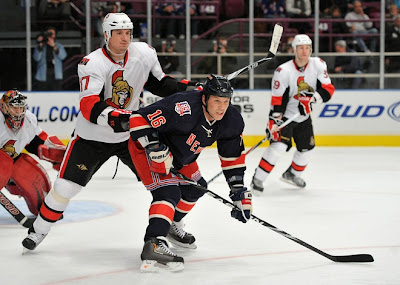 So what happens next?

That must be the question Senators fans are asking themselves after their team came back with 3 of a possible 4 points over the weekend after the season lowpoint of losing to the Sharks and Dany Heatley on Thursday.

A shootout loss to the Sabres on Saturday and a big win against the Rangers on Sunday may have outright saved coach Cory Clouston's job in the short term. Not just because of the much needed points, but because in both games the Senators looked determined for close to 60 minutes, signs that the players haven't quit on their coach. Clouston is basically fighting for his job every game now because he doesn't have a contract for next season. The Senators would have to eat very little money if they decide to make a change and have GM Bryan Murray go behind the bench. But that still seems very unlikely, at least for now.

Yet the goals still aren't coming as easily as anyone would like and that's still a huge warning sign to anyone who thinks the slump is over. The offensive players are just as snakebit as before, and Clouston is still too stubborn to try a new combination, in particular breaking up Jason Spezza and Daniel Alfredsson. Clouston finally relented and put back together the best line he's had since last year's playoffs, and that's the Kelly-Neil-Ruutu line and they were again the difference makers in New York, with Kelly continuing his steady season by notching a hat-trick. Keeping that line together would be a good start for Clouston.

On the other hand, the Senators sure do lack the entertainment factor this season. For the most part, the games have been a bit of a drag to watch, with very few goals, very few memorable moments, and almost no physical play whatsoever outside of Chris Neil doing his part every night.

It could be the system they play, although they still seem to forecheck aggressively most of the time, or it could be the lack of speed on the team. The players they have on the roster have been exciting to watch at other times in their careers so why not this season? Are the reins on too tight or have the older players gotten too slow to do what they used to do?

Hitting seems to be going extinct in the NHL ever since everyone got up in arms over a few rare checks that ended in serious injuries. Now they're throwing out the baby with the bathwater and the entertainment level of all the games has dropped accordingly. So it's not just the Senators but they could still use another big body on the blueline with some nastiness (like .... uh.... Andy Sutton) as well as someone who can actually score to play wing with Spezza.

Chances of Murray getting these components are pretty much nil on the trade market, at least not until February when it might be too late anyways.

Still, there is a lot more to be positive about after this weekend then there was after the Heatley game.

The Senators have two goalies who are both playing excellent hockey right now and it seems that no matter who Clouston throws out, the team is going to get a good game out of them.

A game against the Rangers last season was a turning point for the Senators and the streak they pulled off after that was what put them in the playoffs.

I like Andy Sutton, and I liked what he brought to the team. But, I'm getting sick of the Sutton nostalgia, and this notion throughout the media and blogosphere that he is some sort of answer to our struggles.

Our record was worse with him here, than it was before he got here.

I think the biggest problem right now is a lack of offense. Today was good. Let's keep it going.

Thumbs up to Kelly and Leclaire.

Critical difference between this one and that one is Anton Volchenkov, who was named first star, if I recall correcrly, in a 7-6 win against Washington or some absurd score.

Much as Senator managemetn is loath to admit it, letting Anton go will go down as one of its biggest mistakes.

Also bear in mind last season was an Olympic year, so players were kinda "meh" in preparation for the Olympics and rusty/re-focusing afterwards.

I'd love to see another such win streak but my gut tells me we lose in Montreal then lose a few more this week. Maybe in February Murray will come out of hibernation and make a decision and perhaps some moves beyond Bobby Butler.