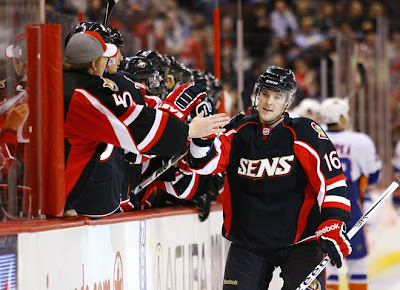 How could anyone have guessed the Three Amigos – college grads Bobby Butler, Erik Condra and Colin Greening – could be this good? Of course, a lot of credit for the team's recent turnaround has to go to Craig Anderson, but those three college kids have provided the energy that's been lacking all season long.  All three have been unbelievable in their short time up here since Bryan Murray decided to remold the team, especially Butler. All this guy does is shoot the puck. Doesn't matter where he is, he just rifles it on net.I think the difference between college players and junior players is that, for the most part, you can predict how a guy from junior is going to compete (although who could have guessed Jeff Skinner would be this good so quickly). The college guys play so many fewer games that it's harder to get a good read on them. Sometimes a GM can hit a home run with a college grad and credit must be given to Murray and his coaching staff for constantly seeking out guys like Jesse Winchester and Butler on free agent deals…..How depressing were the swaths of empty seats in Atlanta on Thursday? Something seems to be really wrong for the Thrashers on the ice as well. All of that excitement a good first half brings seems to be gone and they didn’t show much urgency against the Senators even though they are life and death to make the playoffs. If they could somehow squeak in and upset their first round opponent, it could change everything for them off the ice as well. You’d be surprised how far the goodwill of just one playoff series win could do in a market used to losing……. But I have to say I love the blue seams in the rink glass at Phillips Arena. Maybe the Thrashers could take that idea with them when they move to Quebec City in a couple of years and call themselves the Nordiques…..

…..Would it be bad luck for Anderson to switch masks? He’s still wearing the Avalanche colours with a couple of grisly looking “Abominable Snowmen” but apparently has a new one in the mail from the designer. If he plays for Ottawa next season, he should keep the monsters and just change their colours so they look like the Sensquatch that can be seen stalking around from time to time around town. The parallel indigenous monster in the Ottawa valley would be the politician, but images of Jason Kenney and John Baird would be much too scary for children….They were showing the 1996 playoff series between Detroit and St.Louis on the NHL Network the other day and the sight of Steve Yzerman blasting a perfect top corner slapshot past Jon Casey for the Game 7 overtime winner is still one of the best moments I’ve ever seen in hockey. Somehow, Detroit did not go on to win that season, despite having one of the best teams in NHL history (in the regular season anyway). In the next round they ran into Patrick Roy. End of story. It’s interesting to point out that Scotty Bowman went and got Mike Vernon after that, the only goalie to beat Roy in a Stanley Cup Final series when he did it in 89 for Calgary against Roy’s Canadiens. And as usual, Bowman was right. The Wings beat Roy in the West in 97 and went on to beat Eric Lindros and the Flyers for Steve Yzerman’s first Stanley Cup….. It was also strange to see Craig MacTavish of the Blues skating around without a helmet in that 96 Blues-Wings series. He would play one more season and was the last NHL player to go open dome. When you think about it, 1997 was not that long ago. In less than 15 years we went from that to a league where there is serious debate about making the head completely off limits to any contact. If they eventually take hitting and fighting out of the game, maybe players can go back to the helmetless era after all…

...Did Cyril Leeder really say it could be a couple more years until they replace the scoreboard at the Kanata rink? I find it hard to believe the Senators would host the All-Star Game, an important showcase for your franchise, with a scoreboard that everyone knows needs to be replaced. Maybe it’s harder to buy one than we think…..Chris Phillips has been a lot better lately and he might have played his best game of the season against Atlanta on Thursday night. He was a bull in his own end and fought with everything he had when the Sens were trapped in their own zone in the last minute with Chris Mason pulled for the extra attacker. He was still (in the words of Pierre McGuire) “sucking dirty pond water” when he was giving his customary glove taps to his teammates as they skated off the ice after the big win……. Brian Lee still holds the title of “Youngest Looking Senator” but Erik Condra is providing stiff competition. Let’s hope he looks that astonished and happy after every goal he scores….. Which makes me think of the least happiest looking people after a goal. Alexei Kovalev rarely broke a grin after a goal, making it look like it was the most natural thing in the world, like breathing. Joe Sakic never smiled much either, on or off the ice. But for every one of those guys, there are the likes of Chris Neil (his missing teeth make him look all the happier), Alex Ovechkin, and in the past, Mark Messier, whose whole face would disappear when he smiled. Was there anyone ever more joyful than Messier when Gary Bettman handed him the 1994 Stanley Cup in Madison Square Garden? If there was, I haven’t seen it……

….. Marek Svatos hasn’t gotten off to a great start in Ottawa but you can see flashes of why he once scored 30 goals in this league. He has little bursts of speed which can fool defensemen and some soft hands but it looks like something is missing right now. Maybe it’s just confidence, but he better find it before the season is out if he wants a contract offer from Ottawa. He’s certainly an intriguing player with lots of potential to help this team once he gets more settled. Svatos is in a good position with Ottawa because not many are expecting a lot out of him right now. With the emergence of the college kids, Svatos is almost the forgotten man here, but I’m sure management is watching him just as closely as the rookies to see if they could have a bargain on their hands. The jury is still out…..
Posted by Jeremy Milks at 10:52 AM

Couple summers ago, it took about half of the summer to install a new scoreboard in Brandon for the Memorial Cup. It can't possibly take years.

It doesn't, Leeder is just cheap.
Pretty sure there is only one scoreboard manufacturer for NHL rinks. They cost around 4-5 million and they only make one or two a year...remember seeing someone on HFBoards posting about this a while back. The RFP stuff is garbage. Seriously, we don't sign Phillips and another player and we get a new scoreboard. Heck, we didn't sign Kovalev last year and we get a new scoreboard...stop putting it off for crying it out loud. It makes us look bushleague. Can we afford an NHL team in this city or not?

As for Winchester, what does he bring? How is this a good signing by Murray at all? He's a 4th line plug that doesn't win faceoffs, has no speed, can't hit, doesn't score, is average defensively and he got a raise...for scoring 3-4 goals and getting 5-6 assits a year.

This team is brutal. I question why I go to 8-10 games a year sometimes, especially with the advent of HDTV.

It is becoming more and more apparent that the wrong people own and run NHL hockey teams. It is so obvious that those of us that contribute comments are the best people to either own or manage these things.

I wonder why it is that we don't actually do just that?

'This team is brutal. I question why I go to 8-10 games a year sometimes, especially with the advent of HDTV.'

i question why people like you go to games too.