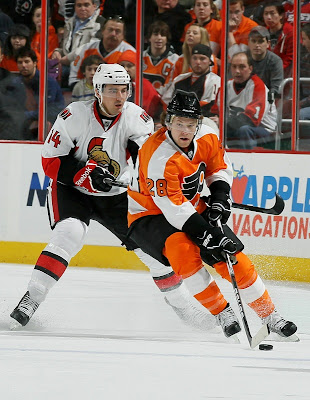 Some notes on trade deadline day:

Got to say I like what GM Bryan Murray accomplished in the last 24 hours.

Signing Chris Phillips to a reasonable deal for the next three years will help stabilize the young defense the Senators will have starting next season and onwards. Both sides gave concessions: Phillips probably left quite a bit of money on the table he could have gotten in free agency and the Senators granted a no-movement clause in return. Murray said in an interview with the Team 1200 that he was going hard after Phillips and in the end it was the right move to keep number 4 in town for the first phase of the rebuild.

But that Phillips contract necessitated further moves on that blueline, and today it was Chris Campoli who was shipped out of town. This summer may see Filip Kuba traded or bought out if they still need to make room for the likes of David Rundblad, Jared Cowen, Eric Gryba or possibly another top defenseman they snag in the upcoming draft (Murray ended up getting five extra picks in this draft after all the recent trades).

The return on Campoli was phenomenal (a conditional second rounder and 26 year old Ryan Potulny) considering that his stock had fallen ever since being in a package with Mike Comrie for a first round pick and Dean McAmmond. Campoli played somewhat decent this season, but it masks the disappointment that he couldn't find the offensive side of his game since coming to Ottawa. If Campoli is not scoring for you or playing on the power-play regularly, the other aspects of his game are not enough to warrant keeping a youngster from playing in his spot going forward. Knowing that they were going to have a headache of a contract negotiation with him this summer, Murray moved him to the Blackhawks and that's that.

If Kuba is moved out somehow, the Senators could be looking at a top six of Gonchar, Phillips, Karlsson, Rundblad, Carkner and Cowen, and possibly with the much improved Brian Lee still fitting into their plans. 3 youngsters, 3 veterans. A pretty nice balance. But who knows what can happen during free-agency.

Murray also picked up Curtis McElhinney on waivers from Tampa Bay to backstop Craig Anderson for the rest of the season, a prudent move which allows rookie Robin Lehner to get some serious playing time in Bingo.

No one is sure what plans the Senators have for the former Flame McElhinney beyond this season, if any, but this may also be an audition for the backup spot next season. It would be interesting to see the Senators go after Mathieu Garon of Columbus as a free agent to backup Anderson next season (assuming Anderson re-signs, not a given by any means) but that type of speculation is not really my bag.  All of the Senator goaltenders under contract except for Lehner could walk as free agents this summer. That's got to be a worry for management but the summer still seems a ways off.

Finally the speculation and hand wringing can end for both the players and the fans. The deadline is over and there is a month and a half's worth of hockey games to be played.

Personally, I enjoy the post-trade deadline period the most in a hockey season because it just becomes about the games on the ice, not off of it. A lot of fans get their main enjoyment from the "chess match" aspect of player movement instead of the actual games, which is strange to me. No trade deadline day can compare to any day of the playoffs, even if the team you are cheering for is not in the dance.

Contracts don't matter in the playoffs. The players do it for free.

Trade rumours and endless money discussions can go to hell for the next four months.

Too bad they can't stay there.
Posted by Jeremy Milks at 6:57 PM

>Murray also picked up Curtis McElhinney >on waivers from Tampa Bay to backstop >Craig Anderson for the rest of the >season, a prudent move which allows >rookie Robin Lehner to get some serious >playing time in Bingo.

I agree, though Barry Brust is playing so well I'm not sure how much playing time he'll get down the stretch, given that Bingo is still fighting to hold down the playoff spot they have.