Brady Tkachuk Is Out Of Control... And We Like It 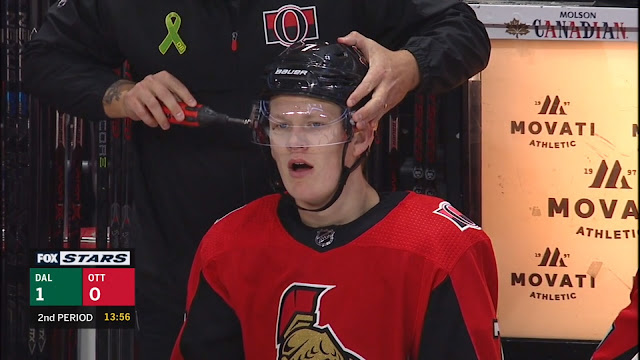 It’s been a long time since we’ve seen a smile on Pierre Dorion’s face that didn’t look forced.

Yet the morning before his 2-2-1 Ottawa Senators faced the Dallas Stars, the GM was making the local media rounds on television and radio with a detectable skip in his step. On camera with CTV’s Henry Burris, Dorion was the picture of relief, spinning hope that just a month ago seemed all but impossible.

And who could blame him?

Even the most moderate of pundits predicted total agony for this franchise, and the fact that this young-ish Senators team wasn’t 0-5 seemed like a Hail Mary that actually came through and landed into Dorion’s outstretched hands. Although everyone is happy to remind us all that it’s too early to be gloating about anything, letting Dorion enjoy this small moment in time seems more than reasonable.

I don’t see any “gloating”. I see a sort of collective “Oh”, the kind of muted response that seems appropriate for the occasion. Nobody is saying this team is going to swagger across the finish line into the playoffs, but it doesn’t look like they’re going to drive off a cliff either.

That same night, the Sens went out and smothered the explosive offense of the Stars with a 4-1 victory in front of a small hometown crowd of about 12,500. Two of the kids, Brady Tkachuk and Max Lajoie were instrumental in the win. After the game, goalie Craig Anderson told reporters that Tkachuk and Lajoie were “the heartbeat of this team, not only on the ice, but in the room”.

Now think about that quote for a second. This is Anderson, a fairly quiet but honest veteran player, telling reporters that a 19 and 20 year old pair of rookies are the “heartbeat” of the team. I’ve never heard any player say that, at least not that I can recall.

Dorion didn’t do any post-game pressers of course, but I’m willing to bet a few dollars he tipped back a drink of his choice and had a hell of a peaceful sleep out in lovely Orleans.

After all, Dorion and Eugene Melnyk made the ultimate gamble with their fan base by trading away Erik Karlsson. And unsurprisingly, they’re losing on that front in the short-term, with attendance low and the season ticket base rumoured to be at rock bottom levels.

Yet, despite all of this negative public and media sentiment, there is more than a trickle of positivity coming back to this team. You see it in little ways. Twitter, which is ultimately the barometer for the most extreme fans, has recently been dotted with lines like “I hate that this team is making me want to like them again”.

And that really sums it up, doesn’t it?

Watching Tkachuk barrel around the ice like an out of control fire truck isn’t exactly grace-in-motion, but it’s undeniably entertaining. Last weekend, with the Senators up 5-1 on the Kings late in the 3rd period, Tkachuk was battling in front of the Kings net like his very life depended upon it. You’d laugh if it wasn’t so impressive. It’s rare that a player can skate by him without getting a quick, almost invisible slash on the arms, and when he gets back to the bench he’s always laughing or yelling about something.

Meme’s have quickly spread of Tkachuk in all sorts of strange comedic situations, like his now infamous cringe reaction to Lajoie on television or getting his helmet screwed tight on the bench like he’s in a Three Stooges skit. His baby face just seems to accentuate all this, yet it’s a bit deceiving.

He doesn’t look at all like a 19 year old rookie when he’s rambling around ice like he’s trapped in a cage. He’s scored 3 goals in 4 games which leads all Sens forwards in that category. He’s 2nd on the team in shots behind Lajoie, 3rd in power-play points, and he’s done all this after missing the first two games of the season.

Every time he scrambles over the boards, you can feel the fans pay attention in the rink. Everybody watches this guy because it’s impossible not to. Wherever he is, helmets fly off, people lose their sticks, nets come off their moorings and plexiglass sways dangerously.

In a way, he’s the anti-Karlsson. The former Senator was all sleek skill and silent speed. Tkachuk is all arms and legs and chewed-up mouthguards.

But the fans are starting to eat it up.

Even my own 8 year old son, who, horrifyingly, has shown absolutely zero interest in his father’s favourite pastime, saw a clip of Tkachuk on TV and said “Who’s that guy? He’s kinda funny and crazy.” Before this, the only interest he’s had in hockey was singing word for word Brian5or6’s “Hotsam Batcho” song… again to my horror.

Suddenly this team has a few budding stars to market and it doesn’t seem like a total reach. It helps that Thomas Chabot and Tkachuk are both comfortable in front of a camera. Chabot probably had to learn it on the fly in a second language while Tkachuk just inherited it naturally from his NHL family.

There’s still more than a few long and short-term worries however.

Logan Brown’s apparent unreadiness for the NHL this year surprised me. He’s fallen out of favour a little with prospect watchers but I easily envisioned the big centremen stepping in right away right behind Matt Duchene. Turns out he’s in the AHL, sidelined by an injury while Filip Chlapik, Rudolfs Balcers and Drake Batherson are all making their case to be the next call-up. Brown feels like a century away right now but that can all change pretty quickly.

Cody Ceci continues to struggle, both on the ice and with the fans. Two wins in a row with Ceci sitting out injured isn’t going to put this to rest anytime soon. Thankfully Chris Tierney and Dylan DeMelo, both acquired in the Karlsson deal, have been revelations in their roles, making the disappointments of Brown and Ceci seem less vital.

And yes, you can always rely on worrying about contracts for Duchene, Mark Stone and Ryan Dzingel.

But maybe it’s okay for Sens fans to just enjoy the temporary hope while they can. Maybe, if things keep going the right way, it can be more than just temporary.

Remember the defiant quotes before the season started from Duchene and Mark Borowiecki? They were polite about it, but you could tell they wanted to stuff this season down everybody’s throats if they got the chance. There were clues sitting here in front of us that this team was going to fight like hell.

It was there when coach Guy Boucher seemed to snarl his displeasure at seeing veteran Zack Smith waived. Nobody was thrown under the bus but it was easy to detect an “us vs them” mentality forming. It had been too long a summer of the coach (who quietly does not have a contract extension) and the players just hanging out there on the clothesline being pecked at by everybody.

They had no control until they could actually step on the ice and finally do something about it. Now we might just have a team worth watching here, forged by the need to prove us all wrong.

How far they're willing to go to prove that point will be the entertaining part. Just don't take your eyes off that "crazy" Tkachuk kid. You might miss a garage sale.