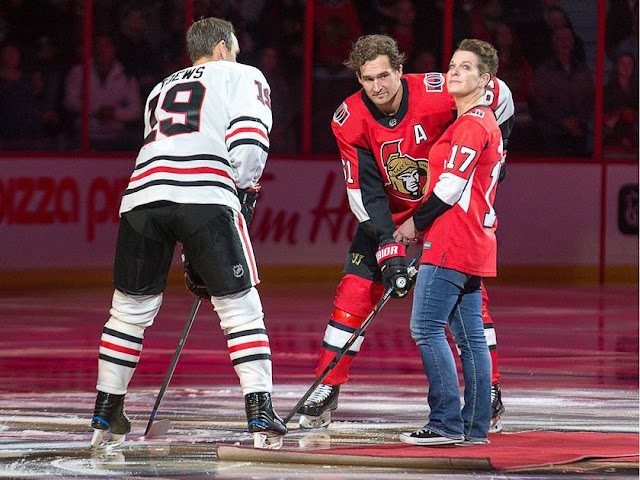 "When the going gets weird, the weird turn pro." - Hunter S. Thompson

I was thinking of that quote as I walked up to the arena gates with Brian5or6 for opening night of the Senators 26th season. At this hour he was looking rather together with a pressed shirt, blue tie and a shiny gold watch. Under his arm he carried a "Hotsam Batcho" jersey neatly folded, on his way to pick up his first set of media credentials.

Before we even got out of the parking lot, random teenagers converged on us and wanted pictures of themselves with Brian5or6. This happened at least a dozen times while I was with him, and who knows how many times when he was wandering the arena between periods. He handles it like a pro and people walk away happy and with something to post on Twitter. Well known local media personalities slap his back and invite him out for beers. Senators executives shake his hand and want his opinion on how the fans feel about certain issues.

"When the going gets weird, the weird turn pro."

In a summer filled with turmoil and disappointment for hardcore fans, Brian5or6 was able to make people laugh and occasionally even put down their pitchforks for a night. If it took falling down a set of stairs, smashing a TV with a shovel or just screaming profanities into an iPhone, Brian5or6 captured the angst and was able to diffuse it somehow. Some people felt better seeing him throw a television off a deck. It meant they could leave their own TV on the wall. Maybe it WAS just a game after all. 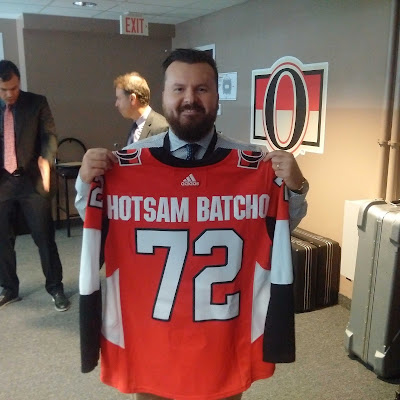 That's what Pierre Dorion said to Brian5or6 when he met him for the first time this fall. With a knowing smile on his face, Dorion pointed at him and said "I've seen you. That video. It's just a game, you know?" And they both laughed and shook hands. Sure, it's just a game to Brian5or6. But for Dorion? As he's become well aware, it's much more than that.

The young GM seems to live in a hurricane of negativity and pressure. The fans take turns blasting him or ownership, or both. Without an assistant GM for the entire summer, Dorion was tasked with trading the team's best and most popular player and launch a full rebuild in front of a increasingly agitated fanbase. He accomplished the first and initiated the second, but the results will be unknown for a while. Pundits will be counting attendance numbers more closely than goals on the ice. That's the kind of atmosphere Dorion has to try and thrive in. It's not really a hockey atmosphere anymore. It's a sort of pseudo-political task the Sens are trying to navigate. They're not the first pro team to go through this and they won't be the last, but that doesn't make it any easier for Dorion.

Meanwhile, across the continent, Erik Karlsson made his San Jose Sharks debut a night earlier – a loss – and people strained themselves to find meaning in the result. They’re almost used to seeing #65 in teal now since photos began to surface out of training camp of the smiling defenseman in his new colours. Everything seems so sunny there in contrast. It feels personal to Sens fans, as if every Karlsson grin is an indictment of the struggling franchise he just vacated.

Yet in a widely viewed Sportsnet interview on opening night, Karlsson wasn’t grinning very much. He seemed genuinely troubled by his departure from Ottawa, sometimes using “we” to describe the Senators, as if a big part of him were still back home, a word he often uses to describe this city.

There are countless Karlsson jersey’s on the backs of fans here tonight. No one quite knows what to do this early in the aftermath. Moving on is tough. You still see Hossa jersey’s from time to time, but not too many. Alfredsson sweaters are common, but there’s no anguish there anymore. It’s just old news, and someday this will be viewed the same. But it might be a while.

The actual game started on an emotional note as the mother of the late Jonathan Pitre, Tina Boileau, dropped the puck for a ceremonial faceoff after a video of her son, in various stages of his battle against a skin disease known as RDEB, was shown to the crowd. Somehow, she kept it together. Not many others could. They stood and gave her a tearful standing ovation while Jonathan’s inspirational voice was heard over the arena speakers. You don't have to be a parent to know how hard that must have been for her to remain stoic.

Spirits didn’t completely lift until Zack Smith, just a week removed from being on waivers, scored the Sens first goal of the season, and no one was happier than captain-in-waiting Mark Stone, who emphatically pointed at Smith with a crazed look of joy on his face. Stone usually reacts that way when teammates score, but this was something a bit more meaningful. It was momentary redemption for Smith, and it seemed to spur him on his following shifts, coming close to another goal in the first period. Maybe Dorion’s waiver gambit worked, if you take his word that it was meant to send a “message” to both Smith and the team. Like a few decisions the Sens have made recently, it’s a little shrouded in mystery.

Well, a mystery to everyone except Matt Duchene, who now famously said it was a "kick in the balls" to the dressing room. As some have already noted, there wasn't that kind of angry response from players when Karlsson was dealt, but in our search to ascribe meaning to the slightest of reactions or non-reactions, it's easy to get lost in it all. Let's not.

It was Max Lajoie’s first career goal to tie the game 2-2 that really lifted the fog. The kid who came out of nowhere (I kept having to look at the game sheet because his number 58 seemed alien to me) had his parents in the stands and the usual reactions happened after a player’s first goal – tears, more tears, strangers walking over to congratulate the mother and father. Soon we'll see Brady Tkachuk and his parents go through the same ritual, possibly in Toronto on Saturday night in front of a national audience if the hockey gods approve.

Everyone seemed to expect lots of empty seats (and in the dark corners of Sens Twitter, some openly wished it to prove a point), but it looked like most every game last year. Scattered sections with empty rows but nothing glaring. Official attendance was 15,858, with plenty of freebies, but it was a loud rink when Colin White put the Sens ahead on a power-play goal. When the Hawks pressed in the 3rd and began to take the game over, the crowd stayed behind the Sens and you could sense a little relief in the air. This team still has fans, after all the carnage of the summer and the billboards and the "laughingstock" sentiments from non-local media. Maybe they don't have many fans on Twitter, but neither do I. Only Brian5or6 does.

This market has taken vicious beatings in the past (the Rod Bryden bankruptcy, the Leafs) and they're taking one now, but I didn't get any sense of gloom walking around the rink. The kids were eating popcorn, the 50/50 sellers were barking, the drunk guys in Hawks jerseys were laughing with wives in Sens colours. Sure, there were a few awkward moments, particularly when a pair of girls on the huge video screen deftly swung around to reveal they were wearing Karlsson jersey's and the feed quickly cut, but for the most part it seemed like people still came here for the same reasons they came before.

It's just a game.

As I walked back to the parking lot with Brian5or6, I heard quickly approaching footsteps behind us and thought I was going to be in the middle of some kind of swarming/beating of a lifetime situation, but it was merely another young fan wanting a picture with my brother. His mom stood back smiling and thanking us while the picture was taken and the kid couldn't really form proper sentences. He just kept saying "I love your videos".

The mom and I exchanged a shrug and a smile.

When the going gets weird, the weird turn pro.
Posted by Jeremy Milks at 10:34 AM