Murray Wise In Not Adding Boyle 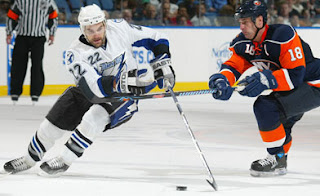 Now that Senators GM Bryan Murray has informed Tampa Bay that he is not interested in trading for defenseman Dan Boyle, there's a bit of a backlash going on among Senators fans already worried about Murray not being able to lure any big name unrestricted free-agents to town.
Instead of griping about Murray's perceived tentativeness, they should be applauding him for not allowing the team to be burdened by huge no-trade contracts like their Ontario cousins down Highway 7.
Boyle might be a tempting presence on the power-play but the Senators would be stuck with his no-trade clause that will follow him from Tampa Bay. Six years of a no-trade clause is nothing but a disaster waiting to happen, especially for an athlete who is already 30 years old and has had only two really good seasons in the league.
The optics look bad right now because athletes like Brian Campbell and Dan Boyle tend to be over hyped when they suddenly become available. You might give a player like Nicklas Lidstrom or Chris Pronger a six-year no-trade contract.
But Dan Boyle?
Murray is doing the right thing by being patient.
Right now, a player like Mathieu Schneider with one year left on his contract is a much more suitable replacement for Wade Redden.
.If people were so angry with Redden for refusing to waive his no-trade clause, why would the fans be angry with Murray for not wanting to bring another player with a similar problem into the organization?
It makes no sense on any level.
.
EDIT: Dan Boyle has been traded to the San Jose Sharks (TSN, Kukla's Korner)
.
The reported price is steep - Matt Carle, 1st Round Pick, a prospect and a fourth rounder.
.
Way too steep a price for Murray to pay, both on the players and picks going out and the heavy no-trade contract coming in.
.
Murray deserves kudos for passing on this deal.
Posted by Jeremy Milks at 8:47 AM

Testify. Fans shouldn't get caught up in the media reports. Murray made it very clear that the Sens didn't have the cap space.

Murray's not an idiot.

Just say no to TO contracts.

Schneider is almost 40...not sure I'd want him either.

San Jose is out of their mind. Blake for $5M and now this?

FWIW, I am told that when a player waives their NTC, the new team does not pick up the NTC. It is apparently permanently waived.

I didn't think this was the case (and haven't confirmed by reading the CBA :) ), but there you go.

Schneider may be older, but his contract is reasonable (especially considering the new contracts signed this offseason) and he is still quite effective on the powerplay. He hasn't lost his shot yet.

Pato, perhaps you're right about the no-trade clause. I'll look into it.

Even if that were the case, Boyle's salary still acts like a virtual "no-trade clause", especially when he's three or four years into that deal.

listen, im not saying boyle was the way to go, and i can agree that the market prices for free agents is inflated and so when one evaluates each option as it comes up it looks poor, but not signing anyone and having no players is not really a solution. i mean sure, if you had no players at all you would save the most money, but how are we supposed to win cups and compete then. To me its quickly becoming apparent that Murray's initial popularity was gained on the back of Muckler's efforts...other than resigning players that Muckler got us, what has Murray done as a GM?