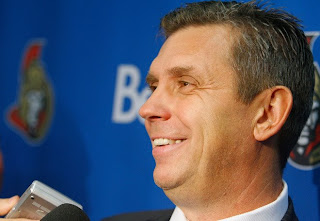 Maybe it will work.

I’m not talking about coach Craig Hartsburg putting the big line back together because that’s going to work every time.

It’s the fact that Hartsburg, without knowing it, has gone back to the same old, same old by trying to force Mike Fisher to again be this team’s second line center.

According to an Ottawa Citizen report from Goteborg, Sweden by Allen Panzeri, the Senators lines to open the season will look like this:

Dean McAmmond is designated as the sitting forward.

After spending much of the summer and training camp claiming he wanted to spread the offense around, Hartsburg has given in to the temptation to put all his aces on one line.

Not only that, he has split up the short-lived but highly effective Fisher – Ruutu – Neil line and spread them throughout the lineup.

He’s went against conventional thinking here (that’s not a bad thing, really) and split up some effective combos that have worked well together in the past, namely Fisher – Neil and Kelly – Vermette.

Personally, I thought that the pre-Monday lines would have gotten at least a game or two during the regular season to gel but Hartsburg obviously saw something during training camp that he didn’t like.

What may even be more puzzling is Hartsburg’s quotes from the Citizen article:

"We need that line to be dominant every night," said Hartsburg. "It has to be good every night."

Everyone knows that being dominant every night is just not going to happen, especially when opposing teams can unleash their best defensive players against just one line when they play the Senators.

Not to say that these lines won’t work. But the thinking in the organization has taken a 180 degree turn since the start of training camp. The mantra was - spread the offense, take the pressure off the big line.

Now Hartsburg is doing the opposite.

Christoph Schubert’s insistence that he should play as a defenseman and not a forward may have come back to bite him in the ass. He’s currently out of the top-6 rotation along with vet Luke Richardson, meaning that Brian Lee and Alex Picard have claimed the last two spots.

If Schubert eased his wishes to be a D-man, would he even make the cut at forward on opening night? Who would you take out to fit Schubert in? Shean Donovan? Cody Bass?

A trade is in the air.

Speaking of trades, the Blackhawks have put Nik Khabibulin on waivers, which may indicate a trade is coming, assuming he clears. I'll go out on a limb here and suggest that it might be worth packaging Martin Gerber and one of those extra forwards or defenseman for this proven Cup winner. He's not exactly elite anymore, but Khabby is a big step up from Gerber and he'd fit under the Senators cap with a minor tweak or two and the loss of Gerber's 3.7 million salary.

That being said, I don't expect anyone to bite on Khabibulin until at least the middle of November, barring a catastrophic injury to a number one goalie around the league. Gerber will probably be given a chance to turn around his reputation, but Damocles Sword is dangling precariously over his head.
Posted by Jeremy Milks at 4:37 PM

So here we are, back where we were last year - all our money and effort is tied up in the big line, yet again. Is Paddock under that mask? No, it the same old problem = the sens don't have any secondary scoring. Yes, Mike Fisher is expected to play the role of a second line center - and why should he earning $6mill this yr - but the problem is Mike is not that guy, on a consistent basis anyway. Mike's a great 3rd line energy impact player, but he's not a second line center - and everyone knows it. Here is hoping i'm wrong, but I believe a big part of our offence this year rests on the development and advancement of Mike Fisher - on a consistent basis.