Does Clouston Break Up Lines For Spezza? 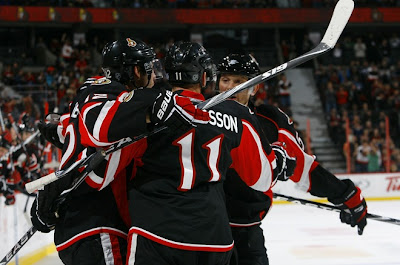 With Jason Spezza a "probable" candidate to return to the lineup for Saturday's home tilt against the powerful Boston Bruins, coach Cory Clouston now has to find a line for him without blowing up the chemistry this still fragile team has going for itself after two straight wins.

Does he really go ahead and reconstruct the original first line with Spezza, Daniel Alfredsson and Milan Michalek, or does he keep Mike Fisher between those two wingers and find room elsewhere?

For a few reasons, Clouston should put Spezza, at first, on a line with Ryan Shannon and Zack Smith (unless Smith gets sent down to Bingo to save cap space right away - in that case Jesse Winchester).

It's not the kind of linemates Spezza should be with full-time going forward but in the short-term it could accomplish three things:

1. It doesn't disrupt the other lines that are working so well at the moment.
2. It will reduce Spezza's minutes at first putting less strain on his injured groin.
3. It will give the Senators an awfully good weapon on a "fourth line" and may allow Spezza to play against the Bruins weaker part of the lineup.

It will be interesting to see what Clouston does.
Posted by Jeremy Milks at 5:50 PM

I hope that they keep the Fisher-Alfie-Michalek line together while it's clicking. No sense it interrupting their rhythm.

That said, I'd start juggling the lines when they start struggling.

We're on our third year now, where everyone plays with everyone, so I don't think that it's a big deal. Everytime a line clicks for a couple of games, Sens Nation gets all excited until the said line struggles and is broken up.

I think the Fisher line has had a couple of good games, so why not see how far they can take it. My own personal view is that Boston is a notch up, defensively and goaltending wise. Wouldn't be surprised if they shut us down and force Clouston to shuffle the lines, later in the game, to get something going.

interesting idea, but i can't see it happening for more than a period, not against such tough competition as boston.. if spezza starts on the 3rd/4th line, boston adapts and snuffs them out pretty quickly.

clouston is not an especially patient coach - i can't imagine him having spezza in the squad, but playing such limited minutes, whether it's the best thing for his health or not..

I would rather see the Regin line altered. Foligno could be removed, Regin can slot in on the left wing, and Spezza can centre with Kovalev on his other wing.

Foligno is the odd man out of the top 6, so to the 4th he goes. If my scenario actually plays out, and Spezza's return is concrete with no more missed games, I could see the Bryan eventually making a move involving Foligno precisely because he is somewhat of a spare part - a top 7 forward that doesn't fit in the top 9 here.

I'm with JP on this.

I would also try Foligno at center again at some point. He seems to have chemistry with Shannon to his right.

Hopefully Clouston reads this on time for today's game! (haha)

I don't think the Spezza-on-the-4th-line scenario is very likely. But I have to admit, I would like to see it happen just for interest sake. I mean, both Smith and Shannon have some hands. Does playing with Spezza actually make that a 1st line? I mean, these huys both have the skill to pop in Spezza's passes. In by books that would be three ok 1st lines plus the Kelly line (which ironically is the best line). It's unorthodox and may not work but you'd think it would give opposing coaches fits.