Senators Can't Get Ahead of Goaltending Story 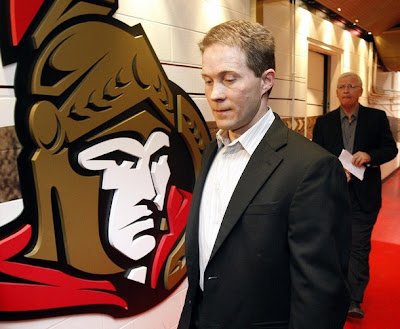 Cory Clouston didn't create the current "goaltending controversy" by any means. So far, he's been handed a couple of lemons but still managed to propel this team into the playoffs last season.

Clouston didn't go out and tell these guys to be maddeningly inconsistent. The goalies only have themselves to blame for the chaos they've created.

How much has Clouston really helped the situation by playing coy over who his starting goaltender will be in the season opener against the Sabres?

Coaches have long enjoyed pulling their little power trips over the media when it comes to naming starting goalies (and injuries and line combinations and just about everything else you can name), but it could be said that Ottawa's particular situation now calls for a firm, clear and rock-solid show of support for Pascal Leclaire, this team's purported number one goalie (for lack of a better term).

If Clouston had come out on Sunday morning and said "Leclaire is our guy going forward. I don't care that he had a rough pre-season. I believe in him, the management believes in him, his teammates believe in him", then at least a damper would have been put on the constant speculation concerning the goalies in the short term. It would have been a story, but not nearly as contentious as it's turned out to be since the end of camp.

In this age, coaches have to be aware of the P.R. side, as distasteful as that may be.

Clouston may think he is exerting control over the situation by playing cat and mouse with the media, but really he is letting the story spiral out of control. Just google Leclaire's name and go to the news section and read the headlines. It's a long list with nearly every reporter pestering Leclaire because Clouston won't spill the beans.

If someone were to say it's not a distraction, they would be lying.

It's entirely plausible that Clouston doesn't want to lock himself in by making a statement like that in case Leclaire truly s**ts the bed and he has to turn to Brian Elliott. But in this case, it's clearly a time for a coach to take on some of that pressure instead of loading it onto both Elliott and Leclaire who constantly get hounded with questions of when they expect to play.

If Leclaire were to bomb, Clouston would have some egg on his face, but sometimes a coach has to take on that responsibility. All signs this summer had pointed to Leclaire being the guy. They brought in Rick Walmsley, his former mentor and he was the last goalie in standing in the playoffs for the Senators after Elliott tanked under pressure. Clouston says the organization has a plan and they are sticking to it.With both Leclaire and Elliott having identical sub-par training camps, it seems strange to think the "official plan" could have been altered based on early performances in meaningless games.

Where's the confidence? Even if you have to fake it, sometimes a coach who goes to bat for a player can make all the difference.

While Leclaire has been weak so far in his career as a Senator, he still needs that one shot he was robbed of when injuries derailed his season last year.

That all being said, I would be shocked if Clouston went with Elliott in game one.  Meanwhile, the goalies are fed to the wolves for a week because he refuses to reveal "the plan".

It all seems so unnecessary.

While it likely won't make much of a difference in the big picture, the sudden turnabout in the Senators plans with David Hale came as a bit of a shock today.

Everybody assumed Hale had made the team, especially when he was scrimmaging with partner Matt Carkner while Brian Lee subbed in as a forward (usually not a positive sign if you're a defenseman).

Then he gets waived today, apparently with intentions to place him in Binghamton.

Why the reversal? Or was this the plan all along? It's understandable GM Bryan Murray doesn't want to pay Lee's one way contract only to have him sit in the press box, but if Hale was a better fit on that defensive pairing than Lee, it still surprises me Murray couldn't make the numbers work, especially such a small amount.

What remains is that this kid has gotten yet another chance, even though he was once again the eighth best defenseman in camp (including Kuba, who is obviously ahead of Lee even if he barely touched the ice).

How many lives does Lee have? He's bigger this year and that might help him. But let's say there's a bit of a stink to this transaction. Hopefully the reporters close to the team can get to the bottom of the story in the next couple of days.

I'd be interested to hear the explanation.
Posted by Jeremy Milks at 8:49 PM

I am prety sure BM never himeself indicated Hale was a lock for a starter position. This was an assumption from the media, because he wasn't among the lastest cuts.

I'm just one fan, but I have no problem with the way Clouston has handled the goaltending situation.

That being said, I agree with your philosophy that showing confidence in a player can make all the difference. Claude Giroux talked about that with Lloyd and York this afternoon.

So, I agree with you ...... but in this particular situation, due to the particular circumstances, I think Clouston's should be given the leeway to trust his gut. After all, he'll be held accountable for the results.

If we were talking about Marty Brodeur, then it's a no brained, you gotta ride him. If we were dealing with a newly anointed #1 like Lehner, you gotta give him a fair chance.

My feeling is that, with Elliott and Leclaire, I don't know who's better. They're both around the same age. They'Ve both shown flashes. I think they're both good goalies who have been inconsistent.

If the Sens were a dominant team of the past, they could afford to ride out a few losses while the goaltender finds his game. If the Sens were a bottom feeder, then ditto, because we wouldn't make the playoffs anyway.

Last year, 11 points separated 5th from 10th place in the conference. Call it five or six games. How many games can we throw away? We're not talking a fourth line roster spot or a third pair D. We're talking a key spot.

Sticking with a goalie too long could cost us a playoff spot. I don't think there's a right answer. I'm just saying that Clouston's position is defensible.

My take on waiving Hale? He would only have to be waived once this season, and once waived (and assuming not claimed) he can be sent back and forth b/w NHL and AHL during the rest of the season. I would imagine that BM does not want Hale to be claimed, and is picking now as the least likely time Hale may be claimed.

Waiver wire is full of players at the moment, so I would guess the thinking would be that this is the best time to have Hale go through waivers, as opposed to sometime later during the season when other teams needs for a defenseman may be more urgent, due to injuries, etc. Once Hale is waived, he could be sent down and then brought up and play with the Sens until Kuba is back.

I agree with your thoughts on Clouston. As you said, even if Clouston has to fake it, he needs to protray to the fans and the media that he has faith in LeClaire. If he did as you suggested and came out with LeClaire is going to be our guy until he proves he can't do the job, then most of the hoopla over the goalie situation would have ended. Part of me does think it's a powertrip with Clouston, he doesn't seem uncomfortable dealing with the media and this is his way of feeling in control.