No Need To Sit Karlsson 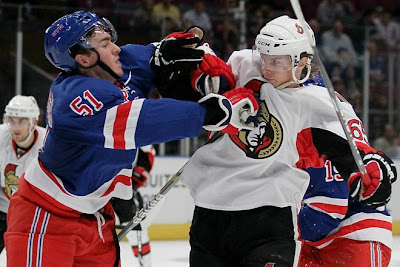 Interesting bit of news after Sens practice on Tuesday when Cory Clouston seemed to imply that sophomore defenseman Erik Karlsson would be sitting out a second straight game as a healthy scratch against the Dallas Stars.

Obviously, Karlsson is being punished for a string of bad play during the last week and a handful of bad penalties, but is it really necessary to make him sit two games in a row?

If Clouston indeed does go ahead and scratches Karlsson, the Senators will once again struggle to create consistent offense. Without Karlsson against the Kings, the Senators had under 20 shots and could barely break out of their end.

If you say it's for the good of Karlsson's development, I don't really buy it. Sure, one game sends the message, but sitting a guy for multiple games when he's obviously one of your most dangerous defenseman just seems like overkill and unnecessary posturing by the coaching staff.

It would seem to imply that the kid "just doesn't get it", yet from all we've heard about this guy, he's a hard worker who respects his coaches and his teammates. For sure, it's going to light a fire under his ass when he returns but we suspect he'll settle down and continue to be one of this team's best players on the blueline, something he would have done if he was made a healthy scratch or not. In the meantime, we play psychological games.

I just didn't see enough offensive opportunities against the Kings to justify Clouston sitting down one of his top weapons for another important home game.

What's the point? I just don't get it.

He's very cocky and arrogant, almost with a sense of entitlement.
Let him sit and ponder he isn't owed a roster spot.

He'll be a better person, and player, because of it and will mature as well.

The previous comment was brought to you by the Curmudgeon Society of Ottawa.

Sent from my rotary dial phone