Senators Stunned Into Silence By Gerber and Oilers 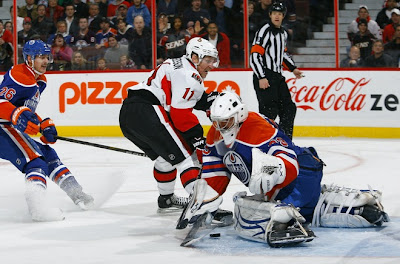 Watching the Edmonton Oilers slowly suffocate the Ottawa offense Monday night made the game feel like a lowpoint in the Senators season for good reason.

It was the middle game, the valley between two peaks, the supposed "gimme game" between the Saturday night special against the Leafs (which Ottawa won) and the Thursday night return date with Dany Heatley and the Sharks that's been marked on calendars across the NHL since the schedule was released.

Reading the papers and watching the blogs, it was like this game meant nothing and was a certain two points in the bag.

Not to Martin Gerber.

The once spurned ex-Senators goalie barely had to do anything (but what he did have to do, he did well) as he watched the young Oilers play a near perfect road game against an Ottawa team that still seems to have no clue how to score goals.

The coaching staff' for the Senators have been shaking up the lines every which way for nearly two weeks now but when they really needed to make a change - late in the game to get something going - Cory Clouston kept sending out trio's who just weren't working well together all game long.

It's a bit strange that Clouston has completely abandoned the Jason Spezza- Alex Kovalev pairing that worked so well for awhile before being split up, and the third period was the time to try them together again.

People will point to all the penalties the Senators took, and the tying goal given up while short-handed, but the real culprit is a lack of cohesion among the lines Clouston has going right now, even after the great game Kovalev, Milan Michalek and Mike Fisher had together on Saturday night.

And it's an extra shame for the Senators because this was a match they should have won with two tougher games ahead against San Jose and Buffalo.

Now, if you can believe it, the Senators have more regulation losses than the Edmonton Oilers. Those same sad sack Oilers who everyone is writing off as a lottery pick.

Now that's a lowpoint no matter how you look at it.

No stars awarded tonight, for the 6th time this season.

....At least it was a good move by the Senators to pick the game against the Oilers to be their first time wearing road whites this season at home, allowing locals to get a look at the nicest non-original-six jersey's in the NHL. Those Oiler throwback's are pretty stellar. Now if only they could switch back to the original white jerseys that Gretzky and company wore and they'd be in business. As it is, the Oilers current road whites are the plainest, dullest, most uninspired sweaters in the league by far. Most other teams practice jerseys are nicer.... I've never been much of a gambler or a guy who plays the lottery, but those 50/50 draws at the rink suck me in every time. I spend most of the game completely believing I've got the winner in my hands and then sit dejectedly for the last half of the 3rd after they announce the numbers. There's a sucker born every minute....

....This Opinion Won't Be Popular Dept.: Fans are going to have their fun booing Dany Heatley and they definitely deserve to vent their frustrations after all this time, but if you really look at things honestly, the guy who did the most damage to the Senators during a similar time span was on the ice tonight for the Oilers, and that would be Martin Gerber. Frankly, John Paddock's little golden goalie was brutal during his time in a Senators uniform and set this franchise back much further than Heatley's trade demand ever did. At least when Heatley was a Senator he helped lead this team to the Stanley Cup final and twice scored 50 goals. Yet it was Gerber who became a minor folk-hero in town during the Ray Emery fiasco because the Swiss goalie apparently was the "nicest guy in the world" and the "hardest working athlete in sports history". And I'm barely exaggerating the remarks that were thrown out in the media about this guy. That golden rep has followed him around ever since. "Luckiest guy in the world" would be more apt. Still, you have to give Gerber credit for fighting his way back to the NHL with the Oilers this year. But let's just say I never have and never will drink the Kool-Aid concerning this guy..... That was a tough summer for former Senators GM John Muckler back in 2006. He lets Zdeno Chara and Dominik Hasek walk and signed Wade Redden and Gerber instead. Even a trip to the Cup final was not enough to save his job after that....

.....Tough to see Jesse Winchester getting a penalty for lightly laying his stick across an Oiler with only one arm in the second period, but that's a call the referees need to keep making. There should be zero tolerance for using your stick on a player who's carrying the puck. I lived through the "dead puck" era where obstruction was king, and I never, ever, ever want to go through that again. Sitting through Stanley Cup final series like the Avalanche-Panthers in 96, Stars-Sabres in 99 and Stars-Devils in 00 was like getting a hockey lobotomy. The game is so much better now, even if the price is a few chintzy penalties here and there that annoy everyone..... There was also an interesting discussion on the Healthy Scratches show on the Team 1200 today, where they discussed how hard it is to get pucks to the net in the modern NHL because everyone is so good at blocking shots and collapsing in front of the net. They re-set Bob Gainey's idea from a few years ago to make going down and blocking shots on the ice an illegal defensive move. Sure, it seems silly at first, but I actually think it makes sense. A lot more pucks are going to get through all those bodies if defenseman are only allowed to do the standing flamingo in front of shots. Combine that rule with even smaller goalie equipment and you may have something that will make a difference. The NHL needs to keep pushing for more offense. The game is better, but there's still a ways to go....Speaking of making the game better, where have all the big hits gone? Was there even one hit thrown in the Oilers-Senators game other than Nick Foligno's in the third that got him a penalty? Players are spooked by the new blindside rule and don't seem to want to commit themselves to any kind of hit anymore, legal or not. It's a sad state of affairs.
Posted by Jeremy Milks at 10:30 PM

Players are scared to make hits because everyone is turning their backs now and diving to get BS calls like the one against Foligno. Boarding? Really? So I guess it's a penalty when you make shoulder to shoulder contact and the player hits the boards?!

But after the couple blatant no calls on Edmonton (tripping and interference), the call maybe should have been another 2 minutes for wearing "the nicest non-original-six jersey's in the NHL". 5 straight calls against, including a few weak ones?

The Foligno call was the icing on the cake. For me it symbolized all that is wrong with the NHL today.

These games are very hard to watch...

Did you forget the Chris Neil open ice hit in the third? I agree though, not too much rough stuff last night at all.

Where was the Carkner/Stortini bout anyhow?

The team looks off.

The ball's in Melnyk's court. It's time for a new GM. Hire Leeder or even Randy Sexton as the interim guy, and look for a permanent guy in the summer.

And, someone please give Phillips his contract. What are we trying to prove here? If you don't want him, trade him and get something.

Oherwise, sign him. I can't believe that the uncertainty is having a positive affect. I bet his game stabilizes as soon as he knows that the team wants him going forward.

Forget about the new GM
Murray's a local guy and Melnyk has shown again and again he cares more about that than winning.

Just stop going to games, that's what I'll be doing. If it goes down to 15,000 or 14,000 per game then Melnyk will stop being a Polyanna and he'll finally put his foot down.

Melnyk has no reason to act otherwise.

We're mediocre, the GM is lost in the cap era and our owner is living in a fantasy world.

Sadly, I think you're right.

stop going to the games? hey, good call, bud - why bother watching if we're not gonna win, right? you deserve sooo much better..

this is the level of arrogance, entitlement and utter shit-for-brains that us ottawa fans have come to be ridiculed across the league for: championing a boycott of your own team because we might not make the playoffs.

No Melnyk, no team.

I'll take 25 years of bottom feeding over a bankrupt team that packs up and moves to Hamilton, any day.

You guys are nuts.

The team's not going anywhere. Ottawa has shown that it's a great market. The NHL would never allow an Ottawa team to move. They would be the laughing stock of the business world.

Customers have every right to express disatisfaction for any product that a seller is trying to sell. It's a business.

And, when the team sucks and the fans express their disatisfaction, it's a business.

Sometimes the only way to get a seller's attention, is to stop buying. Most teams would get the message pretty quick. I think the Sens would as well.

We need a change in management pretty badly. If empty seats is what it takes to get there, then so be it.

Maybe you're young and weren't old enough to understand at the time.... Here are the facts:

Previous owner Rod Bryden went bankrupt. There were no takers. Team was about to vanish. Melnyk stepped in at the 11th hour and SAVED THE TEAM.

NO MELNYK, NO TEAM.

Yes, but the financial circumstances were completely different.

Bryden bought the team by borrowing lots of cash. Even more borrowed money was used to build Scotiabank Place. On top of that, the value of the Canadian dollar was very low.

The reason the team went bankrupt was due to the fact that it was financed with too much debt.

I'm guessing that the rink cost $200M to build.

Because the team was in bankruptcy, Melnyk picked it up on the cheap. He paid $125M for the rink and the team. The team alone was probably worth $100M at the time.

He got a great deal.

Due to bankruptcy rules, the debt was essentially wiped out. All kinds of parties who put up the money to build the rink and the team in Ottawa, never got their money.

Melnyk bought a finished product. Good for him, that's how business works. He took advantage of a great opportunity.

But, the Melnyk 'the saviour' storyline is a little too much. The club, under its current financial structure, is a great investment.