Tough Stretch Ahead For Sens... Plus Contest Winners 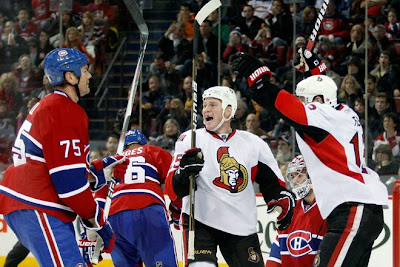 With the Senators on a good run of late, and with the win over Montreal on Saturday seemingly exorcising a few demons, the chatter around the team has been somewhat quiet lately, allowing a lot of the early season controversies to die down to a barely noticeable slow burn.

You can strike the goaltending controversy from the list. Brian Elliott has been more than solid in their recent stretch and Pascal Leclaire is healthy, waiting for his opportunity. No one seems to think that will come anytime soon.

Scratch Alex Kovalev from the problem list, as he is back in form after struggling early on.

Jason Spezza is healthy and contributing. Sergei Gonchar and Erik Karlsson are running the power play with authority and Chris Phillips seems like the old Chris Phillips again.

So what's to talk about after all that?

Well, there's three big tests coming up for the Senators within a week of each other. While the improved Atlanta Thrashers on Tuesday will be a tough opponent, it's the following three games against the Vancouver Canucks, the Boston Bruins and the Philadelphia Flyers that will really show just how good these Senators are.

All three teams have to be considered legitimate contenders for the Stanley Cup this year and the Senators will have to try and beat the Bruins and Flyers on the road. Not an easy task.

If the Senators can win two of their next four games, that could actually be considered a reasonable success, considering the loaded lineups they'll be facing. With any luck, the Senators may have Filip Kuba back at some point during this stretch, but that would also mean that David Hale likely gets pushed out of the lineup. Hale has been a nice addition to this team but at least management knows they have a guy who can play in the NHL and provide quality minutes if they need his services again.

With the way defenseman go down to injury in this league, he may never even make it to back to Bingo in the first place

The ticket contest run yesterday on Black Aces went really well, and the amount of responses I got was surprising. Thanks to everyone who participated even though I didn't have time to respond to everyone who wrote in their answer.

In case you were wondering, it was Petr Schastlivy who was the only player other than Jason Spezza and Alexei Yashin to wear number 19 during the regular season for the Ottawa Senators.

Congratulations to Matt and Andrew who both won a pair of Coca-Cola Zero Zone tickets to the Atlanta game on Tuesday, generously provided by the Ottawa Senators.