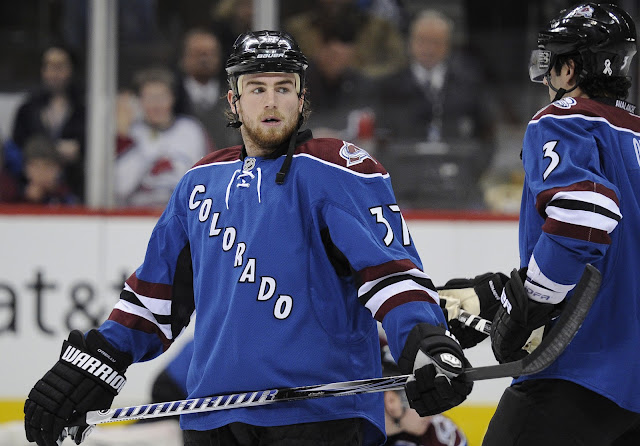 I think it was only a couple of weeks ago in this space that I speculated on why the Senators should be interested in Colorado RFA Ryan O'Reilly. Turns out they might be, according to Bruce Garrioch, and it makes sense. Who wouldn't be interested in O'Reilly? GM's fall all over themselves trying to draft guys with both high-end skill, grit and realistic captaincy aspirations. Not surprisingly, Garrioch says the asking price from Colorado is high. As will be the money O'Reilly will need on a new deal.

But do you actually part with someone like Mika Zibanejad? I pulled that name out of thin air but obviously Ottawa would need to part with at least one of their top prospects, so Zibanejad is worth discussing. In a way, a guy like O'Reilly, 22 years old, would be accelerating Ottawa's partial rebuild a little better than Zibanejad, 19, at this point (Zbad was a healthy scratch against NJ incidentally) because of O'Reilly's modest experience, not to mention stats. The Sens have some prime guys like Jason Spezza, Milan Michalek and Craig Anderson all in the 28-31 years of age range, a few older vets like Daniel Alfredsson and Chris Phillips who need to win NOW and a whole slew of rookies and under-25's who have yet to really make a significant mark in the NHL.

You could call that balance, or you could also call it a case of bad timing. Are the Senators trying to win a Stanley Cup now with Spezza, Anderson, Alfredsson, Michalek and Erik Karlsson (who is magically in his prime at only 22) or are they rebuilding with Jared Cowen, Jakob Silfverberg and Zibanejad et al? It's a bit of a balancing act for GM Bryan Murray who can't afford to waste the prime years of a special player like Spezza while he waits for a bunch of 19 year old's to gain experience (not that he has much choice at this point).

You only have to look at the deal Murray made for Kyle Turris last year (a trade I initially abhorred for the same reason a lot of people would be revolted by the thought of trading Zibanejad). He sends rookie David Rundblad to Phoenix for a guy with some similar experience to O'Reilly (but worse stats) looking for a fresh start. That little jump in age allowed Turris to play a big role immediately and helped propel Ottawa into the playoffs where they came within a few goals of advancing to the second round. Rundblad may still end up being the better player in the long term but the effect Turris had on Ottawa immediately can't be ignored.

I'm not saying Ottawa should definitely part with a prized prospect for O'Reilly, but if they do, the Senators could have a hell of a team next year as long as the injury situation doesn't repeat itself and Craig Anderson remains a rock back there.

Yet whenever someone like O'Reilly is available, you can predict about 29 different journalists from 29 different hockey cities will be writing an article linking the team they cover to the guy on the trade block. There's not one team, including Colorado, that doesn't need someone like O'Reilly. Even Boston, who has a dressing room full of O'Reilly's, would always make room for one more. It would be the same with Mike Richards, Gabriel Landeskog, Scott Hartnell or David Backes.

The chances that O'Reilly actually ends up in Ottawa are slim in part because Colorado will ask for the moon knowing that the Senators are desperate for healthy players and have more high-end prospects than most teams. Murray is a sensible guy. He will balk at anything that could potentially undermine the drafting effort he made since becoming GM in 2007.

NOTE: I'm just back from vacation and still trying to clear out the cobwebs and absorb the mind-destroying news of Erik Karlsson's season ending injury. The posts on Black Aces will pick up as the week goes along and I get my family's 35 suitcases unpacked to my wife's exact specifications.

I've never seen O'Reilly play, I don't know much about him other than his stat line and his salary demands.

Reports say that he wants more money than the $3.5 million that Duchene got. Fair enough.

On the Sens, Turris just signed an extension for $3.5 million. If the Sens are going to pay O'Reilly more than Turris, does that mean that Turris drops to the third line centre role? And if that happens, will his production drop significantly due to the fact that he's playing with bottom 6 guys?

Last year, Foligno was doing pretty good on the second line. When Turris came in, Foligno's production dropped when he stopped getting second line opportunities.

I think acquiring O'Reilly has to be put in the context of what that'll mean for Turris.