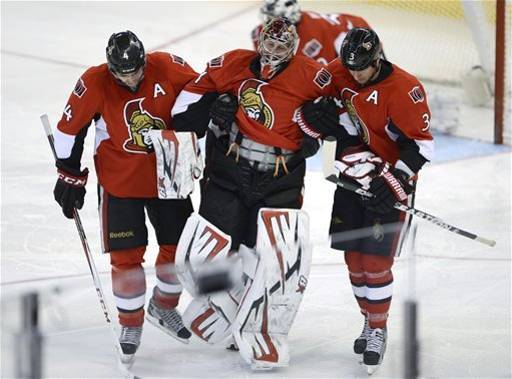 We’ve seen our share of gutsy teams in Ottawa since 1992, the year this team was reborn after an equally gutsy campaign by the expansion forefathers who heard “it can’t be done” more than most of us can remember. The 96-97 team with their little Buddha statues and sticks-in-the-toilet routine are still beloved by those who were there to see it.

The ’98 team who defied the “experts” and upset the heavily favoured New Jersey Devils in the first round were just as memorable. The organization soon morphed into a highly-skilled but Velveeta soft team that couldn’t handle the Maple Leafs when it mattered most, until Brian McGrattan KO’d Tie Domi and cured the existential crisis of thousands of neurotically damaged Ottawa fans.

Then there was last year’s group of kids, picked by most to be the dregs of the Eastern Conference. They somehow made it to the playoffs, but all it took was a never-ending rollercoaster of comeback victories, slumps, streaks, someone named Erik Karlsson, and ultimately, a Game 7 loss to the Rangers in the first round. But it was the most inspiring group of players to wear the Red and Black since the days of Steve Duchesne and Ron Tugnutt. They were more like a gang than a hockey team.

After last night’s strangely emotional win over the Rangers, with Craig Anderson’s year nearly destroyed by an out of control Chris Kreider slamming into his leg, this hobbled and broken team is clearly making the city proud.

You could hear it in the arena as the crowd tried to resurrect a stunned team in the immediate wake of seeing Anderson, their MVP, get carried off the ice on one good leg. You could see it when Ben Bishop dramatically waved off Kreider seconds after the victory was sealed. You could see it on Kaspars Daugavins’ face as he barked his way down the Senators bench after accidentally scoring between Henrik Lundqvist’s legs. The whole team was in genuine hysterics as the Kanata crowd went to gong-show levels. Even Paul Maclean allowed himself a little smirk, knowing his boys were about to “get away with one”.

He knew his team was beaten by a group of guys who simply wanted it more than the Rangers did. He could look down his bench and know that only Ryan Callahan played as hard as Daniel Alfredsson or Zack Smith did in that game. Other clubs will both admire and hate the Senators for nights like this. Everyone loves an underdog and knows that this organization is going through hell with these injuries, but it also makes them bad when their superstars get beaten by a bunch of AHL’ers named Dziurzynski, Gryba and Wiercioch. Who?

It’s strange to see so many headlines about Alfredsson possibly leaving town once the “inevitable” Ray Bourque syndrome comes into effect. What I saw from the captain was complete focus, and after the Jakob Silfverberg and Daugavins goals, a beaming smile, like the kind of smile a Dad would have on his face. I see a guy who loves his role on this team and in this city. I don’t see a guy who will jump ship even if the team starts tumbling down the standings. I know he says “never say never”, but I got my money on the never.

But is this all just a temporary dream... a group of players with their backs to the wall giving their one last defiant push before reality sets in? Maybe.

I have to admit I thought it was over when Marc Methot tried to help Anderson up off the ice and the goalie collapsed like he was Mike Modano getting tipped over in a stretcher back in the 90’s (remember that?). Even before Anderson, I, like everyone else, thought the season was over after arriving at the Toronto airport from a week in Cuba without internet only to be greeted by a giant television screen showing me Karlsson’s Achilles tendon being severed over and over again. People brushed past me oblivious as I stared at that screen, my carry-on barely dangling from my fingers and my new tan draining back to white.

Yet these guys just keep at it, chipping away a period at a time. This is a case of stats not being able to tell you the whole story. It’s the intangibles - that near-mythic entity that modern hockey writers all too often spurn for cold hard numbers - that you have to follow if this team, this season, is to make any sense at all.

I don’t pretend to know how this team wins games anymore. I just enjoy watching it.

And I’m betting you do too if you’ve come here to read this.
Posted by Jeremy Milks at 10:46 AM

All I can say is great article, calling this situation surreal is spot on. The Senators are simply our miracle on ice this year.

Last year was a team that was looked down on but remained healthy, found an identity, and had some career years from some of their best players.

This year it is a group battling against adversity, fighting for every inch of ground. It is like trench warfare.

I was at the game last night, I expected the team to break but all they did was bend and whip back with more force then before. The emotion in the players and the fans was electric, I almost feel like that was Game 8 of the playoffs last season.

I too love watching a young, energetic team like this come together through adversity with some solid veteran leadership.