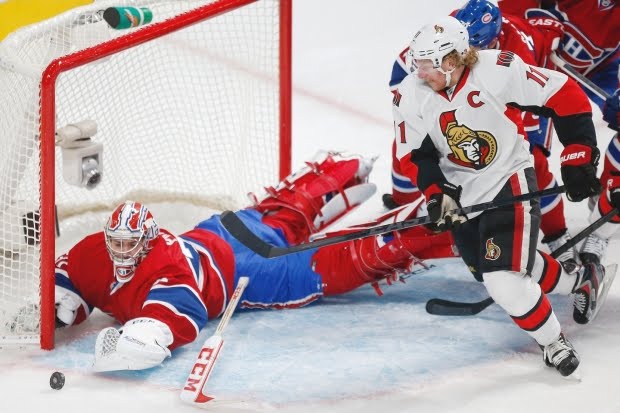 What would Ottawa give up for a chance to trade for Ryan O’Reilly? No one is even suggesting Ottawa is considering such a deal, nor Colorado who seem intent on playing hardball with the RFA as Montreal did with P.K. Subban, but if he does become available he’s the type of player Murray would love to have here. Most GM’s would feel the same way. Would you deal Mark Stone as part of that package? Most fans would instinctively scream “Nooooo” because parting with prospects and draft picks is seen as treason nowadays, but Murray had a lot of success with Kyle Turris, a player who was locked in a philosophical or personality clash with his previous coach in Phoenix, Dave Tippett. Not much difference with O’Reilly except that it’s over money this time..... Tough to see Peter Regin struggling to create offense when he knows this may be the biggest opportunity of his career with Jason Spezza out. In the last two games he’s looked timid and frustrated, even pedestrian. Stats aren’t everything, but his are downright ugly. 9 games, 0 points and 41% in the faceoff circle. He does have 15 shots, good for 8th on the team but then you look at guys like Chris Neil (23 shots) and Erik Condra (20 shots) and wonder why Regin doesn’t have more. He had a chance to shoot on a 2-on-1 against Montreal on Sunday but forced a pass back across the ice which was picked off. You could feel his confidence derailing into the side of a building on that play. Time for a change on that second line? Maybe Stephane Da Costa gets a chance in that spot, but it’s not clear where he’ll play until Maclean addresses the media about it. My guess is Regin gets a little more time.... On the positive side, even after 2 losses in a row, Daniel Alfredsson is looking better. It might have been his best game against Montreal on Sunday and he was all over the puck. Takes a while to get those old bones warm, but once he’s at the level he can get to, expect some goals to come on the powerplay....

..... It seems a shame that in order for Guillaume Latendresse to get back in the lineup it will likely mean Kaspars Daugavins sits. There’s just something about the energy Daugavins brings on that fourth line which makes you want to see him play most nights, but that’s not going to happen..... Cam Ward is killing me in my hockey pool. Every year I pick a dependable goalie and every year that goalie falls apart in the first few months, putting me miles behind the pack. Last year it was Ryan Miller. Why didn’t I pick Luongo?..... Timing is everything and it’s unfortunate for Ottawa that Spezza’s injury and Jakob Silfverberg’s growing confidence are intersecting. The two struggled a little playing with each other for the first time but it would have been interesting to see if the chemistry started growing once Silfverberg got more comfortable, which seems to be happening now. The team can’t score but Silfverberg looks like he’s starting to get a feel for the games and would have figured in on two Ottawa goals on Sunday if it weren’t for the worst blown call of the year. The league is erring too far on the side of caution and it’s screwing with the brains of the refs. The spirit of the goalie interference penalty is to protect them from forwards crashing the net as a tactic for goal scoring and causing severe injuries like Grant Fuhr suffered when Nick Kypreos bowled him over on purpose in the 90’s. It’s not there to call off goals on minor technicalities such as a slight bump, and especially not to allow Carey Price to skate out of his crease, bump a forward like Silfverberg and have a perfectly good goal disallowed. We’re getting into soccer and basketball territory here and it’s downright sickening to watch. This is not just an isolated blown call. This is the mindset of a league that’s been bullied by whining goalies like Ryan Miller and battered by the press for violence and as a result we see ref’s blowing their whistle at almost anything. You’ll see it more this season and Ottawa won’t be the only team victimized by it....

.... Gotta admit, I had some real doubts about Montreal. Rookie GM, bringing back Michel Therrien and playing hardball with P.K. Subban. So far it’s all worked out and they look like a different team. They’re tough, they can skate with anybody and their goalie might be the best in the league. They look like a playoff team to me..... This lack of scoring and Spezza’s injury are doing a pretty good job of masking Ottawa’s real need, which is still on defense. Patrick Wiercioch, Andre Benoit and Mark Borowiecki have done a decent job back there but on most nights they’re just surviving, although I think Benoit has been the best of the bunch. When Sergei Gonchar went down with the flu, you could see the strain on the pairings which resulted in Erik Karlsson trying to do a little too much and the power-play looking noticeably weaker. And I don’t think Paul Maclean really feels Borowiecki in particular is ready to be a regular, by yanking him in and out of the lineup. This team would look much better with one more veteran back there and Mike Lundin doesn’t strike anyone as the solution, although it’s wrong to write off a player who hasn’t even tied his skates yet. Kurtis Foster would have been a nice addition to this team when he was available but that ship has sailed. Mark Eaton anyone? It’s not as if there’s a whole swath of veteran defenseman available for Bryan Murray to pick up, but there were a few immediately after the lockout. There’s no panic now, but that can change rather quickly.
Posted by Jeremy Milks at 10:52 AM

It was pretty painful to see Regin make that pass back on the 2-on-1. Frankly stunning that a guy who's hurting for goals doesn't pull the trigger there.

He's been called the Danish Gretzky... But I never knew Wayner to be so gun-shy. Very frustrating to see Regin so passive on O opportunities. Great call on O'Reilly, btw. I second that motion.

Great to come back and read some nicely wrote articles :)
keep it up Milks