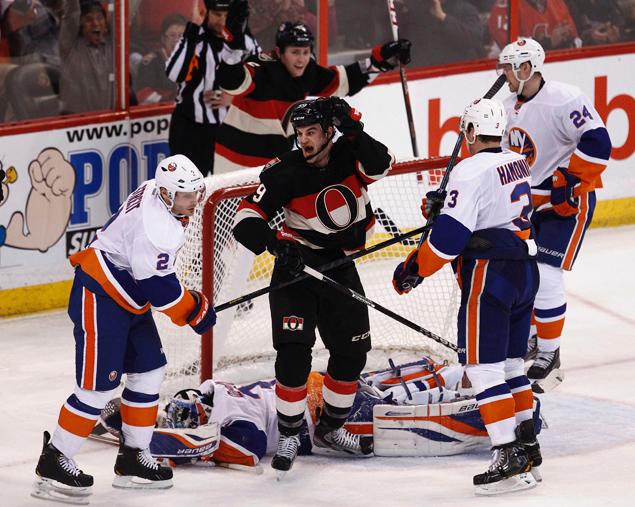 A Senator who’s definitely growing on me – Patrick Wiercioch. I thought his last two games against the Devils and Islanders were the best I’ve seen him play all season. The guy wanted the puck and made plays out of his own end with some confidence. I don’t know exactly what it is, but I’ve sort of flip-flopped on him since his early start where I thought he was weaker than Andre Benoit and Mark Borowiecki. Maybe it’s his size that gives him a little more presence but I like him the most out of those three to have an impact the rest of the way. But then you have to look at Eric Gryba who played almost four more minutes than Wiercioch on Tuesday against the Islanders and had five blocked shots. It’s good news/bad news for the organization because if Erik Karlsson and Jared Cowen weren’t hurt, we might not have even seen these guys play a single game so far, but next season this blueline is going to be both skilled and tough – and hopefully healthy....

.... You have to think that GM Bryan Murray wishes he had played the safe hand and made a move for a veteran defenseman at the start of the season when Jared Cowen went down. There were questions about inexperience even then but Murray gambled a little bit without insurance and is now dealing from a position of weakness. If, God forbid, another Senator d-man went down in the next week or two, what the hell is he going to do at that point? Mike Lundin doesn’t look any better than Wiercioch or Benoit and there’s a long grind of games ahead of this banged up team. A minor deal to bring in a guy with over 200 games experience could help this blueline survive the next two months and just possibly hold onto a playoff spot (don’t laugh – it could happen). Nobody’s going to replace Karlsson but if they’re going with a “grind it out” philosophy the rest of the way, they’ll need more bodies back there. Sergei Gonchar is getting hammered every night along the boards (he's a definite target with Karlsson out) and if you lose him, say goodbye to whatever shred of hope this team has left. You can’t do anything about bad luck but enough is enough. Make a deal....

... Whatever happened to Guillaume Latendresse? Nobody even mentions him anymore. People will talk about Ottawa’s injuries and don’t say his name. He’s a ghost right now..... How is it that Colin Greening has 0 penalty minutes so far this season? For a guy his size to have 0 PIM’s makes you understand why the Senators coaching staff need him to get more involved. If you’re doing things right, you’re going to take a few unavoidable penalty minutes along the way. Not surprisingly, after being a healthy scratch a few games ago, Greening looks motivated of late and against the Islanders had 5 hits and a goal. The last time he had as many hits in a game was also the last time he scored a goal – January 27th vs Pittsburgh where he collected 6 hits. In 10 of his 16 games, Greening has been credited with 2 hits or less. This guy didn’t become known as one of the most fanatical workout machines on the team just to be a perimeter player trying not to make mistakes. He needs to string together some good games real soon.... Dave Dziurzynski, who got his first career goal against the Islanders on Tuesday, is wearing #59, not the most glamorous number. The only other Senator to use it was Erich Goldmann, who played in a single NHL game in the 99-00 season and was drafted out of Germany by Ottawa in 1996.... Speaking of German born ex-Senators, good ol’ Christoph Schubert is in the German league playing for the Hamburg Freezers. Schubert was +30 for Ottawa in 06-07. The guy could hit like a train too....

.... The skinhead look has been somewhat rare in the Senators short history, but Andre Benoit and Craig Anderson are doing their part. Hey, Mark Messier, the most famous cueball in NHL history, is my favourite player of all-time so I’m not looking for a cheap joke here. But off the top of my head I can only come up with a handful from Ottawa’s past. Bryan Smolinski and Alex Auld come to mind right away. Actually, that’s all I can remember. I want to say Denny Lambert but I think he might have had hair when he was in Ottawa. Can you think of anyone else?.... On the other side, Daniel Alfredsson is doing a pretty good lion impression lately and Zack Smith and Karlsson can grow it too. But it’s tough to top the early 90’s Senators when they had Mike Peluso, Darcy Loewen and Dave Archibald among others following the dignified lead of Dougie Gilmour, Brett Hull and Jaromir Jagr.... Tough day for Lindy Ruff. Everyone knows this guy is a hell of a coach and the crap he had to endure in Buffalo with players leaving, ownership changing and bad signings would have destroyed a lesser man. Only a coach like Barry Trotz has a comparable record of keeping afloat bad teams over a similar period. Ruff’s greatest moment in Buffalo might have been the summer of 1999 at a team rally after the tough loss to Hull and the Dallas Stars when he concluded his speech with the two words “No Goal”. He was a hero after that. Now he’s the scapegoat. I’m usually not one to cry over coaches getting fired. In fact, I get annoyed when most pundits go immediately to the “it’s the player’s fault, not the coach” line. Sometimes it’s true, sometimes it’s not. I think Bryan Murray was right to fire all three of John Paddock, Craig Hartsburg and Cory Clouston. But in Ruff’s case it does feel weak. If Jarmo Kekäläinen is looking to start fresh with a new coach next year in Columbus, he’d be crazy not to go after Ruff.
Posted by Jeremy Milks at 12:56 PM

Paddock's winning percentage was over .600. He was the head coach at the All-Star game, a month before getting canned.

The Sens were in second place in the conference, when he got fired. I don't think they've been that high since.

He definitely gets a bad rap, based on the evidence.

I think the truth is that he was a hold over from the previous regime, and once the team slumped, it was a good time to get rid of him.