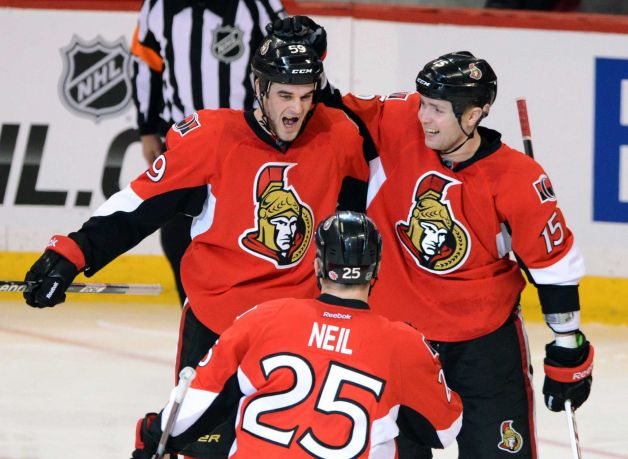 Another game the Senators should have lost on paper and another game Ottawa managed to steal two points from. Unbelievable. I was sure the Canadiens were going to halt the Sens four game win streak on Monday night but every time I think this Ottawa team is due for a letdown, they grind another one out and leave the fans celebrating on their way back to a parking lot of frozen cars. And while they get a goaltending hero every night – this time it was Ben Bishop with 44 saves – one of the unheralded players always seems to come through. On Saturday against the Leafs it was the struggling Colin Greening. Last night it was Peter Regin in the shootout who left Carey Price on his back, wildly swinging for a puck that was already behind him. He also clanged the post just before overtime ended. And before that it was Dave Dziurzynski stunning everyone in the building, including Price, by putting a laser beam into the Montreal net without a deflection or anyone screening the Montreal goalie. It was old-school hockey, coming down the wing and burying one. Dziurzynski is a complete surprise. He’s big, he’s fast, he had 7 hits in one game against the Rangers last week, and now he has 2 goals in just 6 games. He looks like an NHL hockey player despite not having any kind of pedigree. He kind of reminds me of a smaller Brian Boyle or one of those horses from the WHL who end up in places like Anaheim or Dallas. I really wonder what happens if he keeps playing this well and the Senators get some forwards back from injury. It would be tough to send this guy down, but you also don’t want to take out Kaspars Daugavins, who seems to be the player’s very own team mascot. It’s easy to see how much the rest of the players love the guy. When you get Sergei Gonchar laughing on the bench, you know you must have some kind of charm going for you. They lost some character with Zenon Konopka and Matt Carkner but Daugavins is pretty good on his own. The barking after a goal might be the best secret celebration the rest of the league hasn’t caught on to yet. Maybe that’s because he doesn’t get to do it very often....

..... Forgive me another Mark Messier story, but when you talk about a guy getting a bench going, you have to talk about this one. In the late Peter Gzowski’s 1982 book “The Game Of Our Lives”, which follows the young Edmonton Oilers around for the entirety of the 80-81 season, he tells a story about Messier sitting on the bench and starting his own chant, “Here we go Oilers, here we go”, over and over again, until the rest of the team started in with him. Now imagine an entire Oilers bench, in the middle of a National Hockey League game, chanting “Here we go Oilers, here we go...” like they were a bunch of beer guzzling, Canadian-tuxedo clad fans in the nosebleeds. That story still blows me away. I can’t exactly imagine Jonathan Toews or Sidney Crosby doing that, but you never know nowadays with the Harlem Shake craze taking over sports....

..... 2 points in the last 9 games for Kyle Turris is a tough stat to carry around, especially when you haven’t scored a goal since January 25th against Tampa Bay, a stretch of 16 games. There’s no problem with his skating or his hustle (nobody seems to be trying harder than Turris out there) but he’s finding life hard in the Jason Spezza role, as anyone would. I’m not saying he needs a “reset” like Greening had, but maybe a game on the second or third line to get away from the other team’s best defensemen would allow him a little more room out there. Seems like all he needs is one to go in, and maybe a change of linemates would do that for him. Paul Maclean always has the option of Regin in the middle if he wants to shake up Turris a little.... With that being said, who needs to shake up a team on a 5 game win streak? But they were badly outplayed by Montreal and eventually that will catch up to them. They need Turris to create offense. Not like I needed to tell you that.... There was a little bit of handwringing over Chris Neil’s penalty late in the second period which led to Andrei Markov’s tying goal. Not a great call by the ref’s but some fans gave it to Neil anyways. How quickly they forget he made the beauty cross-ice feed to Dziurzynski for the Sens first goal. Neil is always going to take penalties because he has to play that way. The ref’s are always watching him and make reputation calls all the time. He more than makes up for any bad penalties with the work he does the rest of the game. He was credited with 8 hits last night, twice the amount of anyone on either team. He’s having another great year....

..... Again, Jakob Silfverberg’s shot continues to amaze fans and horrify goaltenders. Smart move by Maclean to get him out first in the shootout. Price actually got his glove up in time but the shot was so hard and fast that the puck just barrelled over it. Maybe it was me but I thought Price looked a little spooked out by that. I know he’s a different type of player, but doesn’t watching Silfverberg remind you of when guys like Marian Hossa, Erik Karlsson and Martin Havlat started out in Ottawa? You would get these little glimpses of scary, scary skill from game to game and watch them slowly put it all together. That’s exactly what it’s like with Silver right now. It’s frightening to think of a power-play with Karlsson, Silfverberg and Mika Zibanejad a few years from now. Hell, maybe even Alfie will still be out there, still playing keep-away on the half boards.
Posted by Jeremy Milks at 11:42 AM

Silf was a killer on open ice. The NHL rink size and the clutter of cluch grab and block is still a little too much for him but he will adjust to that in time. He's like Hossa, Ziba is like Havlat especially when it comes to puck possesion. He's still 19 remember.

Leafs are going to have a tough time with two Detroit-style puck possession teams in their division.

Silf can't deal with the tight checking at the moment. It's great that he scores when no one else is on the ice, but we need him to score a 5 v 5 too, and he seems unable or unwilling to do so.

Leafs should be fine, they have alot of speed from their forwaards and are second in ROW wins in the East. I'm more worried about our own team and "I'll score 30" Turris not living up to his promises...