Raptors Using Alfie To Get Fans Riled Up 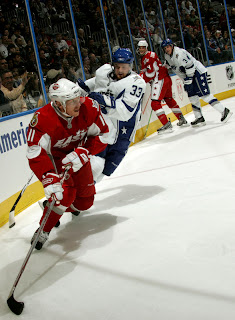 According to a member of the Sportsnet forums, the Toronto Raptors of the NBA use a picture of Daniel Alfredsson on the big screen in order to get fans booing at appropriate times, such as when the opposition is shooting a free-throw.

That’s freaking hilarious if it’s true and I’m wondering if anyone reading this can confirm that.

Apparently they doctor up the photo to make him look like Krusty the Clown but again, I’m not sure if that’s true or not.

I could see the Leafs doing that, but the Raptors???? It’s not even the same freaking sport. Can they not find a photo of Vince Carter and put his head on a baby in a crib or something?

Anyways, I thought some of you might find that amusing, true or not.

I kind of stuck my neck out defending the All-Star game (actually Ian Mendes said much the same thing this morning on the Team 1200 by noting that adults are too jaded and cynical to enjoy the game anymore but the kids still like it and that’s probably the point.) but it’s hard to defend the abomination that was the Skills Contest.

First off, the skating race comp was absolutely brutal. They couldn’t figure out how to properly time these guys and thus the slowest skater, Brian Campbell, had to skate in the final and embarrass himself one more time.

I had no idea what the hell was going on in the relay comp. Neither did the players. It was utter crap and probably planned by a league-hired cretin.

The “dunk” competition, the one that was judged, was a little embarrassing to watch. Alex Ovechkin was the only one who really tried something and even he failed miserably as he couldn’t hit the puck out of the air. Nobody knows what the hell Martin St. Louis was doing and Ilya Kovalchuk going down on his knees and putting a weak shot into the goalies chest was a letdown for his adoring hometown fans.

I’m not saying scrap it, because it was a great idea, but the players have to step up and bring something unique – that actually works!

And what the hell was Evgeni Nabokov thinking? The player coming down (I think it was St. Louis) was trying to pull something great out of his ass and Nabokov comes out and poke checks him.

Are you serious? Way to make the show about you Nabby. Like we all tuned in to a see an exciting poke check from another monstrously padded goalie. Honestly, just leave the goalies at home next time and hire some ringers from the local beer league.
Posted by Jeremy Milks at 10:42 AM

I saw a good bit with Steven Stamkos displaying some of the moves we were supposed to see at the "skills" competition. Apparently Ovechkin was the only one who got the memo.

And yeah, wtf Nabokov?? The goaltending needs to be addressed for this event in future.

I was watching the 1st period at the neighbours and his two boys (9 and 11) were pumped up about it.

I forgot that it was exciting at one time for me too.

Honestly, just leave the goalies at home next time and hire some ringers from the local beer league.

That's not a bad idea actually. If they want to grow the game locally in those markets that's what they should have done. The AHL All-Stars have local junior minor leaguers participate in the skills competition, and why not?

Don, I remember really liking the All-Star game as a kid and my old man made sure it was a special night for me. I'm positive that, like you said, kids still get pumped up for the game and that's probably reason enough for leaving it alone. It's also traditional and there's something to be said for that.

Sherry, I heard about that idea for ringer goalies from some columnist I can't remember now. It would also be quite the thrill for a couple of young guys and girls to get a chance to try and stop an NHLer. In fact, it would make a good story for papers as well.