Senators Should Trade For Rob Blake 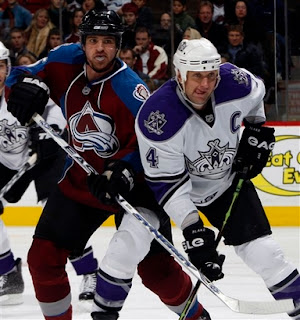 Everybody in the nation’s capital is spouting the buzzwords “top-six forward”, including GM Bryan Murray, coach John Paddock and just about every media pundit imaginable. The conventional wisdom is that if Ottawa nabs one of those elusive top six guys, all their shortcomings will be answered and the march to Stanley Cup in June can proceed without delay.
I’m not convinced. Not about whether Ottawa needs another good forward, but about whether that’s all the team needs.

Three of Ottawa’s six defenseman are considered soft, offensive type players. That would be Wade Redden, Andre Meszaros (not physically soft but soft in the decision making department) and Joe Corvo. It’s certainly an even balance with three rugged D-men in Chris Phillips, surprising veteran Luke Richardson and Volchenkov. But what if you could convert one of those soft offensive guys into a tough offensive guy with a Stanley Cup ring already on his finger?

The best solution out there is L.A. Kings defenseman Rob Blake. He has already publicly declared that he will waive his no-trade clause if the team asks him to. Inevitably they will because L.A. is going nowhere this season and it just makes sense that they would move Blake. But what would L.A. need from Ottawa to make a deal possible?

Would they take back Joe Corvo? Not likely. They were the ones who wouldn’t spend the amount of cash on him that Ottawa did in the first place. On the other hand, former Senator Tom Preissing hasn’t exactly been effective in L.A. and neither has Brad Stuart. Jaroslav Modry’s career is coming to a quiet end so Corvo would actually serve a purpose for them. But that deal still seems unlikely.

Wade Redden isn’t going anywhere and Andre Meszaros is way too promising and integral to the team to move for a rental player.

That means that in order to get Blake, the Senators would have to move either Patrick Eaves, a prospect or a high draft pick. Once you remove those, what do you have left to deal for a quality forward that the team needs?

It’s a tough predicament. Maybe you look at Anaheim and try to copy their success. They loaded up on tough, skilled defenseman and won a Stanley Cup with fewer elite forwards than Ottawa has right now.

Players like Rob Blake are very scarce. He can still deliver a crushing hip check and run a power play in the same shift. He would be the kind of leader that Ottawa has never traded for at the deadline, even though John Muckler desperately tried to get Gary Roberts last season.

He might even be the perfect partner for Wade Redden, allowing Paddock to use Meszaros on the third pairing.

That alone might be worth two or three “top-six forwards”.
Posted by Jeremy Milks at 9:17 AM

I've been thinking the same thing for weeks.

Our D-corps is definitely in a predicament. I think the goalies are getting most of the heat, but the blame for it has to lie with the defense.

Facts:
1. You can't break up Phillips - Volchenkov. Period.
2. Redden - Meszaros make me nervous. Very nervous. I'd love to see them broken up, but we don't have the pieces right now to do so.
3. Corvo - Richardson (spare parts). I like this pairing, and Richardson has been a pleasant surprise. However, there is no spot for Corvo (who has second pairing talent) and his salary on this team. I love the guy, but he is the most expendable. He is only making $2.5M per, which is quite affordable for teams looking for puck moving defensemen.

Bringing in Blake for Corvo (and a pick?) would look like this:

What do you think of moving Corvo to forward and Schubert to D?

Corvo would make an affordable top six forward, and I think he's got the skillset and size to be a good fit.

PS, we'd still have the salary room to sign CuJo for now and move either Gerbs or Emery at our leisure. It puts us in a position of strength from which to deal.

Never thought of moving Corvo to forward. That's somewhat intriguing. He definitely has the speed but his shot is more suited to the blueline. We're seeing D-men converting to forward more and more these days so it's not out of the realm of possibility.

I also think the team should keep Emery. It's almost a no-brainer.

I've found Corvo (5G 15A +18) a bigger surprise than Richardson (1G 4A +2). Not that we can move Richardson anywhere but the pressbox, but I'd rather see:

Not sure I'd get rid of Eaves for him unless one of our goalies goes for a forward or two to replace him. I'd rather give up one of our prospects, Nikulin or Zubov, and a pick (considering Blake is highly paid and likely back to LA next year).

Tha said, Blake hasn't had a great couple of years in LA.