When Will The Media Turn On Paddock? 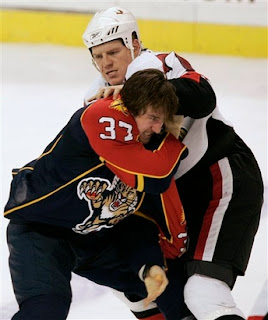 With the Ottawa Senators mired in their second mind blowing slump of the year, the media in Bytown have been noticeably easy on first year head coach John Paddock. Maybe it’s still the honeymoon phase or maybe Paddock has been supplying too many easy quotes on how terrible his players have been, especially the goaltending of Ray Emery and Martin Gerber.

But how long will Paddock get a free ride from the likes of Bruce Garrioch, Wayne Scanlan, Allan Panzeri, Chris Stevenson and Don Brennan?

Of course, the players have a lot to answer for and ultimately it’s their job to get it done on the ice. But don’t forget that this team is largely the same that went to the Cup final in convincing fashion just last year under current GM Bryan Murray (a coach who captain Daniel Alfredsson said he didn’t want to see give up his duties).

Have these same players all of a sudden lost their ability? Obviously not.

Then perhaps there should be some heat put on Paddock who has made some questionable choices in how he employs his lineup. So far, he has managed to alienate his two goalies who were both playing great hockey just last season. Emery lost his job because he had off-season wrist surgery and under Paddock he has not been given any games in a row to get his confidence back. Gerber has been what he’s always been – streaky. Sometimes he looks like a worldbeater, sometimes he looks like the original Swiss Miss Hardy Astrom. Paddock hasn’t shown any sustained confidence in him either.

The defense core is exactly the same minus Tom Preissing yet they look lost this year. The top line has predictably been dominant yet Paddock has not found a way, or the ice time, to cultivate success from his other three lines. The penalty killing is still good but that’s largely the responsibility of assistant coach Greg Carvel.

Then there is the issue of heart. Under Murray, the Senators were tough and nobody was able to push them around, a revelation that the media and fans seemed to appreciate after a decade of soft teams that often withered under the aggressive tactics of teams like the Toronto Maple Leafs in the playoffs.

Under Paddock, the Senators went into their game against the Philadelphia Flyers and had their first opportunity to do something about Steve Downie’s head shot against Dean McAmmond. When nothing happened, Paddock didn’t seem to care and neither did his players. Yet the fans and even the Flyers themselves were shocked that the Senators didn’t even bother to show up. Scott Hartnell went on Ottawa radio two days later and said he was surprised the Senators didn’t try to exact at revenge. For some reason, Chris Neil thought it was appropriate to fight Tanner Glass last night in Florida but not Steve Downie on Sunday.

So when does Paddock get in the cross hairs of the media? Just take a cursory glance at all the usual places that Sens fans congregate to vent, such as forums and blogs, and you’ll see that many of them are already screaming for Paddock to be thrown into the Canal or put on the next bus back to Winnipeg or Binghamton. Yet there’s not a peep about Paddock and his style in the morning papers.

There is a sentiment in the grassroots out there that Murray should step back in to guide this team into the playoffs. Perhaps that’s too radical a concept for the media to consider but at some point, something’s gotta break here.

Paddock can only throw his players under the bus so often (and it’s getting tiring to listen to it) before they start to turn on him. It seems he’s created a two-class system on the team. There’s the top line which gets praised at every opportunity and then there’s the rest of the team who get called out almost every day, win or lose.

Some may find his “candour” refreshing. Others find it suspicious.
Posted by Jeremy Milks at 9:17 AM

The A-Channel crew a couple losses ago went as far as to ask "Is this team overcoached?" but I have to agree, everyone seems to be scared of losing access to the team or something, because no one is taking Paddock on.

I didn't have confidence in him when he was with the Jets and with moustache, and he hasn't earned any yet in six months of coaching.

Murray should take control. Carvel can be a top contender for head coach at the end of the season. We should offer Paul Maurice a chance to escape the TO pressure cooker, as well.

Paul Maurice! No thanks!

I think we have to give Paddock the chance to coach this team in the playoffs.

Brother, you are preaching to the converted.