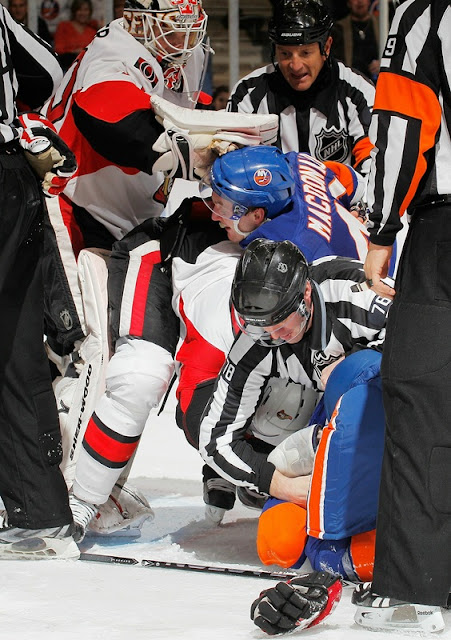 While it may not have been popular with HNIC commentator Greg Millen who called it a "careless penalty", I absolutely loved that Robin Lehner took an unexpected shot at Islanders goalie Kevin Poulin at the end of the second period, knocking him down to the ice as the two goalies skated by each other on their way to the locker room.

Critics will point to the fact that the winning goal was scored on the ensuing two-man advantage power-play, but the Incredible Shrinking Goalie Brian Elliott was much more complicit in the losing of this game than Lehner was (not to mention a complete lack of coverage in front of the net by the defense tonight).

Yes, the Senators lost again (who's keeping count anymore?) but the unexpected swagger that Lehner showed in this game after he came on in relief of Elliott made you realize how meek this team has been all season by contrast. He made 23 saves, many of them big, including a few with a lightning quick leg pad, but most importantly, he wanted to win more than any other Senator on the ice.

This kid has got a nasty streak. Big time.

He didn't hesitate to get into a scrum in the second period and it even looked as though he and Poulin were going to scrap but the Islanders goalie understandably backed off at the last second. With Rick Dipietro already getting crushed in a fight this week, it was not the time for Poulin to get injured too. And if he would have tangled with Lehner, here's betting he would have been.

Known for his intensity, it looked like Lehner was disappointed that Poulin backed off and he let him know by giving him a surprise shove after the 2nd period horn and got a penalty for it. He almost survived the 2 man disadvantage with some big stops but one got by him and he'll take the statistical loss while Elliott gets an unfair no-decision.

But you have to love the swagger. Swagger is something this team desperately lacks. They used to have a goalie like that in Ray Emery but now the only players who have that edge are Chris Neil and Matt Carkner. The Isles were so unintimidated by this meek group of Sens that Robbie Schremp decided to "bag" Brian Lee with his glove in front of the net and skate away, knowing that nothing was going to happen to him.

What's clear is that the Senators have a goalie. Whether Cory Clouston decides to use him for the balance of the season is another question, but Lehner already looks ten times as big as Elliott, ten times as competitive as Elliott, and someone who can actually make big saves at crucial points in the game despite playing behind the softest defense core in the NHL, and probably in the Senators history.

Clouston already went on the record this week saying that Lehner playing is not the ideal situation, but with the utter collapse of his pet player Elliott this season, Clouston is quickly running out of reasons to keep Lehner out of the net.

Then again, the Senators have long run out of reasons to keep Clouston employed while the team completely falls apart in an embarrassing and potentially damaging fashion.

Stop to think about it rationally for a moment.

This team just lost their 9th game in a row, this time to the New York Islanders. They've won only 1 of their last 16 games.

And yet the team, maddeningly, remains status quo. It's getting to the point that it looks like they are tanking on purpose now just by their complete inaction.

It's only going to get worse out west on the upcoming road trip.

Even just on humanitarian grounds, how is it that Clouston is still behind the bench?  This season is not only ruining the Senators for the foreseeable future, it's ending the career of Clouston as a professional.

I find it completely unbelievable that either Greg Carvel or Rick Walmsley haven't been given a shot to finish out the season here.
Posted by Jeremy Milks at 10:11 PM

Right on! I'm fully on the Lehner band wagon - my new favourite Sen!

Lehner was awesome doing that.
None of the core players have any swagger, they're all nice, meek, obliging, friendly guys. Emery was the last guy with swagger in this town and I hope Lehner keeps playing and keeps hating to lose.

As for Wamsley or Carvel as head coach, please no. Carvel can barely run a powerplay and he's going to run breakout patters 5 on 5, manage goaltenders or so on? And Wamsley is a goatending coach...

Of course we're tanking Jeremy, we tanked before to get Daigle, we're tanking now for another top pick. No shame in that, exploiting systems is what true hardcore gamers or athletes do to win.

Lehner wasn't awsome he was immature and stupid. In the big leagues you have to control your emotions. Yes, you want passion but not uncontrolled.

As for Clouston wanting or not wanting to use Lehner do you really think it's just his decision? Since it obvisous he won't be here, I betting a number of other people in the organization have a say how this "future savior" is handled.

As for Carvel & Walmsely both should of been fired already. What has Walmsely done for our goaltending, he was brought in because LeClaire liked him but he's ruined Elliot, the only healthy one. Carvel, he just done so wonderfully with the defense this season I mean why not turn the team over to him, can't get any lower.

- Low, the former Ottawa Senators coach, is pulling for Emery to get signed by some NHL team as an insurance policy (the Flyers and Ducks are the front-runners). “I had Eli Wilson (Emery’s personal tutor) over for dinner a while back and he says Ray is totally dedicated (after his hip surgery). The kid’s got talent if he applies himself. I didn’t think much of his attitude for a while there (Ottawa), but he worked his butt off for me in the minors. He went to Russia, which was humbling, and played well for Philadelphia last year until he got hurt,” said Low.

Ask Patrick Roy, Ron Hextall, Dominic Hasek and Curtis Joseph about emotion control. Each of those goalies at one point or another lost it on the ice but they made save after save and won.

Don't cut Lehner's balls, we have enough of that in this boring, staid city already!

Gotta agree with sens on the lehner "awesome" thing. It's good to see a player with a spine in a sens uniform again. Hopefully he isn't run out of town too. Ottawans don't like players who play with emotion or creativity. They like the guys who play it safe and always do the "right" thing. "Just bank it off the boards"

Tanking is the best thing this team can possibly do right now. There's what 14 home games left? We can deal them sucking for the stretch run so we can land the "Nuge" with our first pick.