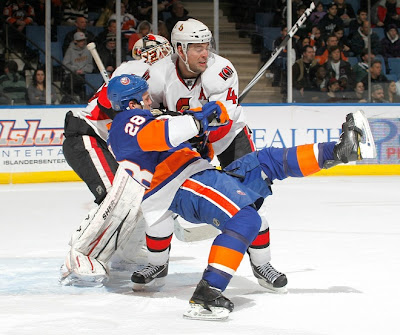 The Senators have to like where this is going. The Leafs get a first and a third rounder for Kris Versteeg?

Wow. Great deal for the Leafs and the Flyers get a 24 year old forward who will help them for a while down the road. Good for both sides.

Now, Ottawa doesn't have a 24 year old forward with the pedigree of Versteeg to trade (and if they did, why would they want to trade him?), but it further sets the precedent of having to give away good draft picks for help at the deadline. If Versteeg is worth a first and a third, then Alexei Kovalev could be worth a 3rd rounder. Possibly more with the way he's been playing lately. Chris Phillips could fetch as high as a late first or second rounder if a serious bidding war develops for his services.

These early deals before the deadline not only break the ice, but they put further pressure on teams who haven't jumped in the pool yet and it gives them a blueprint for what it's going to take to ply away rentals.

......Meanwhile, the clock is ticking on franchise defenseman Chris Phillips. If you thought it was a big loss for the team and the community when Mike Fisher was sent to Nashville, how painful will it be to see Phillips (who is just as involved in charitable events around town) leave the team when he's currently just 81 games shy of becoming the second Senator to play 1000 in the red and black sweater?

It just doesn't seem right that the Sens probable lone veteran defenseman next year will be one of Sergei Gonchar or Filip Kuba, and not Phillips. Ugh. It's entirely possible that this defense core will be worse next season, even though it's hard to believe. Just because fans are excited about all the possible rookie blueliners coming next year, doesn't mean they are going to step in right away and play well. In fact, probably one or two will prove they don't even belong at the NHL level yet. If they do make it, they're going to need veteran guidance, as well as a minute muncher to take the pressure off of their games. If Kuba or the struggling Gonchar are the ones to play over twenty minutes a game next season, it could get ugly. Phillips should be the guy, and he should also be a Senator for life just like Alfie.

Creeping up on Bonk's totals seem to be a bad omen. Marian Hossa was shipped to Atlanta with 390 career Sens points, just 9 behind Bonk......

....Zenon Konopka, for all the chaos that usually surrounds him on the ice, is a big time leader off of it for the hapless New York Islanders. In fact, he's probably the best leader on that team since the days of Mike Peca  (with apologies to the classy Doug Weight and the respected Bill Guerin). Not afraid to speak his mind (as Mario Lemieux can attest), and completely fearless on the ice, ex-Ottawa 67 Konopka is an unrestricted free agent this summer currently making 600 grand. He'd be a perfect replacement for Jarkko Ruutu next season and would quickly become a fan favourite.

You have to wonder how closely he'll be watched tonight by Sens management.
Posted by Jeremy Milks at 7:58 PM

The Flyers have a scary looking group of forwards that just keeps on looking better with the addition of Versteeg. Even though they're always tight to the cap, they seem to make things work. Full credit to them.

They're also gutsy about dealing away first rounders. Remember, they gave a loot away for Pronger. At the same time, when they keep their first rounders, they make them count (Giroux, Richards, Carter). I don't like the Flyers, but I definitely admire them.

As an aside, how can Versteeg net more than Fisher?

I'm with on the need for a solid veteran for next year. I know it's popular to give Rundblad the Norris already, but he has yet to play a pro game on the smaller North American ice surface. Wiercoch is still trying to find his way in the AHL.

How about a Cowen and Phillips shutdown pairing?

Those all-time Sens stats are fun to look at. There's perfect symmetry at the top. Alfredsson leads in games played, goals, assists, points, and ... alphabet.

According to hockeydb.com, we've never had a player who's higher alphabetically than Alfie. Any GM that wrecks that symmetry should be canned.

Also, not sure if it was mentioned anywhere in the press, but it seems that Spezza passed Yashin for second place on the Sens all-time points list.

Lastly, I don't think Barnaby played on the Island, although I get what you were getting at.

Anon. Whoops. You're right. I was thinking Buffalo with Peca. I'll fix that. Thanks!

i'd like to see Big Rig stick around. The Sens have to show players that if they sign here they will be valued in spite of a few bad games.

1st Anon... At first glance it may seem like Toronto got more for Versteeg, however, I saw this on another site. Interesting. There's a lot of factors that will have to play out, but it's a pretty good assessment:

On top of that, Versteeg is much younger and not yet in his prime, at $1.2M cheaper for 1 less year. Fisher is aging and expensive.

I'd say the deals are both fair value.

If the Sens can get anything (and I do mean ANYTHING) for Kuba or Conchar, I'd much rather see Phillips stick around. I mean, I realize that he could sign here in the summer, but renting him out would destroy his bid to be the second Sen to play 1000 games in that uniform.

If we're only going to get a 2nd or 3rd rounder for him anyway, then fuck it... jut keep him around. He'll take a discount on July 1st to stay here, so why make him move for three or four months?

Just gotta say that I'm lovin' the spirit of the comments with the focus on Phillips' legacy and his potential to be another 1000 gamer in a Sens uni. I think that's important also.

It builds tradition. The Habs have all those lifetime Habs that come back for those ceremonies. I'd be nice to be able to have a few lifetime Sens that we could celebrate 20 years from now. I think it also adds to the atmosphere in the rink when you have some tradition.

Time to shed the expansion team mindset and think of ourselves as a team that's trying to build something long lasting and special.

We'd wreck Phillips' legacy for what? A second rounder? Really? A player that the odds say would never crack the roster.

Phillips sticking around would be terrific, but I think if a good offer is there, Murray will take it. My one hope is that Phillips isn't too offended by the trade, and considers coming back to Ottawa as a free agent next season. Not many players are interested in returning to a team that just traded them, but given Phillips' respect within the organization and his roots in the community, I think he's one of few who would. Or at least I like to think so. (Also, I'm holding out hope that those rumours of someone courting Kuba are true, because I'd like nothing more than to see him moved from the Sens' roster.)

And although I don't know what gives Konopka the idea that he knows more about the game than Lemieux, I would love to see him in a Sens uniform. He was never supposed to be an NHLer, but he did it by sheer will, and I think that's a good lesson for some of the kids on the Sens next season. He's also got the Ottawa connections, and he'd allow Carkner to worry a little more about defence, and a little less about enforcing.

Enough with the legacy talk. Who cares? Seriously, how does "legacy" make our team better or more fun to watch? This team is terrible, far from even being competitive. 4-5 years away from being a contender if things go right.

I just want something to be excited about again. I've seen what Phillips brings to the table, if we can get an asset which will help us going forward more than he will, why not trade him? "Legacy"?

I agree with PG

I mean...the Habs have the Richards etc but those guys won something.
Feting guys just because they played for the same team a long time...seems to me that's a lot like celebrating Jane Doe for working at Human Resources 9-5 for 15-20 years. In a city like Ottawa, that rarely rocks the boat or does anything outside the box, I EXPECT players to stay here longer because expectations are low and there's a comfort bubble that isn't really afforded in a city like Toronto, Montreal, New York, etc.

Am I going to be happy when they retire Alfie's #11? Sure!
Is it going to mean anything to me? Nah.

Histories and legacies are forged through championships, pennants, trophies and so on. This is a good sports franchise, but in the end we're no different than Buffalo or Vancouver or Florida until we win a Stanley Cup. That's why I don't really care anymore who stays or goes. They're not winners and they're comfortable with not winning.

I was at So Good restaurant earlier (on Somerset, go there before you pass on) and Peter, affable as ever...was discussing the Sens. We were like "Fisher gone, better cos Carrie is from Nashville, Alfie could be next." And I was expecting to be like "The captain? RAAAAAAAAAAAAAAAGE!" but my reaction was like:

As long as there's the Senators around, whoever they are, and they win...I'll be tuning in. I'll tune in through a resurgence/rebuild as well, of course...but I have very little attachment to Senators players individually.

That ended when Hossa, Chara, etc. all went away.

It's not so much that Phillips is having a down season - he has been fucking awful. I have more confidence in Brian Lee right now.

Phillips has had down seasons before and I was all for sticking it out, but when Old Reliable is your WORST defenceman on many nights, it's time for a change of scene.

I will be hap-hap-happy to see the last of Kuba and Campoli, but right now I have more faith in them than Phillips. Scary.

I hope fans revolt and stop buying tickets. Murray's playing the fanbase for a bunch of fools. Kelly for a late second rounder? Seriously?

Why do ownership in Tampa and Calgary have the sense that new management can make a difference, while Ottawa decides ... Uh, let's trade away all the players and keep the guy who hasn't won squat in 30 years.

What message do these moves send to UFA's? It says stay away from Ottawa because the management will never be held accountable for non performance, the players will be.