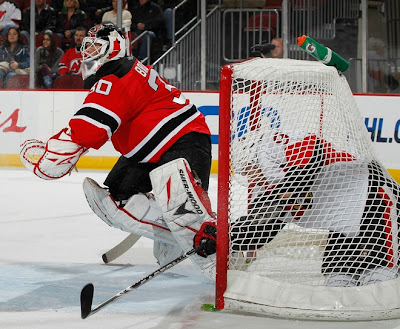 Another tough loss for the Senators despite an outstanding performance by rookie Robin Lehner. He was so good that Cory Clouston should be thinking about starting him against the Wings on Wednesday night. As for the Senators offense, it's the same story. This team is just waiting for Jason Spezza to return to have any chance to win a game.

Really, it's been the same game since Spezza was injured, give or take a few goals by the opposition. I'll be cutting and pasting these same sentences into the next game post. Can't wait.

Interesting parallel here. Both the Devils and the Senators are having disastrous seasons. The difference? The Devils took action early and removed John Maclean once that coach lost the room and replaced him with a veteran in Jacques Lemaire. It took a while but the Devils are starting to play well and there's a team mission to finish back at the .500 level before the season is done. In short, they have that winning attitude back which bodes well for them next season. The Senators? They decided to stick with the status quo and keep Cory Clouston behind the bench, despite it being obvious that he had "lost the room" (see public comments by Jarkko Ruutu and Alex Kovalev) and completely run out of answers. One team is on the way up, one team is still seeing how far they are going to drop. The Devils took a stand and decided that losing was unacceptable. When will Ottawa do the same? Looks like they will try to solve their problems at the trade deadline, a gambit that is likely to fail because they are just going to turn into a rental shop for other teams. Meanwhile, the losing culture begins to take hold....

…Another sign the Ottawa Senators have become completely irrelevant this season? They only garnered one mention in the now infamous HNIC Player Poll, good, bad or otherwise. The only Senators appearance was by Matt Carkner who was voted the third toughest player by his peers around the league. The good news? Ottawa wasn’t among the top five destinations that players wanted to avoid. Despite their troubles, Ottawa has still been able to lure big name free agents like Sergei Gonchar and Alexei Kovalev (I know, I know) for every Dany Heatley and Joe Corvo who wanted out of town. And in Heatley’s case at least, it seemed like it was a hockey decision (or rather, a Cory Clouston related decision) than it was a problem with the city itself. While you may have to take out a second mortgage to afford buying an OC Transpo bus pass these days (and the prices are going up …again), Ottawa is still a hell of a place to live for the most part……I have to agree with Brian Burke on this one. I didn't like the fact that a player who was picked for the All-Star Game had to be embarrased by the process and made the last pick on national television. Sure, Phil Kessel won a car and some money for a charity, but he's still the butt of jokes and it all seemed somewhat mean spirited. Say what you want about Kessel, but does he, or any other player, need to go through something like that for an All-Star game? Burke has it right. Pick the last 4 or 5 guys from a hat......

…..Count me in as a fan of the new Tampa Bay Lightning jerseys (see them here at Icethetics). This is the direction the Senators should be headed – traditional striping, simplistic lines and an iconic logo. It seems as though there will be a new Senators black third jersey next season as reported by a few people. Just add it to the mountain of jerseys this team has unveiled in its short 19 year history. Here’s another thought: how come the Senators are so hesitant to add the now popular lace collars to their regular jerseys? In fact, why hasn’t every team in the NHL gone this way? It should be required of every club, just like the fight strap. Why? I say, why not? It’s the coolest thing you can put on a jersey, other than a captain’s “C”…… Looks like Ottawa has a lot to live up to next year after Carolina did a great job hosting this seasons All-Star weekend. The new convention centre being built where the old Congress Centre was will be a big help, as would a potential new scoreboard at Scotiabank Place. But really, it’s all about the spirit of the thing, and Ottawa has done a good job in the past with the World Juniors, the Memorial Cup tournament and two recent NHL Entry Drafts. Senators fans should savour the experience, because the All-Star game won’t be back in town anytime soon, maybe not for another 30 years. I wonder if Cory Clouston will be fired by then?

…..As a last word on the All-Star game, I’ve never understood why people get so up in arms about it. People like Nick Kypreos should, in the words of Carey Price, “just relax, chill out”. The All-Star game is for kids and sponsors and is a convenient smorgasbord of marketing for the NHL brand. That’s all. There are thousands of NHL games from October to June. Why does everyone feel the need to make the one exhibition game in January so meaningful and worthy of controversy? If you’re that passionate about an All-Star game and so eager to rip it apart, maybe you’re taking this whole thing way too seriously.….. I also find it humourous that people get so upset by big hits in NHL games but claim the lack of hitting in the All-Star game as another reason it should be dropped......

.... It's been bandied about before by other people here and there (and mostly mocked), but the NHL should seriously look at instituting a rule that makes it a penalty to intentionally go down on the ice to block a shot. Make it an illegal defense. It would serve two purposes: one, it would allow many, many more pucks to the net and create more offense from rebounds, and two, it would cut down on horrific injuries like the one that ended Ian Laperriere's career and almost killed Trent McCleary ten years ago. Players could still block shots standing up but would be given a 2 minute penalty for going down on purpose, even on one knee. With the league starting to revert back to "dead puck era" scoring levels, something must be done to open up the game without going to 4 on 4 full-time or making the nets bigger. Combine this rule with new legislation to radically decrease goalie equipment, (especially the shoulder pads and the ridiculously huge trapper) and you might even see goals scored from above the faceoff dots for a change......

And finally, best of luck to Ray Emery (a Black Aces favourite) who has so far defied the odds and is about ready to make a comeback after a debilitating hip injury that should have ended his career. In fact, 99% of athletes would probably have called it quits. The one other guy who beat it, as this must-read Citizen article points out, is Bo freaking Jackson. This guy was such a name, he could pull Gretzky, Jordan and even Bo Diddley into his cult of personality back in the early 90's. Check it.

This was a fantastic column.

Not sure I agree about the culture of losing stuff. I mean, if you hire Bryan Murray you're not exactly sending fireworks out there that you're going for the throat, right?

That aside, look at Chicago and Pittsburgh and Washington Those teams were just brutal, then got a bunch of young players and won a Cup shortly afterward. It's far, far better for the team to suck eggs and keep losing for this season and maybe next while collecting high picks that will be a future foundation. This team should not look to become a Toronto or Rangers that just inch into the playoffs or 9th or 10th place only to get a mediocre pick and continue to be mediocre.

I'll go one above your call to eliminate shot-blocking. Kill icing during penalties too. You haev the puck? Skate with it and keep skating with it. Don't just slap it down the other end to kill time. Keeping the puck active will lead to errors, forced or unforced, and more scoring. Win-win.

Usually a fan of your work, but I think you really missed the mark here...

The devils did not fire John Maclean early in the season, it took them months of losing to decide. It was a very, very late decision. And even when they did, they were still a horrible team for a quite some time. Hardly
"taking a stand". Also, they had the benefit of having a coach like Jacques Lemaire lying around who could step in and not miss a beat on an interim basis. The parallel is weak at best.

As for the Senators predicament I fail to see how attempting to rid ourselves of underperfoming, overpaid contracts at the deadline for picks promotes a losing culture. At the end of the year, by all accounts clouston will be gone, along with the GM and many of the players. The fact is, what happens down the stretch will have very little impact on the mentality of this team next season. Is having a lame duck interim coach really such a good idea, when we will probably be hiring an established name in the off season?

Anonymous, the Devils fired Maclean before the halfway point of the season after giving him his deserved shot. When he didn't get the job done, the organization removed him. To me that is "taking a stand against losing". The fact that they were still bad only means that Lemaire needed time to get them back on track, like any other coach would need. The point is that they did something. They also made roster changes. Ottawa on the other hand, has done nothing on either front. To me, the parralel is very clear and very telling.

What roster changes? the only player I can think of is bryce salvador(correct me if I'm wrong), and he was a cap casualty. Their D was already horrendus before getting rid of him so it was obviously a financial decision, not a hockey one.
Good point about Lemaire needing more games to get the team playing his boring but successful style, but this is still a different situation from Ottawa's.
It doesnt matter whether the Sens trap or play wide open hockey. This team does not have the personnel to get the job done. They lack goaltending, scoring depth and have a ton of turnover- prone defencemen. How is replacing Clouston with anyone else going to make a difference. It might give them a "kick in the ass", but they've been getting that all season long. It almost feels like he's already been fired, because in reality no one thinks hes coming back, just like any other interim coach they hire won't be coming back.

It's also worth noting that the last time Murray gave the team a "kick in the ass" with Clouston coming on board, we missed out on Tavares and Duchesne...and what's our biggest issue? Good scoring forward.

Let's not do that again this year. Embrace the suck and we'll be better off for it next season and a few seasons down the road.