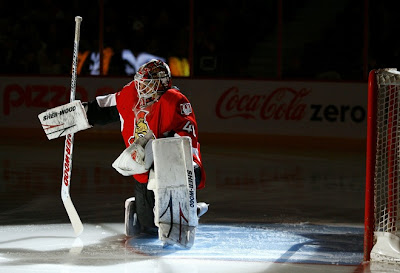 A few quick thoughts for your Saturday:

- Great move by Ottawa GM Bryan Murray to move struggling goalie Brian Elliott out of town. When a goalie falls that deep into a hole, he loses the confidence of his teammates and the organization, even if his poor play is also a result of a poor team in front of him. In this type of situation, it's always best for the goalie to move on. A forward or a defenseman can have a terrible year and still have the trust of everyone to bounce back. A few select goalies can do that too, like Martin Brodeur or even Ryan Miller this season. But not a guy like Elliott who has no proven track record and a string of disappointing stretches of play where he would let in a bad goal almost once a game. Cory Clouston and Murray were right that Elliott was forced into a role he wasn't ready for because of Pascal Leclaire's injury problems, but he didn't do a thing with the opportunity either. Getting Craig Anderson in here will give them a head start on evaluating him for a possible signing next year. At worst, this is a lateral move, but if I was Murray I wouldn't have offered Elliott a new contract in the summer. If Anderson is a dud for the rest of the season, that will focus their efforts on getting the right guy come July. Once Leclaire walks this summer, a lot of heavy baggage in the goaltending department will be gone.

- Even though the Sens lost their tenth straight game at home last night, and the rink was filled with a surprising amounts of Bruins fans, the atmosphere was great and the Sens contingent was loud amongst the 18,500 in attendance. It may have been my imagination but I sensed that the trades have energized the fan base a bit. Chris Kelly got a real warm ovation with most of the rink standing for at least a minute but it wasn't a sad moment in any sense. It really felt like people were accepting and ready to move on. When the Bruins took control late in the game, the crowd sagged a little but were soon making a din with every botched Senator rush up the ice and there wasn't as much groaning when a mistake was made. I think the fans will be very patient during this rebuilding process, especially when they see little glimpses of greatness, such as Bobby Butler's beauty of a goal in the second period.

- Speaking of Butler, this is a different player than the tentative one who played his first few games this season. Jason Spezza was trying to feed this guy all night and Butler looked dangerous for the most part, even if there were a few moments where he looked more surprised than anyone when a perfect saucer pass from Spezza reached his stick through a maze of players. They don't make too many perfect passes like that in the AHL.

- Also, don't let that 4-2 score fool you. Robin Lehner was excellent for most of the game.

- Got to say Tomas Kaberle looked really mobile back on that blueline and he should be a big help to the Bruins. He's exactly the type of defenseman they needed, with apologies to Chris Phillips. Sure, Zdeno Chara can blast the puck but until they got Kaberle, they didn't have that silky smooth - soft hands type of rearguard who will always give penalty-killers nightmares. The Bruins gave up a lot for him, but they have to go for the Stanley Cup this year with Chara still in his prime and Tim Thomas not getting any younger. The Bruins are going to give Philadelphia some competition in the East.

Have a great weekend. Black Aces will be back after Family Day.
Posted by Jeremy Milks at 10:18 AM

Got to agree with you that the Sens fanbase seems energized, but I think along with the trades, it has a lot to do with the young guys getting opportunities to play in the NHL. I know I love watching these guys gets their first shot (I guess not all are young, as is the case with Benoit), and I'd wager most others like seeing the energy and excitement they bring to the rink. Makes it really fun to watch.

Hey Jeremy, keep up the great work! I loved the fact that we had three fighters in the lineup last night. I thought Lessard was skating really well. Because this season is already a foregone conclusion, I think we need to make sure that guys like Spezza, Alfie and our other top-end players don't sustain any more injuries. Carkner, Neil and now Lessard make this team a real force in the fisticuffs department. Bring on the Leafs!!!

Hey Peter, I agree. I almost forgot what it was like to see young guys come in and play their first games in a Sens uniform. Somehow the losses don't seem as important anymore. But I'm thinking that will change sooner than we think.

And anon, ya, Lessard was fun to watch although he didn't really have an opportunity to do what he does best. As for his skating, he gets where he needs to go, but it's like watching a dumptruck with no brakes on ice. All knees and elbows. He's a throwback for sure.