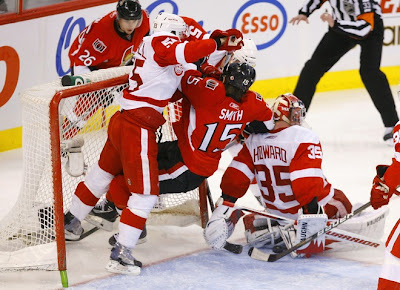 That's the way the game should be played.

It was a coach's nightmare, but long suffering Senators fans were finally treated to an all-out mindblowing tilt, the type of hockey that is so rare in Kanata these days, so rare in the entire NHL.

Nobody had time for defense as Johan Franzen ripped off 5 of the 12 goals scored and the fans in the rink were very into the spirit of things, booing Cory Clouston's decision to pull Robin Lehner after four goals, showering the ice with hats after Franzen's third snipe and going completely ballistic when a sure Senators goal was called off late in the third due to the mystifying "intent to blow whistle rule" that only seems to make sense in some kind of mystical land where 2 + 2 = 5.

While it's not completely fair to say the Senators came into this game looking to run and gun with the powerful Wings, they did come out on fire with Alexei Kovalev looking like he was desperately trying to convince Ken Holland to trade for him. He ended up with 3 points but gave the puck away to Henrik Zetterberg in the last minute which allowed Franzen to notch his 5th of the night.

Big hay will be made out of the fans going up one side of Clouston and down the other when he gave Lehner the yank, but it looked like the coach was sensing that the game was going out of control and he wanted to protect the kid. But obviously there's been a lot of negative energy building throughout the fanbase and it came out spontaneously at that moment. The fans are excited about Lehner and they were trying to let the kid know they have his back, a good sign from a sometimes complacent group of handsitters.

Since the season is already lost, it would be a welcome sight to see the Senators try to run and gun like that every game. It will give them a chance to score some goals and start feeling better about themselves, have some much needed fun and maybe even win a few games. It will be tough on the goalies, particularly Brian Elliott who looks like he will be playing the majority of games down the stretch here, but protecting Elliott should be the least of the Senators worries right now. Elliott's future with this team, even as a backup, is not looking good right now. He's shown he's not going to be the guy, so why not bring in a veteran or even two veterans if Lehner is the one you want to mould for the future.

There was only one missed opportunity tonight for more entertainment, and that was when Clouston managed to keep control of himself after the late goal was disallowed. His face went a little red but he didn't even say anything when the ref explained the call. The fans were going nuts and the replays on the board clearly showed the puck crossing the line (at home you could hear the whistle on the replay come after the puck went in as well).

Right there was the perfect time for Clouston to really blow a gasket, one of those classic Pat Burns style rants or even the more rare Robbie Ftorek Bench Toss. Either would have been appropriate at the moment.

Clouston is always so in control of himself in public, so stern, that it would have made great theatre and possibly even humanized the coach for the fans.

Alas, Clouston concentrated on getting his guys ready for the next shift, and was complimented by future Senators GM Pierre McGuire on TSN.

But I still say he should have at least thrown a stick or two onto the ice, or Ryan Shannon or something.

Some personal advice, free of charge.

Never, ever attempt to eat an entire Cinnabon. I tried one once in the summer, just a bite, and I was impressed. Just ate a whole one yesterday and I am only beginning to recover from the shock my system took. Huge bun. Huge mistake. That is alien food and I swear I was high for close to two hours after eating it. There is also a permanent cinnamon burn in my mouth that I fear will never leave me.

Also, never watch the movie High Tension, especially if you're alone in the house. I'm not a squeamish guy, but I had to hit the stop button about halfway through and watch some Will Ferrell to get me to come out from my cowering position behind the couch. That is one scary flick, but still not as scary as the Cinnabon.
Posted by Jeremy Milks at 10:18 PM

Milks - if you found the movie freaky, then you should read the book. It's called Intensity and it's by Dean Koontz. It's not an official movie-from-the-book type of thing, but Koontz wrote a screenplay, but then refused to allow it to be made, after seeing some of the stuff the director wanted to add it. Then, the guy just changed some names and the title, and shot it anyway.

Hey Rob, thanks for the tip on the book. Although I'm not sure I want to subject myself to the long version of that story either. Same thing happened when I watched Paranormal Activity. Maybe I'm getting too old...

Capital Grass - that is hilarious. My feelings exactly.