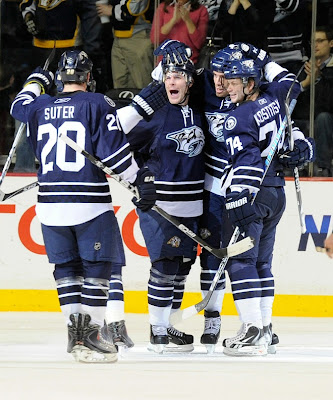 "I think Nashville plays a system that is going to be perfect for my game," he said. "It's intense and hard working. It's all about team, and that's what I love and look forward to. I can fit that mould really well and I'm excited about that.

"It's a more aggressive style of play than we have played in Ottawa. That's why they've being successful so far, and I can add to that."
-Ottawa Citizen

Is this a bit of a backhand to Cory Clouston and his passive defensive system by Mike Fisher on his way out the door?

Couldn't be. Could it?

The Senators should cut ties with Brian Elliott this summer.

He's played so poorly this season that you have to wonder about his value as an asset to this organization anymore. The Senators don't have to give him a qualifying offer this summer when he becomes a restricted free-agent and could use that money towards bringing in at least two unrestricted goalies this summer.

Unless Robin Lehner becomes a miracle man, my guess is he'll be starting in Bingo next season as the number one guy to get experience. That means the Senators have a chance to completely revamp their NHL goaltending this summer by signing a true number one and an experienced back-up.

There is so much baggage with Elliott now that it's best for both sides to start fresh.

I'm an Elliott fan. I can't defend his play this year, it's been pretty bad. But, he showed last year, during our 11 game win streak, that he has an "A" game that's pretty good.

He's young and still developing. I think it's too soon to cut the cord. Add to that, the whole team is playing pretty poorly this year, there's lots of uncertainty throughout the organization, and he's been put in a role that should be Leclaire's. Maybe as a young goalie, Elliott needed to be the backup for a few years to develop properly.

I say keep him as the backup, and get a UFA for the main role. I'd love to see Ray Emery back, if he auditions well in Anaheim.

As for the Fisher comment, he's clearly saying that his talents weren't being used in the best way. Some would say, that falls on Clouston. But, they also played passively with Hartsburg. The GM is responsible for hiring the coaches.

To me, the bigger issue is that many players on the team are not playing to their potential. Fisher's comment is pretty revealing.

I wonder how Phillips feels. He and Volchie were one of the best shutdown tandems in the league. Their role was clearly defined. That was their job. Everyone can relate to that.

This year, as Phillips enters his UFA year, they change his job and ask him to play with an extremely talented young player like Karlsson. But, Karlsson is also a giveaway machine. Phillips doesn't look so good anymore.

Maybe someone will give him his old job back, and all of a sudden he'll be looked at as a great shutdown guy again.

Here's the thing, three years ago we had the best line in hockey: Spezza, Heatley, Alfie. The best line. Why'd the management hire a coach (Hartsburg) who wanted to mess with that by getting them to play a different style. They were already the best.

Then we had the one the best PK tandems in the league with Kelly and Vermette. Why mess with that?

Then we had Phillips and Volchenkov. They had a full year to sign Volch, and they let him go to UFA where we had to compete with other bids. They ruined a great shutdown pair.

And to top it all off, look at the tape of Fisher and Neil from the 2007 playoffs. They were awesome together. They played a hard game. And Fisher was still a 20 goal guy. Why mess with that?

It seems like they tried to turn him into a finesse guy with Kovalev. Why?

In any case, Fisher clearly knows his game has another level. It's too bad he wasn't given the opportunity to show it here.

We got a first rounder at about the 20th position. The stats say that a player drafted at that position has a 40% chance of being an NHLer.

But, I'm pretty sure Sens Nation will drink the Kool-Aid and dream that the next version of Ryan Gezlaf is on his way.

It's amazing what has happened in Tampa and Calgary. Calgary hasn't changed a thing, and Tampa's made a few moves. But, both teams have started winning more since they changed the work environment by bringing in new management.

I'm sure that we could do the same.