No Love Lost Between Kovalev and Clouston 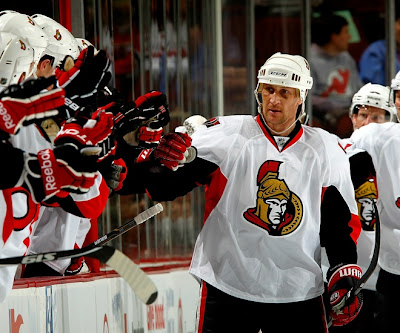 With the flurry of recent trades, a lot of the focus has fallen off of Cory Clouston and his coaching staff, but in the wake of the Alex Kovalev salary dump to the Penguins for a conditional 7th round pick, this quote by GM Bryan Murray in Ken Warren's Citizen piece really stood out to me and likely reveals some contempt on Murray's part:


“I don’t know if he was happy here all the time; maybe he felt his role on the team could have been different,” Murray said....

“Alex is a veteran player who needs to be important. He has been an important player. If you don’t give him that importance, it’s easier to not play at your level. As a coach, you have to define where he fits. (With) Alex, it didn’t work. So he moves.”

Even more to the point is the Sun's Bruce Garrioch:


Kovalev will be thrilled at the prospect of moving. He couldn’t stand playing for Clouston and is going back to a place where his career flourished.

Just a hunch - Murray is probably not very happy that the team he constructed went out and embarrassed themselves on the ice this season. If you look at the opening night roster, the Senators were loaded with a lot of great hockey players - a couple of them in the elite class - and yet Clouston ended up feuding with many of his veterans.

At least two spats were made public - those of Jarkko Ruutu and Kovalev - which leaves you wondering how many others were unhappy with the coach.

Regardless, Clouston has a team full of young minor league kids now and those are the kinds of players he's had success with in the past.

Perhaps his coaching style will mature along with them.
Posted by Jeremy Milks at 9:17 PM

Maybe the problem wasn't Clouston's coaching "maturity" or the approach of Ruutu and Kovalev; Maybe the players built to fill out the team didn't fit the system Clouston employs, so they didn't like it and he didn't care.

Look at the team right now: Young players just thirsting for an opportunity, and buying in. Wednesday's game might have been the best of the season for Ottawa, and they were missing most of those great hockey players you mentioned.

Please Christ, no. Just fire him for the love of sweet Jesus. I can't take another season of Cory Clouston.

No, the problem is most certainly Clouston.

When your top offensive player wants out, a decent grinder wants out, your top free agent signing wants out, when word is veterans are quite unhappy and aren't buying in, then you have the wrong man for the job.

I get what Clouston was brought in, he was cheap...but this is a failure on Murray's part (yet again). He needed to bring in a veteran coach with as much, if not more, experience than the players and instead he got a green one without the player's respect.

Let's hope Murray's NEXT coaching hire is a good fit for the team.

>I get what Clouston was brought in, he >was cheap...but this is a failure on >Murray's part (yet again). He needed >to bring in a veteran coach with as >much, if not more, experience than the >players and instead he got a green one >without the player's respect.

I don't think you're considering the position Murray was in. Two recently fired coaches still on the payroll (both of whom were quite experienced), and a hands-on owner who didn't want to be paying yet another experienced coach. Do you really think any of the experienced candidates were going to step into Ottawa for less than a 2 or 3 year contract? Why would they, just to be fired if they couldn't win with a weak defense and even weaker, inconsistent goaltending?

No, past mistakes hamstrung Murray when appointing a coach this time around. Now, Leeder / Melnyk could have fired Bryan Murray and appointed a new GM, who may have appointed a new, experienced coach. But I don't think the organization wanted to do that for obvious reasons: Ottawa is already seen as a franchise in turmoil. What hockey professional that wants to achieve success and advance their career would sign onto a franchise that eats up coaches, goaltenders, and now GMs? No chance.

Christ, why the hell is Bm still employed by this team? And now they're going to re-sign phillips. Talk about amateur hour here. This is just pathetic. Nice rebuild. Keep the old fart who does absolutely nothing well(talking phillips now, not Bmil) cause he shows up at hospitals and fund raisers instead of getting a high pick for him. What a joke. Embarassing is an understatement. Losers is more accurate.