Kelly Traded After 9th Straight Loss At Home ... plus It's Still WINTER 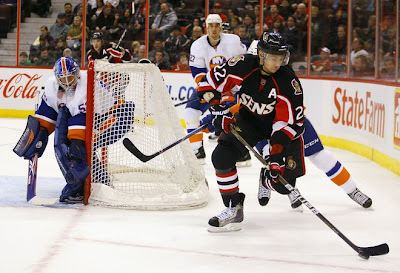 My Grandmother Jean's favourite player is Chris Kelly.
With news that he's been traded to the division rival Boston Bruins for a second round pick in the 2011 Entry Draft, I'm sure she's completely pissed off this morning.
Jean, who follows the Senators more closely than even I do, liked Kelly for all the reasons other fans should have liked him – he's a hard-working, versatile player who played the same way every night, was easily the team's best player in this disastrous season, and was also fairly cheap at just over 2 million a year.
Now he's gone for a second round pick that has no guarantee of making it to the NHL, and if he does in four or five years, would face even stiffer odds at becoming as good a player as Kelly was for this team right now.
Do I like the deal? No.
But at this point, after the shock of the Mike Fisher trade, it all seems so inevitable.
Bryan Murray is dead serious about rebuilding this team, and doing it the slow, old-fashioned way, again with no guarantees it will even work. A lot of these so called "rebuilds" fail miserably and tend to send teams into an interminable cycle of losing. Chicago won the Stanley Cup last year, but they were in a rebuilding mode ever since trading Chris Chelios to Detroit in 1999. That's ten years of hell. The Panthers, the Islanders and the Oilers have all basically been through multiple rebuilds with only the Oilers breaking through with any success, although that was short-lived because they didn't really have the strong foundation to do anything but catch lightning in a bottle.
The Kings are starting to get good, but they too have went through multiple rebuilds with almost no success since they traded Wayne Gretzky to St. Louis in 1996. And even now, with sky high expectations, they might miss the playoffs altogether. How long have the St. Louis Blues been preaching patience to their fans with little or no payoff? Columbus?
So there's that.
But this isn't a condemnation of the Senators trying to rebuild. They really have no choice right now.  The season has been a complete disaster and a lot of careers have been ruined because of it. You can speculate on the careers I'm speaking of.
The strange thing is the Sens are intent on keeping Jason Spezza but are trading away all of his support players. If Murray is serious about burning down the house and starting over, isn't it strange that both Spezza and Daniel Alfredsson are deemed untouchable?
Who are they going to play with next year? Will they be happy on a team destined to finish in the cellar for at least another season, probably two? By dealing two character centres in their prime years, Murray has completely gutted the depth of this team and leaves you wondering who will be left to lace up their skates next season.
Don't get me wrong. I have never supported trading Spezza or Alfredsson. But then I never expected to see Chris Kelly or Mike Fisher moved as well.  I wouldn't be surprised if Chris Neil is now sent packing for a draft pick.
Ugh. As in ugly. Seeing Neil in another sweater running over the remaining softies on the Senators would be enough to make a grown man cry (not saying that grown man would be me).
Will fans be persuaded to buy tickets to watch a team that is now all but guaranteed to be horrible next year?  Some say Ottawa fans are smart and will support a complete rebuild. Are these the same fans that didn't sell out the building when the team was a Stanley Cup contender? I'll be at the Friday game when Kelly comes back wearing the Bruins colours. I'd be surprised if the remaining Senators get half the applause that Kelly does when he steps on the ice.
One thing is for sure – this is a sad and bitter time to be a Senators fan.
And how do you like the weather this week Ottawa?
Posted by Jeremy Milks at 8:47 AM

say what you want about BM but after watching him speak about the two trades this week you gotta admit he's a pretty classy human being.

Not as sad a time as it has been for the two years previous to today. It seems as though there is a key ingredient missing in your argument. The sens suck. They have been almost unwatchable for the better part of 3 years. And non-competitive. It isn't much fun as a fan knowing every year since the "cup-runner-up-run" that this year is going to be worse than last. We have had nothing to look forward to but more disappointment at the start of each year. Now, at least we have the hope of watching a team IMPROVE. Remember what that's like? A hell of a lot more fun than it's been here in the past 3 seasons. We might even see some exciting hockey some time in the next 3 years, and a core of players getting better, not worse. Who cares who's wearing the jerseys as long as they're getting us out of our seats? And seriously, how much worse can it be than being the lowest scoring team in the league and last in the conference?

Rather than ship out the players, dump the coach and the GM and I bet that they start improving again.

That's how most pro sports teams work. There's usually at least some accountability in the executive suites. It's there that you set the tone of the organization.

You never hear Detroit or NJ say rebuild. In fact, Lamareillo has said he doesn't believe in them. And, if you look at NJ's performance since they canned the coach, it's tough to argue with him.

I think the players are paying the price for the organization's failure. Why should Fisher and Kelly have to move, when much of our failure is due to Murray's acquisitions that didn't pan out.

This team is completely dysfunctional. I think the worst is yet to come, because we'll soon find out that UFA's will steer clear of this organization.

Don't get me wrong, we can still nab the aging UFA's by overpaying, but we ain't getting the prized possessions at fair market. Those dudes will go to Detroit and the like.

I was FURIOUS today when I heard Chris Phillips say he wanted to stay here, just as furious as when I heard Spezza, Alfredsson and Neil say the same. I want ALL of them gone. I would rather have an 18 year old in here that costs 800,000 a year than these comfy vets. They should all be sent packing. If you're going to talk about loyalty, bully to that. If you're going to talk to no-trades, you can assassinate characters to make those irrelevant.

I cannot wait until the team has 25 new faces on it! BRING ON CHANGE.

@Sens ... if you've listened to BM after the trades this week then you know that he's too classy to go the route of a character assassination

The wive is raving about this trade. Her favorite Senator (because she thinks CK looks like me) has gone to her Boston Bruins.

I agree Kelly has been the Sens best player this season. I'm more shocked to see him go than Fish.