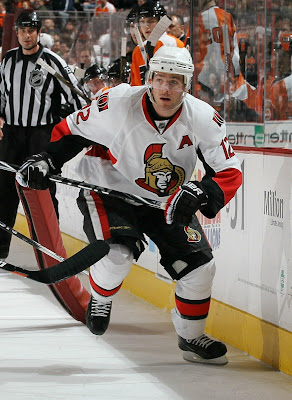 The somewhat unexpected (but inevitable) trade of Mike Fisher to Nashville today officially signaled the end of the old guard in Ottawa and painfully ripped open the doors to a full rebuild in the capital.
A first round pick that will be in the middle of the round and a conditional pick doesn't seem to be a home-run type return for a guy like Fisher, but it should be considered fair and GM Bryan Murray got a strong asset in return for one of his biggest trade pieces (I find the sentiment that Nashville "overpaid" for Fisher completely false – anything less than a first rounder for Fisher would have been a complete steal).  And now it looks like there's going to be a lot more moves on the way, but none more bigger than this one.
You also have to consider the cap space this trade creates as part of the return for Fisher. They save 4.2 million for each of the next two seasons and that's quite significant when you add that to the space created by the likes of Jarkko Ruutu, Chris Phillips, Alex Kovalev, Pascal Leclaire and Ryan Shannon, all of whom will be UFA's.
They may need the savings when the disappointing renewals for season tickets start coming in this summer.
It wasn't exactly a strong farewell performance for Fisher this year but he's been battling a rib injury all season long and hasn't been able to hit or play his normal power forward game. But you don't have to go too far back to remember Fisher physically imposing his will on other teams and scoring big goals with that underrated laser beam of his.
For those of us who have watched this Senators team for a long time, it's going to be more than strange to see the Senators without number 12. Many thought he was the heir apparent to Daniel Alfredsson as team captain but it's also interesting to point out that Alfie publicly stated just days ago that Jason Spezza should be in line for the "C" when he finally hangs them up. That's probably just a strange coincidence but maybe this deal has been in the works for longer than we know.
Maybe time will tell that Murray traded Fisher at exactly the right time. Power forwards tend to regress in their 30's, and with Fisher now past his 20's, perhaps the Senators have already used up his best years. The two places where Fisher will be missed most are in the playoffs and in the community. The playoffs are a pipedream so that doesn't really matter anymore, but Fisher was a very visible presence in this town and probably the most popular Senator of all-time next to Alfredsson, as well as the most charitable.
But is this not a Hollywood ending for Fish? Trading for Carrie Underwood's husband in Nashville is probably the most genius marketing move in the NHL since they held a lottery for Sidney Crosby or when Mark Messier returned to New York in 2000. It's almost too perfect to believe. (uh oh).
So who's next? The obvious one is Chris Phillips but does Fisher's best friend on the team, Chris Neil, now feel less attached to the future here as a result of this trade? Maybe he wants a taste of the playoffs this season as well. But, as always, you can't throw the baby out with the bathwater.
There are a lot of good players on this team having bad years.  If Phillips leaves and doesn't come back next season, who is going to step in and play his 25 minutes a night? Do you give those minutes to a rookie? Don't think so. The Senators would have to go out and sign a veteran, and with the free agent market looking thin this summer, who better to sign than Phillips himself as veteran mentor to all the young defenseman who are going to be in the lineup next season?
Chris Neil bleeds black and red and is a team leader in that locker room. Losing him would be just as tough as losing Anton Volchenkov last summer.
But with the Fisher trade, it looks as though Bryan Murray has finally thrown in the towel on this core group and that means no one is really safe.
One wonders if Murray can turn around and use this Nashville first-rounder in a package with Phillips to get that Boston-owned Toronto first-rounder.
Hey, one can dream.
Posted by Jeremy Milks at 2:36 PM

I cringed when I heard Alfredsson say that about Spezza. Former party boy, never led any team anywhere to any championships and he's the captain of THIS team?

Shouldn't we make someone who is a hard-nosed, two-way guy, a honest worker...kind of a plugger our captain? These skilled guys always burn us Jeremy. Daigle did, Yashin did, Heatley did, Spezza will too...just watch!

As for Fisher, loved him with all my heart. What a great guy. Good, gritty, heart and soul, true to home guy and hard worker. The first round pick is going to be good though. Now if we can dump Spezza for a first rounder...

Awful, awful deal. It's the Bryan Murray era ... what else is new.

Spezza will make an awesome captain. And he will win the only thing that matters.

I'm not sure what some fans in Ottawa expect to get for a guy like Fish? a 1st and 3rd is a good deal for an overpaid 3rd line center. And I love the guy.

Some fans outside Ottawa are whining that Nashville overpaid!!

Will always remember Fish with nothing but the utmost respect.

Though I just wrote that Phillips to Boston for the T.O first round pick, I've reconsidered. The Senators are already going to be playing at least one, maybe even two rookies on defense next year (Cowan, Rundblad). I'm not comfortable for them to be learning the finer points of defensive hockey from Gonchar and Carkner. Please keep Phillips. No, I think the best thing now is to move Kovalev or Ruutu to a team that's playoff bound for a prospect on the wing or at centre.

'Shouldn't we make someone who is a hard-nosed, two-way guy, a honest worker...kind of a plugger our captain?'

jeez, who could that be? if only there were someone who fits that description on the team.. hmmmmmm..

Hambown - there's no reason Big Rig couldn't re-sign with Ottawa on July 1st. He has a young family... I think he is smart enough to realize that if he's asked to waive to go to Boston, he should do it.

I mean, think about it... he spends a lot of time away from his family, as it is, with the road trips, and such. He can probably live out of a swanky hotel for the next three months.

Not only that, but he's a nice enough guy that he should realize how much this would help the team, going forward. I mean, if he can go somewhere else for three months, have a legitimate shot at the cup, get his team (possibly) a high first-round pick, and then re-sign in the summer... why wouldn't he?

I say that if that offer ever actually comes up, Chris gives BM the green light in a hurry.

I'm with you Hambown on keeping Phillips. The defense might be horrific enough next season without him, but I would move him if the perfect deal came along. The chance to get a second pick in the top 5 in the draft is such a deal. But I would try my hardest to get Phillips back in the summer. He and Alfredsson should retire Sens. It builds tradition and it gives you numbers to retire in the future. I'm hoping Neil ends up a Senator for life as well, but I'm not sure that's going to happen.

does anyone know what the conditional pick is if the preds lose in the first round?

My understanding is that there is no conditional pick if the Preds lose in the first round.

Quite frankly, I think that's the most likely scenario. We're looking at a first round pick at about 20th overall for Fisher.

To put that in context, we gave up a 1st rounder at about the same slot for Campoli. What we PAID for Campoli, is likely what we'll GET for Fisher.

We also paid a 2nd rounder for Sutton. If the analysts are correct, that's likely what we'll get for Phillips. We PAID a 2nd for Sutton, and we GET a second for Phillips. All speculation of course, it could change.

Nothing makes sense anymore. I'm going to the LCBO.

I'm with Jeremy and Hambown on retaining Phillips. I think that we need a solid veteran like him around next year.

Murray keeps talking about opening spots for the new recruits next year. I hope he means that Kuba needs a new home. Moving Phillips is the wrong target, in my opinion.

Phillips is gone. Gonchar will be gone too. NOBODY will take kuba. I'm hoping we can get another pick in the top-5 as well. 3-5 years we can be contenders again. Especially with a new gm and coach.

Good deal for all involved. Especially us.

Phillips is a liability at both ends of the ice. Why do we want him taking ice-time from the kids? We're in a major rebuild.

If you want to make an omelette...

That deal would be amazing (leafs pick).

@Rob R. & Jeremy Milks: The scenario you describe, Phillips departing for the playoffs in return for a pick and then returning in the summer, is the ideal situation for the Sens as far as development goes. Next year's young kids get to learn from an old hand who knows the city, has grown up in the organization, and is a stand up guy.

There are, however, two elements that work against this. First, Phillips agent will almost assuredly advise him to consider other offers on the open market. In this thin free agent market, Phillips will be among the better available veteran defensemen, and Ottawa will not be the only team asking for his services. Second, Senators coaching and management, with which Phillips is familiar and seemingly comfortable, will be changed in the off season. The uncertainty of who will be coaching and managing the team going forward will weigh against an early commitment to a return to Ottawa.

That all said, Ottawa is in a good position to bid for his services in the off season: lots of cap space, and the promise of playing significant minutes.

My best guess is that Phillips will be traded to Boston along with Ottawa's 2nd round pick for the Toronto 1st round pick. Then Bryan Murray and Eugene Melnyk will push hard to ensure the next Senators GM signs him July 1st.

Henceforth I hope for the following: Phillips, Ruutu and Ottawa's 3rd to the Bruins for the Toronto 1st round pick. Come on!