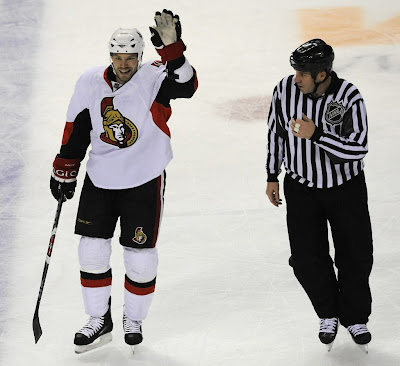 With the expected news that well liked agitator had finally been traded - to the Ducks, where he'll fit in perfectly - it gives us our last chance to play these classics, starting with the radio call by Dave "The Voice" Schreiber and Gord Wilson of Ruutu's scrap with the Thrashers Jim Slater back in 2008. The fight was a beauty, but the call was even better.

Here's the video of the scrap with a slightly less exciting call. Ruutu may have been primarily an agitator, but he also backed it up by fighting and rarely lost a tussle when he did.

He was also a very willing participant in the Battle of Ontario, even though the rivalry had cooled a little by the time he came on board. Ruutu is an underrated hitter and here's the proof.

The timing for Ruutu's deal is a little tough for fans, with the annual Sens Skill Competition on Monday. Ever since Ruutu's been here, he's been the star of the show. Who could forget this classic with the wig and the puck on a string. Genius.

Ruutu is also the only Senator player to do something as awesome as this:

And finally, Ruutu had his own hilarious tribute song before he even got to Ottawa. If this gets in your head, you are doomed.

It was inevitable that Ruutu would get traded due to the poor state of the team and his UFA status, but the Finnish agitator was an important player on this team for the short time he was here, and provided a lot of bizarre entertainment for Sens fans.

He'll be missed.
Posted by Jeremy Milks at 9:13 PM

I wasn't to keen on him when we signed him, but I became a fan of his over time. He'll be missed. He did a good job with Kelly and Neil.

I just hope that the fans give Kelly some love tonight. He deserves it. I thought that he was a great role player for the Sens. Very undervalued. There's no way that Condra's going to replace Kelly. They're dreaming.

In any case, I'd love to see Kelly back with the Sens someday.

He was an absolute sideshow and drew attention to himself through a series of disgraceful acts such as biting Andrew Peters and pointing to himself against Montreal. Low skill, low talent and completely unneeded on the team with a propensity for bad penalties due to his rep.

Good riddance and don't let the door hit you on the way out.