Fisher and Phillips Could Be A Package Deal 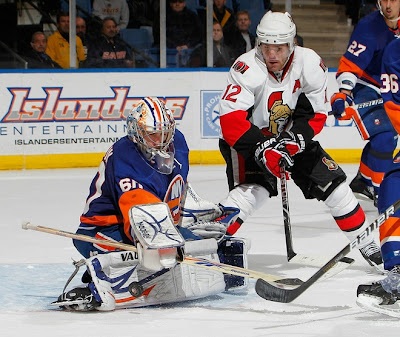 99% of all NHL talk nowadays is either on headshots or on trade rumours. That is all the media and the fans can agree is interesting about the modern game.

Since I am borderline nauseated by the reactionary movement to wipe the game clean of all violence (fighting will be next, as I predicted here), I will turn my attention to the other permanent topic of trade rumours, something I rarely get into too much, simply because I don't know how you can credibly write about rumours to begin with.

But this is the one time of the season where trade rumours can seem that much more credible and it's undoubtedly fun for fans to wonder what their teams are going to do at the deadline.

And for the first time in a while, Senators fans can expect major changes by the end of the month, and likely a new direction for the franchise if some longtime core players get moved, as per speculation.

Undoubtedly, the big gem out there for Ottawa is the fact that Boston GM Peter Chiarelli has publicly stated that he'd be willing to trade that first round pick he got from Toronto in the Phil Kessel trade, and that he has already been proposed a deal that he is currently mulling over.

Did he get that offer from Ottawa? Would the Bruins be willing to part with that pick for the final pieces to their Stanley Cup puzzle?

Those final pieces could very well be Chris Phillips and Mike Fisher. Both are hardened playoff warriors with Stanley Cup final experience and both might be available for the first time in their careers. The B's have already been looking for another defenseman, but with Marc Savard out for the season (and the cap relief it affords), that opens up a spot for a big time centre.

The Bruins need to make a run now because they don't know how much longer Tim Thomas is going to be this good and they have a guy like Zdeno Chara nearing the end of his prime. This could push Chiarelli to make one of those statement trades that set up a team for a big run.

The Senators would have to take back a salary as well (Blake Wheeler?), but with all the cap room created, that wouldn't be a problem.

The big sell for Sens fans here is a possible 1-2 picking order in the first round this June, especially if they continue to surge towards rock bottom and the Leafs don't improve much down the stretch.

Imagine this scenario for a moment:

They get both Gabriel Landeskog and Adam Larsson. Two Swedish blue-chippers to join a future Swedish core of Erik Karlsson, David Rundblad and Robin Lehner. Not to mention a world-class mentor in Daniel Alfredsson who has at least one more good season in him.

Needless to say, this is a dream scenario, but is it likely?

Murray would need to get a lot in return for both Fisher and Phillips who have been cornerstones for so long. That number one pick would be a good start. But, as with all rumours, there is a .0001% chance this exact scenario happens. Add to the fact that this would be an intra-division trade between two rivals and the odds go down further.

But we're all allowed to wonder at this time of year, and for Sens fans, this trade deadline should be the most exciting in franchise history, if only as a respite against what has been a horribly embarrassing year by the team in red and black.
Posted by Jeremy Milks at 9:03 PM

not a bad plan except it is probably going to look like a 3rd 9the sens own) overall and a 5-8th(Boston/Toronto's) overall.

Without a doubt, the draft offers a lot of hope. But, it's still a bit of a crap shoot.

If we manage to land Toronto's first pick for Phillips and Fisher, it's a good bet that the fan base would be pretty happy. But should we be?

Many of the NHL's studs, were top five picks. But, for every stud, you have players who did not hit that potential.

For instance, would dealing Fisher and Phillips for a player that ends up being Phil Kessel be considered a good deal? He was a top 5 pick. How about Nathan Horton? Or Steven Weiss? Or Cam Barker? Or James Van Riemsdyk? Luke Schenn? Benoit Pouliot?

I know, I know you can also get a Stamkos, or Malkin, or Toews, or Doughty ...

My bias is that I don't want to give up proven contributors like Fisher and Phillips. They both have had bad years, like the rest of the team. I still believe that they have many good years left. They also know how to win.

The thing that worries me about the Sens is that we are purging the organization of the guys who have won a lot of NHL games. As we get the influx of youth, you can bet that the pundits will start talking about our lack of playoff experience.

For a team that went 12 straight years in the playoffs, it's strange that we'll end up as a team that lacks playoff experience.

I hope Fisher and Phillips stay. Phillips has a full NTC that was contractually negotiated in good faith. He has every right to exercise that right without any guilt whatsoever. I hope that he uses his clause if his desire is to remain a Sen.

Nugent-Hopkins is better prospect than landeskog. He'll be the first forward selected at either #1 or 2. Larsson and RNH are pulling away from the pack now. And Huberdeau and Strome are creeping up behind them.

Anon 207 is phillips. Bye Chris, thanks for the 10 years of great hockey.

Though Fisher was traded to Nashville this afternoon, I'd still like to see the Sens ship Phillips (and maybe Ruutu) to Boston for that 1st rounder. I don't know if Boston is really going to need Savard's production in the post season as much as they will really like to have the playoff experience that Phillips and Ruutu will bring to the table. This is especially true at LW, since the Bruins have Lucic, Thornton, Seguin, (Marc Savard) as their top 4 LWs right now; not exactly overflowing with playoff experience.