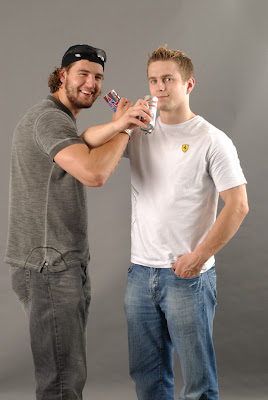 Chris Phillips first goal of the year to give his team a two goal cushion over the Flyers in the third was perfect timing no matter how the next two days plays out for the franchise defenseman. It could be his last goal in a Senators uniform and it at least gave him a chance to hear the fans roar for him one more time (he's scored some big goals over the years). It also reinforced just how popular the Big Rig is amongst his teammates. He was mobbed by the players on the ice after his point shot beat Brian Boucher, and the celebration continued on the bench with seemingly everyone wanting to go over and congratulate him, including the coaching staff. It's been a tough year on and off the ice for Phillips and it was nice to see a huge grin on his face again...... Speaking of Phillips, if he's traded, who's going to be the guy to stand by the bench after every win and glove tap every player who comes off the ice? Just like Lyndon Slewidge winking and giving the thumbs up, the Sens theme song and half hour parking lot waits, the Phillips glove tap after wins is a Senators tradition we don't want to see lost......

.....It's too bad both GM Pierre Gauthier and coach Jacques Martin are unavailable for the Senators in their current rebuild. The last time the Senators were in a similarly bleak situation was about halfway through the 95-96 season when it looked like the first attempt to build a winner was going backwards after a hot start in October. New GM Gauthier brought in Martin in late January and the Senators made the playoffs the following year. Martin would be the perfect coach for this current Sens team. During his time with Ottawa, Martin ably handled young defensemen like Wade Redden, Chris Phillips, Stan Neckar, Karel Rachunek and Anton Volchenkov. Ironically, Cory Clouston has been criticised for being too conservative with the all the offensive players on his team, but with a young defense coming in next season, that's the type of system they are going to have to implement. While I doubt Clouston will be around next year, it's almost certain Martin won't be available unless the Habs colossally implode down the stretch here, and that's just doesn't happen on a Martin coached team. I'm convinced Martin could coach an AHL team to a .500 record in the NHL if he had to. Whoever is coaching the Senators next year might be faced with the same task.......

......Pascal Leclaire. What's to say? The closest Senators fans got to see what he was capable of was his brief stint in relief of Brian Elliott in last year's first round playoff loss to the Penguins. He was unbelievable at times but that was all she wrote. It only seems appropriate that he spend the rest of his Senators career in Bingo, as he owes that organization a lot of man games as they constantly had to ship Mike Brodeur and Robin Lehner to fill his spot, putting them in a tough situation for close to two seasons. I wonder if they have those magically healing hot tubs in the wonderfully modern Broome County Veterans Memorial Arena?..... But hey, that old rink has a lot of history, and not all of it hockey. Here's a partial list of some of the bands who have ripped it up on that stage: Elvis Presley, Bob Dylan, Kiss, Johnny Cash, The Beach Boys, Tom Petty, AC/DC, Neil Diamond, Motley Crue, Elton John, and most special of all, folks - Kenny G.....

....Speaking of Elliott, I watched most of his Colorado debut against the Oilers, and it was same old, same old. A lot of sitting back in his crease and looking smaller than he really is. I still don't really understand that move by Colorado. The Senators made out like bandits with Craig Anderson in tow. A great move by Bryan Murray, even if Anderson walks this summer. The point is that Elliott is now someone else's problem and the Sens can move forward without that lingering doubt in their heads that was there everytime Elliott took to the ice. Elliott didn't fare much better against Los Angeles today although he did make 38 saves in a 4-2 loss.....Remember Alex Auld and his gold mask? He's been on three NHL teams since leaving Bytown and has only gotten 11 starts behind Carey Price in Montreal, but the new mask he's been wearing lately is a beauty. ..... So is Brian Boucher's of the Flyers. Simple is always better on goalie masks. What's the point of all those intricate designs with details that no one can see?......Great article today by the Sun's Don Brennan about the need to keep Chris Neil in town. Nice to see the Sun not trying to run a player out of town for a change..... Here's hoping the Sens change their centre ice logo after next season (I assume they will go with the All-Star game logo next year). The big cartoon logo doesn't even fit in the circle and the red line runs across it. They should go with the "O" logo at centre ice and have one on each side of the red line like a lot of teams used to do back in the day instead of the "big blob" approach the Sens have taken.

..... Yes, that photo above is former Senator Andrej Meszaros with current Sen Marek Svatos, the context of which I couldn't find. But if they were related it would be a decent candidate for AwkwardFamilyPhotos.com...... Congratulations to Erik Condra on his first NHL goal. That was genuine joy on his face after he potted a sneaky Ryan Shannon feed from the back of the net. When he scored his second of the game off of an Erik Karlsson point shot, he looked more astonished than anything else. With so many veterans on the Senators for the last five years, the sight of a rookie overjoyed at getting his first goal was not too common, although no one will ever beat Nick Foligno's jump in the air to honour his old man Mike Foligno after his first goal a few years back. Even if the Senators don't win many games the rest of this year (or next), it is a welcome sight to see all that youthful enthusiasm that had been missing from this team for a while......With that being said, I still don't like the Chris Kelly trade, but then again I've been griping about the Meszaros trade ever since it happened too. You probably don't want me to go into that spiel again....

....Completely agree with Don Cherry during his segment tonight about NHL linesmen constantly throwing guys out of the faceoff circle. This has been going on for years and it seems Cherry is the only one who says anything about it. When a faceoff takes over 30 seconds because a linesman is tossing multiple guys, you start to wonder if some of these guys are suffering from "referee envy". Just drop the puck......With the Rangers picking up soon to be UFA Bryan McCabe, and the Habs grabbing Brent Sopel last week, who's still in the running to grab Chris Phillips anyways? To me, the Sharks could use Phillips more than anybody, but with the relatively low price that McCabe fetched - Tim Kennedy and a third rounder - the Sens would be much better off keeping the Big Rig. If you don't get a first rounder or an early second, what's the point? I suppose we'll know soon enough how it will all turn out....

Wow. Alexei Kovalev wins the game for Pittsburgh in the shootout with a perfect shot to beat James Reimer. Coach Dan Bylsma is playing him close to twenty minutes in his first two games. He's going to help the Pens, no matter how much he was despised during his time in Ottawa. People tend to forget he was very good for the Senators for a big portion of 2009-2010 and was playing on one good leg for the most of the first half of this season. But he looks strange wearing number 72....
Posted by Jeremy Milks at 10:04 PM

Sure he can still score once in a while, and on the shootout, but have you been watching all the standard Kovy turnovers and lackluster defensive play? Anyone know what his plus minus is so far with the Pens?

Nope, can't say I miss Kovy at all in Ottawa. Give me rookies scoring their first goals over that garbage any day.

1. Absolutely right about Auld. He's consistently got amazing masks, and his Habs one is outstanding.

2. Right on about Kovy. I'm not sad he was traded (although I liked him in Ottawa, and the return was pathetic), but I'll be happy if he has success in Pittsburgh.

I found Brennan's article cringe-inducing, to be honest. From the gushing fanboy tone to the inference that you can take games off if you've played enough (toward the end, he says picking your spots is ok) it was nothing more than a full-page fluffing of Neil. I'm not entirely surprised, seeing it is Don and he's in love with grinders and fighters (see his recent love affair with Zenon Konopka) but this isn't what's needed from media. We need neutral and cold looks at situations and fact-based analysis. A breakdown of his fights by weight class, fights per season, goals per season/assists per season, penalties drawn...there is just so much more Don could have done. Instead, he went for the gushing fanboy/emotional route, which is a surefire alarm going off in a newspaper or reporter's story.

You need to step away from things to examine them with clarity, I'm not sure Don is able to do that.

Peter, you have to take the money into account with his overall performance this year, when you look at the return for Kovy. No trade clause or not, I'm not sure too many GM's wanted to pay him what he had left on his contract, knowing how much of a gamble he is on and off the ice. And judging by his play alone this year, I would classify his trade as "addition by subtraction".

Yeah he had a few good stretches last year, and I wasn't unhappy about the initial signing, even though they had to pay him too much. He also got conveniently hot leading up to the deadline this year. But on the whole, he has been an albatros around Murray's neck this year. Unloading him for nothing was a good move IMHO.