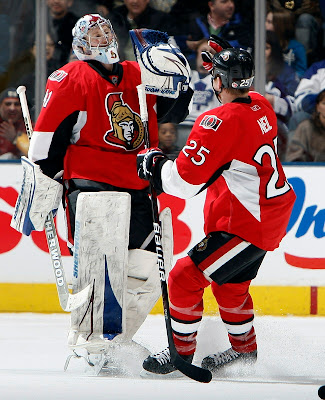 With Craig Anderson allowing only one goal in the two games he's played in a Senators uniform, it makes you wonder what this team would look like right now if they had gotten that kind of goaltending early in the season when they actually needed it (and when they still had Mike Fisher and Chris Kelly down the middle).

It just goes to prove the old maxim - goaltending is everything in hockey.

If you have confidence in the guy back there, everything changes.

The big test will be Friday in Buffalo where the suddenly happy looking Sens will face the even more joyous Sabres who are basking in the aftermath of having a new owner who not only loves the team and the city, but openly cried talking about his "hero" Gilbert Perreault.

There could be so many positive vibes going on from both sides that a group hug might be more appropriate.

Unless Francis Lessard, the skating dump truck (and that's a compliment by the way), has anything to say about it.

The posts have been light here lately and will stay that way for the rest of the week as I am busy with some other important things this week. We should be back to normal by the end of the weekend (or if a big trade happens in the meantime), just in time to see if Chris Phillips remains a Senator.

I'm betting he stays, as will Chris Neil.

Because if Neil goes, I might just pack it in. And take up knitting or something.
Posted by Jeremy Milks at 9:50 PM

I don't think you can ascribe too much importance to Anderson in these games.

His first game was against an offensively-challenged Leafs team, they literally score two goals at most per game.
Last night was against another bottom-feeder.

On top of all that, these are no-pressure games. I saw a great blog comment...described Anderson as goaltending's Jason Spezza. Awesome and putting up gaudy stats when there is nothing on the line and the pressure is off, everyone is playing loose. The question is, can he win you the Stanley Cup? Can he win you 35-40 games? Can he play under pressure?

Right now...hanging your hat on beating Florida and Toronto? Elliott also shut out Toronto remember? And the team beat Florida last time too? Let's see if he allows one goal to Philly. I'd imagine he doesn't, which would just prove me right, that Anderson (like Spezza) thrives against bottom-feeders.