The Fans Knew Long Before The Press Even Woke Up 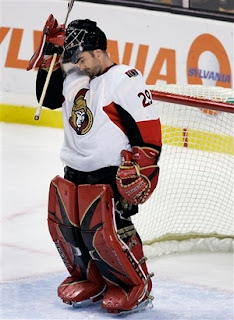 They might be feeling queasy about it, but the Ottawa press is now being forced to do their homework on a rapidly declining John Paddock. Must be tough doing all that investigative journalism stuff, eh boys?
The Ottawa Sun's Chris Stevenson wrote his first article all year where he actually questioned the tactics of Paddock and made a mention of something that fans and bloggers have been harping on all year - first line burnout.
Stevenson even brought the goods with an anonymous quote from a Senators player.
From the Ottawa Sun:
"Jason Spezza, Daniel Alfredsson and Dany Heatley, upon whom Paddock leaned so heavily earlier this season, have been playing like they are burned out lately. Alfredsson topped 26 minutes in five games as the calendar turned to December and played more than 24 minutes in 10 of the first 17 games.
"I could have told you this was going to happen back in October," said one player the other day. "
Not to bury the local beat writers, but they have been woefully inadequate in their analysis all season long and for some reason have largely went for the soft touch. It actually took TSN's Brent Wallace to break the story that the coach had "lost the room", even though guys like Stevenson, Bruce Garrioch, Wayne Scanlan and Allen Panzeri have been as close to this team as anyone over the past decade. (Don Brennan might be the only writer to have addressed any of these issues all season long.)
The fact that Stevenson is now reporting dissension in the room feels at least a month too late. Even then, Stevenson felt it more important to go after the easy scapegoat in Ray Emery. Quote:
"This next point benefits from hindsight, but Paddock also has to take his share of responsibility for allowing Ray Emery to get away with his lack of work ethic earlier this season, which now seems to have buried the goaltender in a hole from which he appears incapable of escaping. In the process of coddling Emery and looking the other way for his transgressions, the Senators have likely alienated Martin Gerber. "
It seems way too convenient to blame a team's woes on an immature 24 year old who can't find his game. If Stevenson really believes that this is what brought Paddock down then he's just being intellectually lazy. It might be easier to write yet another Emery bashing piece but even just a casual investigation would reveal that the coaching tactics of Paddock are the real culprit and have been all season long.
This year, the local writers were living on an island, ignoring growing fan unrest and content to write pieces straight from the template where it is gospel that if the team is playing badly, it must be that they're not working hard enough, or it's a Stanley Cup hangover, or it's one players fault etc. etc. Perhaps it was the reporters who were hungover.
It seems evident now that players were complaining to the writers but they didn't report on it.
For guys who work in an industry that is being threatened by other, more immediate forms of media, they certainly have a lackadaisical approach.
I also fail to see any mention of how Martin Gerber dressed down his defenseman Anton Volchenkov in front of the bench and on the ice for daring an attempt to block a puck for him. Volchenkov has been sacrificing his body all season long for Gerber yet no one raises an eyebrow when the goalie has a meltdown and castigates Volchenkov in front of his teammates.
Instead, we are supposed to feel sorry for how Paddock has "alienated" Martin Gerber.
Someone get me a barf bag.
Posted by Jeremy Milks at 8:21 AM

So the media gets their way after one day and the senosphere's been on it for weeks and gets nowhere?