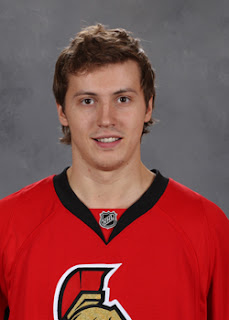 Here's Alex Nikulin's newest blog. For those of you who haven't been following this story, Nikulin is a Senators prospect from Russia who has been writing a blog since he participated in the Sens rookie camp. It's notable because Nikulin is a very thoughtful individual and usually fills the reader in on inside stuff that the fans never really get to hear. See previous entries here,
here, and here.

In this latest entry, Nikulin sounds lonely as he grinds out the AHL schedule on the buses, cramming Big Mac's and watching movies.

From a translation at HFBoards.

As it was explained to me, the road trip to Norfolk was the farthest for our team. It really did take a long time getting there, 9 hours. But I must admit everything went much easier than I anticipated. The bus had all the amenities, even wireless Internet. And after all, the roads in the US are much better than even in Moscow, to say nothing of the rest of Russia. Because of that the trip went by unnoticeably. We made just one stop at a McDonald’s, where I bought something to eat.

I’m not a big fan of looking out windows, so I can’t share much about the views. I watched movies, played computer games, browsed the Internet, slept. We arrived at our destination around 10 PM and right away checked into a hotel.

Perhaps it was the road, or something else happened, but we were a totally different team in the first game. I won’t speak for anyone else, but I personally played my worst game. I think we somehow weren’t prepared. We could do absolutely nothing. The legs did not move. You seem to make one stride, but then the legs block up. And our goalie didn’t have the best night. Anyway, I want to forget that game as quickly as possible.

But the second game turned out quite differently. We were probably angry after losing 5-1. And the opponent relaxed after an easy win. But it’s not like we had nothing to do with the success. We played a totally different game. And Norfolk is a good team. Tall defensemen, and just the whole team is very big. The forwards are technical. I liked the opposition.

By the way, these two games for Binghamton I spent on the same line. We are the first line with Danny Bois and Denis Hamel. We spend approximately 20 minutes on the ice. Our line has been the most successful thus far. Bois has five points in five games, I have four, and Hamel has three.

Do I get tired? I wouldn’t say I do, not too much. Disregarding the first game against Norfolk, where I felt exhausted after each stride, I have enough strength. But you definitely tire a lot more here than you do in the Russian Superleague. But honestly, it’s hard to compare like that. Russia has larger rinks, a wholly different type of hockey, space to skate. You skate less here, but it’s very intense. You must constantly hit your opponent and they hit you all the time. But I feel that we have a very strong team, although I’ve seen little of others. If we can avoid such setbacks like with Norfolk, then everything will be all right.

There’s no news from Ottawa. Nobody says anything. But it’s not customary to discuss that here. Anything can happen at any moment. They’ll say “get ready”, and you’ll be going up to the big team. But I’m very happy with how Ottawa is performing in the regular season. Taking out anyone who’s in their way.

By the way, a physical trainer from the Senators came to our club. The main team had four days off, and he spent a few training sessions with us. We did coordination exercises. Did things we didn’t do before. For example, running with a parachute on the back. It must be noted that that’s rather difficult.

I also want to mention that I really miss my parents, friends, my girlfriend Natasha. Even though she’s supposed to come over, there are certain difficulties with obtaining an American visa. She was already denied once. Maybe somebody at the US embassy reads this blog, or people that are in that field? Hopefully, they could help. "
Posted by Jeremy Milks at 9:53 AM